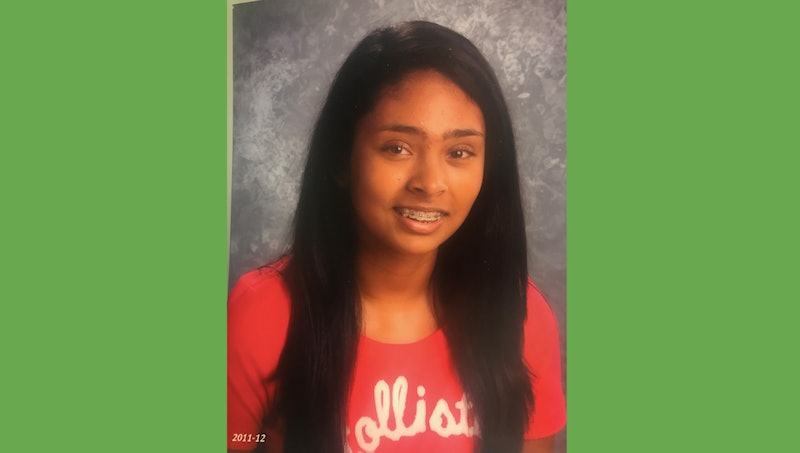 My mom says that the day I told her I wanted blonde hair, her heart broke. I was around seven or eight years old. But it was true; before I even hit my deserved years of teen angst, I had daydreams of running my fingers through stick-straight, blonde hair. Hair so thin and glossy that maybe only a strand or two would stick together, nothing a simple shake of the head couldn’t fix. Hair that I could only get if I was white.

I grew up in a suburb of Sacramento, an upper-middle class area that is dominantly white. When my mom’s family moved there in the late '70s, my mom was one of four people of color at her high school — another of which was her older brother. The area has definitely become more diverse since the late '70s, but not enough. I grew up in the same K-12 education system that was filled with faces that didn’t look like mine, hair that didn’t twist and tangle like mine. There weren’t enough faces like mine for me to feel like I could fit in. There wasn’t enough hair like mine for me to feel like I could be beautiful, too.

I wanted blonde hair because all of my friends had blonde hair. All of my friends that had blonde hair were the most beautiful girls in the world — not just to me, but to every boy we grew up with. With their fair skin and silky blonde hair, my friends had admirers in every grade, and absolutely no problem attracting the immediate attention of whomever it was they were crushing on that week. With my dark brown skin and frizzy curls, I quickly became the “funny friend.” Everyone knows the funny friend: She’s cool and she’s nice; she can crack a joke and make the group laugh, but she’s not really anyone’s “type.” I became the funny friend simply because the male gaze — and society’s tendency to mold beauty standards around it — did not seem to have room for me. It all came down to the fact that blonde and fair-skinned meant pretty, while the dark complexion of my body meant that I wasn’t.

If I could make my hair somehow less, then maybe I would fit in more.

It is an impenetrable idea that someone like me — dark brown with dark, curly hair; not white, essentially — will never reach society’s definition of desirable. Years went by, and this theory always seemed to prove itself right. It felt like a rule. So much so, that it’s something I still carry with me. It would never matter what I do; I cannot erase the color of my skin or whatever stupid presumptions that come with it.

But boy, did I try to. I started with my hair. If I could make my hair somehow less, then maybe I would fit in more. If it was pin-straight and shiny, maybe people would forget about the rest of me; I would look exactly like my friends and heed the same attention. Once I hit seventh grade — around 12 years old — I flat-ironed my hair to no end. I would wake up a whole 30 minutes earlier to do my hair before school, as opposed to the zero extra minutes it takes to let it air-dry after a shower. It felt worth it though, because I would have stick-straight hair to walk into school with, hair that fit in with the other girls. I could finally have hair that I could smoothly run my fingers through. But by the end of one school year, it seemed I had damaged my hair to the point of no return. I felt a little guilty; would the curls ever return?

I am slowly teaching myself not to mind that my hair takes up a lot of space.

They did. This last year, I chopped my hair a few inches and it twisted back into its natural state: a giant mess of springy curls. More often than not, it dries weird and the front pieces frizz — so much so that I'll just tie it up into a ponytail, not wanting to deal with it. But every so often, it'll dry just right, and the curls are perfectly defined spirals and suddenly, I am my very own definition of beautiful. I straighten my hair about two times a year — a complete 180 from my middle school routine. I’ll even leave my hair natural for interviews, photos, and other important events in a deliberate effort to refute the idea that straight, contained hair is more professional, and still, more beautiful. I am slowly teaching myself not to mind that my hair takes up a lot of space. I resist the urge to plug in the flat iron because straight hair simply isn't me — my big, frizzy curls are. That is always going to be my beautiful.

I am still not inclined to think of myself as a confident woman. I often count myself out of dating opportunities simply because I am not "that girl" — but what I really think about is the fact that I'm not white. I'm not white, and I will never have the confidence that comes with matching the skin tone of every modern trope of beauty. But my frizzy hair and my gangly, dark legs are what make me, me. Maybe I'll be the only one in the room who looks like this, and that's OK. I am never going to have the blonde hair that I asked my mother for, and that's OK too.

There’s a song out now, on Beyoncé’s new album, The Lion King: The Gift, which she produced in conjunction with the release of the movie. There is a song on the album called “Brown Skin Girl,” which features Blue Ivy, her daughter. It starts and ends with Blue Ivy singing: “Brown skin girl / Your skin just like pearls / The best thing in the world / Never trade you for anybody else.” I played this song in the car with my mom one day over summer, and she brought up the time I told her I wanted blonde hair. I told her that it’s gotten a whole lot better, but that I wish I had songs like this one when I was younger. I get chills every time that I listen to this song; the significance of Blue Ivy singing those words — knowing these are words her mother wants her to understand at a young age, knowing what she’ll later face — almost brings me to tears.

So I'll keep listening to “Brown Skin Girl” and I'll keep getting chills, knowing that a whole generation of little brown girls will dance to a song that's all about their own kind of beautiful. But who says I'm done growing? Maybe it can be for me, too.

More like this
Bustle Newsletter: August 2, 2022
By Stephanie Talmadge
25 Things I've Reduced My Life To, In Addition To WFH In My PJs
By Ginny Hogan
The Spiritual Meaning Of The August 2022 New Moon
By Nina Kahn
How To Change Your Twitter Handle
By Emma Carey
Get Even More From Bustle — Sign Up For The Newsletter