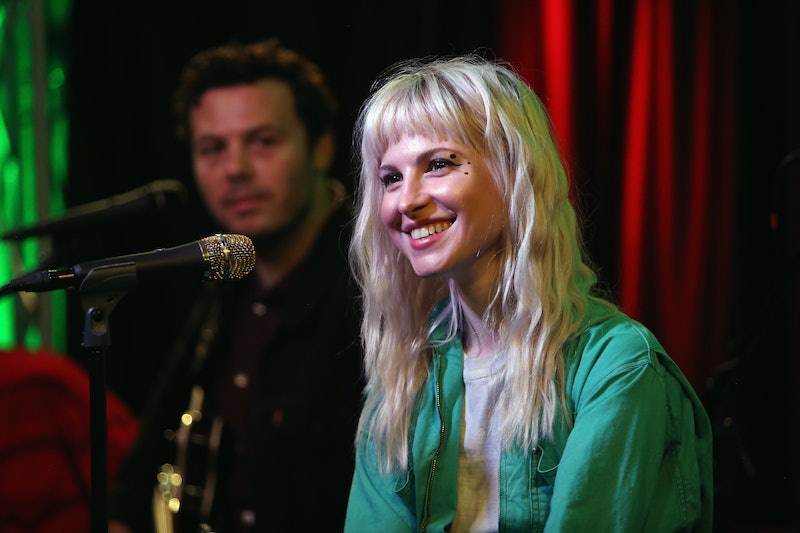 Paramore may have been one of the biggest pop-punk bands of the 2000s, but on the road to success their front woman had to endure quite a lot of terrible treatment. In a new interview with Vulture, Hayley Williams opened up about the sexism she faced during the Warped Tour, especially when she was just starting out as a teenager in the pop-punk scene.

As the only female musician in the band — which she founded in the early 2000s with her friends, Josh and Zac Farro — Williams recalled often being treated very differently than her male counterparts, and was even asked if she was "the merch girl" at her own shows. However, once the band was offered the chance to play the now-legendary Warped Tour in 2005, Williams was forced to endure an entirely new level of sexism in the music industry.

"I did not know how toxic that world could be," she recalled, referring to the "brutally misogynistic" emo and pop-punk scene of the early-to-mid-2000s. "We got offered Warped tour, and there was a caveat: 'It’s a stage called the Shiragirl Stage. It’s all female,'" Williams explained. "I was pissed! I wanted to qualify for a real stage. ... As a 16-year-old who had dreams of playing with the big boys, it felt like we were being slighted."

The "stage" that teenage Williams and Paramore did play on was actually "a truck that had a flatbed on it. It was so flimsy it would shake and fall apart," she recalled, adding that there was only one other female-fronted band touring with them at the time. "People were gawking," Williams recalled. "They were confused, like, What’s in this for me? What’s she singing about? I’m a guy — how do I relate?"

The following year, Paramore played the Warped Tour again on a "slightly bigger stage," as Williams recalled — but the way she was treated didn't get any better. "That was the year of the f*cking condoms," she said, referring to the fact that Trojan Condoms was one of the Warper Tour's sponsors in 2006. "I got condoms thrown at me. ... We were in San Diego or San Francisco, and a condom flew at me, and it stuck to my chest while I performed. I was so embarrassed."

A bit later, Williams recalled, Paramore was sharing a tour bus with the band Straylight Run when "one of their friends said something about my p*ssy. In front of me." While she no longer remembers what the comment was — "I saw red so fast," Williams explained — the singer was outraged that everyone on the bus seemed to laugh it off like it was no big deal. "I was literally 16, about to turn 17. Everyone was laughing. ... I was like, 'Why do you think it’s cool to refer to my p*ssy?'" (Williams recalled Taking Back Sunday's John Nolan and Straylight Run's Michelle DaRosa standing up for her in the moment.)

Nowadays, Williams makes sure to surround herself with other female musicians who understand what it's like being a woman in the industry, and praises the "amazing guys" in her bands for their support. "I’m at the point now where if someone can’t call themselves a feminist, male or female, I’m like, 'What are you then?'" Williams explained. "I wish it didn’t have to be a word — feminism. It’s just common decency." Hopefully, by speaking out about her own experiences, Williams is helping to ensure that other musicians are treated with the decency that they deserve.

More like this
Cruz Beckham Teased New Music With An Adorable Nod To Mom Victoria Beckham
By Stephanie Topacio Long
Twitter Can’t Believe The Madonna Biopic Is Scrapped & Fans Have A Solution
By Alyssa Lapid
Hilary Duff's Husband Matthew Koma Has Her Name Tattooed On His Butt
By Jake Viswanath and Stephanie Downs
Prince Harry Incorrectly Recites Christina Aguilera’s “Genie In A Bottle” Lyrics
By Jake Viswanath
Get Even More From Bustle — Sign Up For The Newsletter
From hair trends to relationship advice, our daily newsletter has everything you need to sound like a person who’s on TikTok, even if you aren’t.