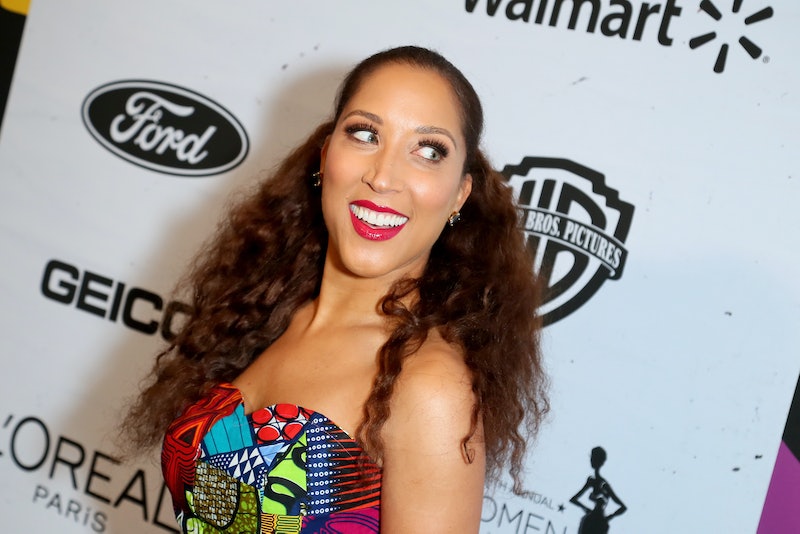 HBO's venture into sketch comedy features some stellar Black women — and some stellar Black women only. A Black Lady Sketch Show officially has a premiere date, and it will fill your Insecure void. A Black Lady Sketch Show, a half-hour sketch comedy created and written by comedian Robin Thede, will debut on HBO on Friday, August 2 at 11 p.m. The series, which is executive produced by Insecure veteran Issa Rae, will star Thede in a "narrative series set in a limitless magical reality full of dynamic, hilarious characters and celebrity guests," according to the press release. More so, A Black Lady Sketch Show will break new, historical ground with sketches that are written by, directed by, and star a core cast of predominantly Black female performers. The series will also star Ashley Nicole Black, Gabrielle Dennis, and Quinta Brunson.

Thede will also serve as executive producer alongside Rae. The comedian is known for her talk show The Rundown with Robin Thede, which ran for one season on BET between 2017 and 2018. Prior to her stint as a TV host, Thede served as a head writer and correspondent for The Nightly Show with Larry Wilmore on Comedy Central. Notably, in 2016, the comedian worked as a lead writer for the White House Correspondents' Dinner, which made her the first-ever African American female head writer for the event, per Deadline. According to her IMDb, Thede’s writing credits span The Queen Latifah Show and several BET Awards. She's also appeared in TV shows such as Key and Peele and Difficult People.

Thede took to Twitter on Monday, July 1 to celebrate news of the premiere. She wrote, "I created [A Black Lady Sketch Show] to amplify just some of the many incredible black ladies in comedy and am so proud of it!! ALSO IT’S FUNNY AF."

A Black Lady Sketch Show falls under Rae’s overall deal with HBO. The comedian’s upcoming projects with the network include two other series, Sweet Life and Him or Her. According to Variety, Sweet Life will be a coming-of-age tale about teens in “an affluent, predominantly African-American community in Los Angeles,” while Him or Her follows “a Black man’s bisexual dating life."

Rae, who gained prominence for her hit HBO series Insecure, has long championed the representative need for more Black women in the media. In an interview with TIME, the prolific comedian spoke about how the need for strong Black women on TV informed the creation of Insecure. Rae told TIME in 2017,

“I remember feeling insecure in my own life and wondering, ‘Am I doing this right?’ So the show is about just that — two Black girlfriends navigating their love lives, jobs and each other. Right now, there is this need to portray Black women on TV as strong, flawless and fierce. It's great to have that representation, but I wanted there to be a real, human portrayal. I've never seen two dark-skinned Black girls in lead roles painted as regular people. I really just thought that would be cool to see.”

With Season 4 of Insecure delayed until sometime in 2020, A Black Lady Sketch Show serves as the perfect alternative, and a sure to be stellar showcase for some serious talent.

More like this
The Black Lotus Staff Has "Had Enough" In The 'White Lotus' Spoof From 'SNL'
By Brad Witter
'Succession' Season 4 Will Be An "Absolute Banger" According To Cousin Greg
By Bustle Staff
'Ted Lasso' Season 3 Might Be Its Last
By Zosha Millman and Grace Wehniainen
Everything To Know About A Potential 'Lockwood & Co.' Season 2
By Gretchen Smail
Get Even More From Bustle — Sign Up For The Newsletter
From hair trends to relationship advice, our daily newsletter has everything you need to sound like a person who’s on TikTok, even if you aren’t.