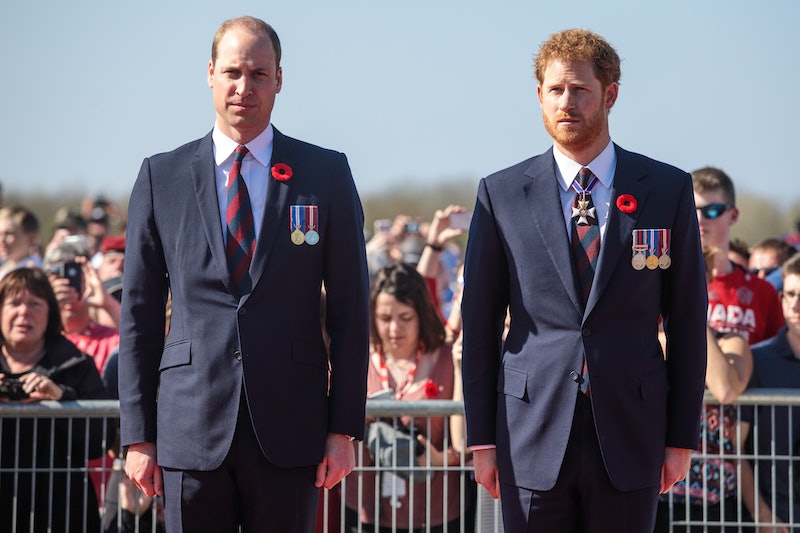 I don't necessarily consider myself an Anglophile, but I have always been fascinated by Princess Diana. And after watching HBO's new documentary Diana, Our Mother: Her Life And Legacy, I feel as if I have a better sense of the late princess — which makes the film all the more poignant. Diana's death was obviously enormously worse for those who actually knew her rather than fans like myself who just admired her from afar, and understandably, it still burdens her two sons every day. As such, one of the most moving aspects of the documentary is Prince William and Harry's revelation about their regret concerning their mother's last day before she passed.

In the film, out July 24, a thorough picture of Princess Diana's life is painted, beginning with her early childhood. The more you learn about her, the more you admire her and, consequently, the sadder you feel that she passed away at only 36 years old. William and Harry were 15 and 12, respectively, at the time of their mother's death, and they'd been in Scotland, presumably with their father and grandmother, while Diana was in Paris. The boys were used to spending time apart from their mother, as many children of divorced parents are, royal or not. They'd also become used to daily phone calls with Diana during the periods they were apart, and so since these phone calls were both routine and obligatory — a recipe for apathy — William and Harry recall, in the doc, treating each call insignificantly.

The call that William and Harry had on August 31, 1997 was no different any before, and they understandably treated it as such. Tragically, that conversation was the last they'd have with their mom. Watching the doc, I understood William and Harry's remorseful tone when recalling that day, remembering my own seemingly trivial last conversations with loved ones who've passed. William and Harry, as they share in the doc, have deep regrets about that day, which is such a shame, as they did what everyone does every day: approach our quotidian activities as if they're insignificant.

William and Harry's heartbreaking confessions about the day their mom passed away are so relatable, regardless of the duo's royal status. Their honesty in the documentary makes for a beautiful homage to their mother, as Diana never forgot the shared humanity that unites everyone and transcends borders made by class, race, ability, and age. Her sons have done a beautiful job of continuing that legacy.

More like this
Rupert Grint Just Shared A *Major* Update About Ron Weasley’s Future
By El Hunt
Anne Hathaway Shared A "Thrilling" 'Princess Diaries 3' Update
By Darshita Goyal
Twitter Is Overjoyed By Angela Bassett’s Record-Making Oscar Nomination
By Maxine Harrison
The 'Scream 6' Trailer Shows Off Hayden Panettiere's Return & Ghostface In NYC
By Jack Irvin and Jake Viswanath
Get Even More From Bustle — Sign Up For The Newsletter
From hair trends to relationship advice, our daily newsletter has everything you need to sound like a person who’s on TikTok, even if you aren’t.