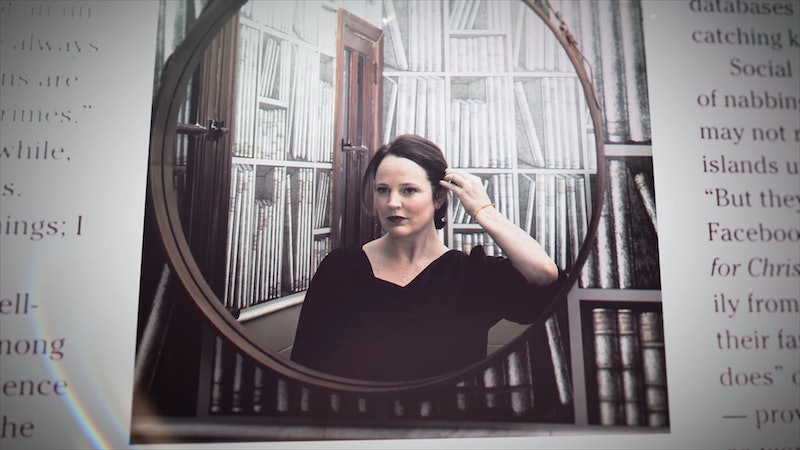 When Liz Garbus was tapped to direct an HBO mini-series based on the true crime best-seller I'll Be Gone In the Dark, the book didn't exist. It was still being revised for posthumous publication following Michelle McNamara's 2016 death, the cause of which was ruled to be the result of a combination of drugs in her system and an undiagnosed heart condition. But McNamara's husband, the comedian and author Patton Oswalt, knew he couldn't let his wife's work go unfinished. So he called the literary agent he and McNamara shared. "It was this general feeling of, 'I've got to finish this book,'" Oswalt says of the story, which documents the unsolved murders and rapes of the Golden State Killer alongside McNamara's growing compulsion to catch him. "But then it was also this feeling of, 'I know that I can't finish the book myself.' I can't write at her level of skill."

With the enthusiastic support of McNamara's publisher, Oswalt handed off his wife's unfinished manuscript — her laptop, her iPhone videos, the writing, the notes, the legal boxes crammed with years of hunches and suspect lists and ephemera — to true crime investigative reporter Billy Jensen and researcher Paul Haynes, who McNamara had met on the A&E true crime message boards almost a decade earlier. "And luckily Paul and Billy stepped up," Oswalt says. The book went on to reach No. 1 on the New York Times Best Seller list just weeks after its February 2018 publication.

McNamara's story then fell to Garbus, a career documentarian who's worked on projects including Netflix's true crime series The Innocence Files and the HBO documentary Who Killed Garrett Phillips?. "[We thought she] would be a person with the dexterity to deal with the intertwining story lines," Nancy Abraham, HBO's co-head of documentary and family programming, told the New York Times. "[And that] she would probably relate to and have an affinity with Michelle McNamara."

For Garbus, reading the book was just step one. Next, she had to reckon with the troves of research left behind by McNamara, who may have started out as an amateur sleuth but by 2013 had already written a definitive magazine story on the Golden State Killer. In fact, she's the one who coined the nickname. On top of working with her fellow citizen investigators for years, McNamara had developed productive working relationships with retired and active detectives.

"Michelle had this experience when law enforcement shared with her what she called The Motherlode. It was all of these boxes, and she had to spend time going through them," Garbus says. The documentary team then repeated the same process, sifting through files and getting them digitized. "What was really exciting to us as storytellers was that we really felt like Michelle could be leading us through this journey, that it wasn't going to be a past tense, other people talking about Michelle and her investigation and her obsession. She really could be a first-person narrator of her journey."

And that was true, at least at the beginning of production. But on April 24, 2018 — the crew's first day of filming — prosecutors arrested former cop Joseph DeAngelo in connection to the case (DeAngelo's trial is still ongoing, but he has offered to plead guilty). Seeing the Golden State Killer caught was McNamara's greatest professional ambition; it also meant Garbus' team was suddenly without a roadmap. "It was a day of [asking], 'Where do we go from here?' Because we were shaping the narrative a certain way," Oswalt remembers.

Ultimately, the team decided to follow the new developments past the end of McNamara's book, even including interviews with DeAngelo's family. For Garbus, it wasn't a turn off course but an extension of the road the author had already paved. "He was caught in a way that Michelle predicted he would be caught, which was through DNA technology. And of course he did meet a lot of the criteria that she expected he would meet," says Garbus, who proceeded cautiously. "Yes, it was irresistible to want to know more about him, although we never wanted to shift the focus away from the survivors and their stories, and of course Michelle and her journey."

It was still McNamara's story, even if she wasn't there to write it.