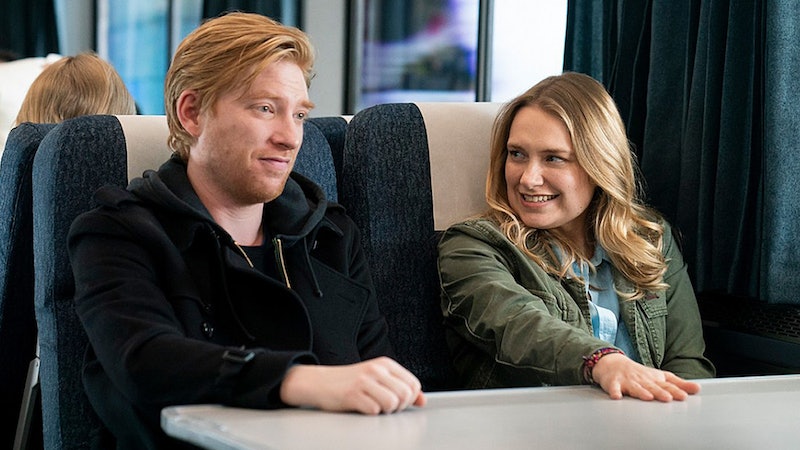 If you've ever fantasized about leaving the stresses of life behind and running away with a handsome Irish man, one upcoming HBO series might be a dream come true. Of course, the trailer for Run, starring Domhnall Gleeson and Merrit Weaver makes it clear that that very scenario isn't actually the fantasy it appears to be — especially if the person you're traveling with is harboring some mysterious secret.

Weaver stars as Ruby, a woman whose average life is turned upside down when her ex-boyfriend, Bill (Gleason) invites her to follow through on the pact they made together 17 years previously. At the time, the then-couple promised each other that if one of them sent the other a text saying simply, "RUN," they would meet at Grand Central Station in New York and embark on a cross-country train journey together.

When Ruby gets that text, in the very first moments of the trailer, something has sent her into a panic, but it looks like Bill is running from an even more perilous situation. "Do you wanna be here with me, or is this about something else?" Ruby asks, shortly after she's shown dumping out Bill's bag — which is filled with cash — onto a hotel bed. "Are you in trouble?"

Of course, Run isn't just a thriller about two people running away from their stresses and secrets — it's also a romantic comedy about a couple potentially rekindling an old flame during a cross-country trip. The trailer makes that very clear in the first sequence of Bill and Ruby on the train, where he pretends to be a stranger with a penchant for palm reading.

"You see this one very strong line, here? That is your heart line and that is deep. And there's a break in the middle," Bill says, while the trailer shows clips of his past romance with Ruby. "But the big news is," he continues with a smile, "that she meets the guy again. Soon. So, that's lovely for her." (No wonder Ruby is so willing to run away with him.)

Adding to the romantic comedy pedigree is that fact that Run is produced by Phoebe Waller-Bridge, who makes a brief cameo in the trailer as woman who needs help luring a badger into a van. The half-hour series is also created, written, and executive produced by Waller-Bridge's frequent collaborator, Vicky Jones, who helped her develop Fleabag and starred as Boo. In other words: it's Fleabag meets Killing Eve, and is guaranteed to be the ultimate addicting quarantine watch.

More like this
Who Plays Trent In 'Never Have I Ever'? Benjamin Norris Calls His Character A “Himbo Stoner”
By Grace Wehniainen and Radhika Menon
Gabby & Rachel Reveal How That 'Bachelorette' Rose Ceremony Twist Happened
By Grace Wehniainen
Netflix Reveals First Look At Wednesday In The 'Addams Family' Spinoff Series
By Bustle Editors
Here’s When 'She-Hulk' Takes Place In The MCU
By Brad Witter
Get Even More From Bustle — Sign Up For The Newsletter