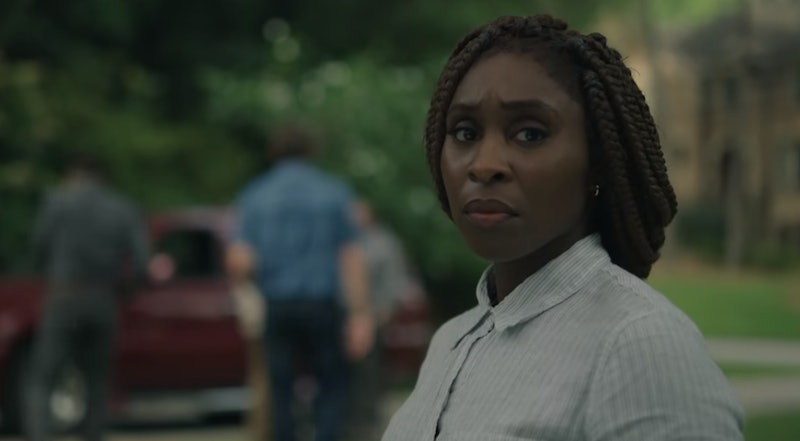 The genres of crime fiction and horror collide in the unnerving trailer for HBO's adaptation of Stephen King's The Outsider. Released in 2018, King's novel The Outsider was praised for mixing modern day politics with a dark story of a young boy's death and the man whose guilt would be a foregone conclusion if the police could only prove that he was in two places at once. Think True Detective with a supernatural twist.

Per Deadline, the series stars Cynthia Erivo, Ben Mendelsohn, and Jason Bateman. Mendelsohn plays Ralph Anderson, a detective who discovers the body of an 11-year-old boy in the woods of a small town in Georgia. All of the forensic evidence points to Terry Maitland (Bateman), a little league coach and teacher who claims he has an alibi for the night of the murder. When his story checks out, Ralph brings in a private investigator who specializes in the unexplainable — Erivo's Holly Gibney.

In the trailer, Ralph tells Holly that he "has no tolerance for the unexplainable," to which the PI replies, "Well then, sir, then you'll have no tolerance for me." Up until Erivo's arrival in the trailer, The Outsider appears to be another dark crime drama in the vein of True Detective or Broadchurch, but her Holly's mysterious gift signals that the story includes King's trademark horror touches.

When the book was released in 2018, King was praised for how he straddled genres while incorporating modern political anxieties into the story. The Guardian's review went so far as to suggest this was the horror maestro's exploration of the fake news culture, writing, "You could see The Outsider as King’s take on fake news, moving it from the political realm to something more personal. Lies being sold as truth: what form could that concept take?"

There is a certain kind of ripped from the headlines anxiety permeating the trailer, but it's unclear how much the show will grapple with the political undertones found in King's story — the footage HBO has shared so far isn't overtly political. What is clear is that Bateman was instrumental to bringing the novel to the small screen so soon after its publication. Not only does the Ozark actor play a key role in the series, he's also producing via his company, Aggregate Films, and, as reported by Entertainment Weekly, he'll direct the first two episodes.

Whether or not The Outsider touches on America's charged political atmosphere, it will definitely allow Bateman to continue to explore playing darker characters as the story behind Terry's whereabouts unfolds.

The first two episodes of HBO's 10-episode adaptation of The Outsider will air back-to-back on Sunday, Jan. 12.

More like this
Netflix Shut Down 'Bridgerton' S3 Rumours About A “Very Dark” Storyline
By Bustle
'The Queen’s Gambit' Season 2 Tweet Wasn’t From Anya Taylor-Joy
By Mary Kate McGrath, Jack Irvin and Grace Wehniainen
Bill & Frank’s 'The Last Of Us' Episode Has Twitter Emotionally Wrecked
By Alyssa Lapid
9 Time Catherine Cawood Was An Absolute Badass In Happy Valley
By Sophie McEvoy
Get Even More From Bustle — Sign Up For The Newsletter
From hair trends to relationship advice, our daily newsletter has everything you need to sound like a person who’s on TikTok, even if you aren’t.