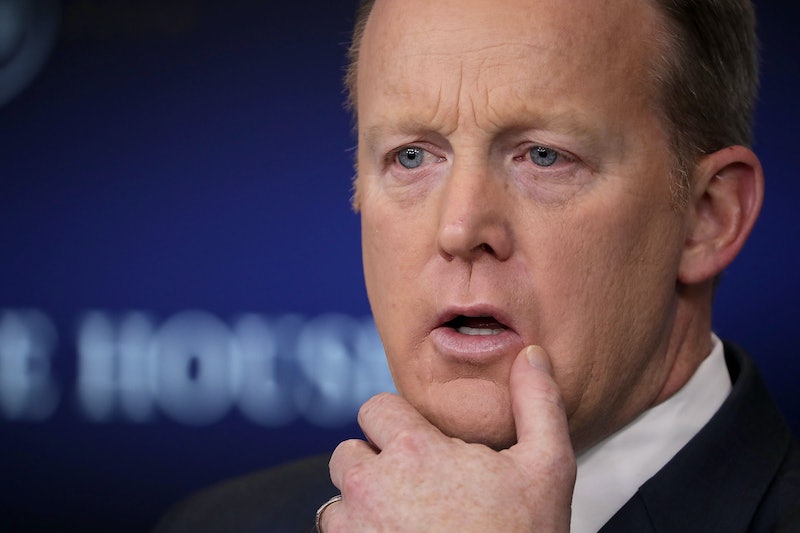 Donald Trump's six months of presidency has seen an endless series of whimpers and bangs. One of those whimpers is named Sean Spicer, and, with the biggest bang he could muster (basically the sound a slice of a slice of bologna hitting a room-temp Kraft single), Spicer resigned today from the position of White House press secretary.

His reasoning? The emotional and spiritual impact of lying — LOL JK, no, you silly baby birds. He didn't like the idea of Anthony Scaramucci as communications director.

As reported by The New York Times, Mr. Spicer told Mr. Trump that, "he believed the appointment of Mr. Scaramucci was a major mistake and said he was resigning, according to a person with direct knowledge of the exchange."

For six months, Sean Spicer has stood by and delivered the messaging of his unholy overlord with conviction and fervor. From travel bans to the true purpose of the Russia meeting, Spicer remained as on message as sub-humanly possible, protecting his boss (and his boss's son, daughter, chief of staff, other son, other other son, etc.) from any and all questioning. He did his job, even if he did not do it well. But now, it seems like all the fun and games and big little lies are over.

Sean Spicer kind of an pleasure, though. In six months, he gave us so much to remember him by — memes, scandals, and like, a bazillion questions. Let's do a little walk down memory lane...

He gave us good old fashioned racism and misogynoir.

He gave us more props than a birthday clown.

The man loved charts more than Marshall from How I Met Your Mother.

He gave us Mr. Bean levels of bumble.

Never forget that time he wore his flag pin upside down. Literally never. Like the amount of time they' give Obama if he'd done it.

He gave us bush—but not that kind of bush, don't make it weird.

He legitimately hid in a bush, like we imagine we all would when asked to defend Donald Trump. As reported by The Washington Post, "White House press secretary Sean Spicer wrapped up his brief interview with Fox Business from the White House grounds late Tuesday night and then disappeared into the shadows, huddling with his staff behind a tall hedge. To get back to his office, Spicer would have to pass a swarm of reporters wanting to know why President Trump suddenly decided to fire [James Comey]."

He gave us Melissa McCarthy's finest work since Spy.

If any of us has a single solitary bit of softness directed at Spicer, it's because of Melissa McCarthy and the team at Saturday Night Live.

But above all else, he gave us lies. And one possibly impossible to answer question: is Sean Spicer a bad liar, a good liar, or perhaps, like a cheesy gordita crunch, a perfect combination of the two?

Can't Keep His Lies To Himself

Right out of the gate, like a majestic stallion bursting forth with strength and elegance and then tripping and falling in its own excrement, we came to know Spicey as the most visible member of the Inauguration Truther Movement, a group committed to the notion that not only was Donald Trump's presidential inauguration not sparsely attended or easily out-attended by the Women's March, but it was the most highly attended event of its kind, a Lollapallooza of MAGA-ry, if you will. To quote the man himself, "this was the largest audience to ever witness an inauguration, period."

And since then (which was his first day on the job) he's told lie after lie, which is presumably an occupational hazard of one's entire job being to lie about the lies a liar is telling. It seems like a lot of work, but that doesn't mean he was necessarily good at it. Spicer told lies like...

..how we totally understood what "covfefe" meant.

Look, that was months ago. It might as well have been a bottle episode of Wings at this point. But I know none of us fully understood what "covfefe" meant and even if we did, the president shouldn't be misspelling coffee in a late night rage tweet.

...that we were just "passing on news reports" regarding Barack Obama's wiretapping.

(Yes he ultimately said no, but MY GOD, MAN.)

“Um. The reason I’m going to have hedging on this is that I’m just thinking," he said in the press briefing. "Mentally, I’m going through every position in the United States government. In theory, if you were an operative of some sort. Uh, there are cases in which ― yeah, if it’s a public official, then no.”

And, true Spicey fashion, he even went out with a lie. Possibly a few.

"It's been an honor (lie #1) & a privilege (#2) to serve @POTUS@realDonaldTrump & this amazing country (#3--it's no Mother Russia). I will continue my service through August (#4--we're pretty sure he's packed up all the hedge trimmers for his hidin' bushes and gone home)"

Goodbye Spicey. We wish you all the best.