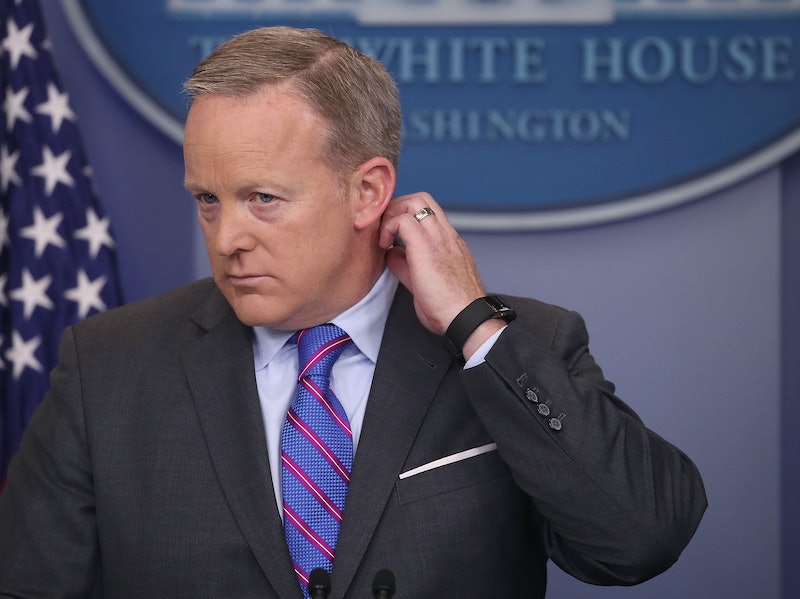 Amid the controversy surrounding FBI Director James Comey's firing, the administration's mouthpiece went to great lengths to avoid discussing it. White House Press Secretary Sean Spicer reportedly hid from reporters' questions about Comey with his staff — in a bush. According to The Washington Post, Spicer apparently gave up at last on the possibility of a clean getaway from the gaggle of reporters that stood between him and the safe enclave of the White House.

Normally, Spicer speaks with reporters in the White House press room. There are the flags, the stately podium, the designated areas for different players; there is an expected decorum in the press room that's been the norm throughout the decades. But none of that was present during last night's impromptu press conference, given reluctantly by Spicer in response to the explosive reports of Comey getting fired by President Trump. Instead, the brief Q&A took place on the White House lawn, after dark, following Spicer hiding out behind a "tall hedge."

Spicer insisted there be no filming of his answers, a bargaining chip to help move him from "behind bush" to "normal indoors," so one can only imagine the late-night presser and the sheer weirdness of the entire event unfolding. Spicer had been drawn outside in the first place for television damage control — Comey's forced departure from the FBI was reportedly more controversial than the White House had anticipated. As backlash ensued, Kellyanne Conway and Sarah Huckabee Sanders were called on to give interviews defending the POTUS decision, with 1600 Pennsylvania featured in the background.

The announcement that Comey was fired was grossly mismanaged, too. Most people prefer to hear of their firing before the rest of the world does, but no such luck for Comey. He learned of the news while speaking with FBI employees in Los Angeles, as headlines flashed across the TV screen that Trump had let him go. Comey reportedly thought it was an elaborate prank at first. The laughs didn't last long.

Rather than talk with Comey — "man to man," as President Trump would probably characterize it — the FBI received an email notification, and Trump sent his longtime bodyguard over to their headquarters with the official paperwork. Classy.

But nothing quite compares with Spicer's approach to announcing the news — which he did, initially, by shouting it at random to reporters who happened to be standing near the entrance to the press office. Spicer then scurried behind the door and locked it.

The reporters and their questions did not magically disappear, however. And thus it was that Spicer eventually found himself standing "between two tall hedges," according to the Post, facing a small but persistent group of journalists, giving them vague and not at all satisfactory answers to the onslaught of questions.

"Between two tall hedges" sounds a whole lot like the bizarre web series Between Two Ferns. And now that the ludicrous details of Spicer's evening on the White House lawn are available to all, the foliage placement — of both Spicer's presser and of Zach Galifianakis' show — is not the only similarity between the two that comes to mind.