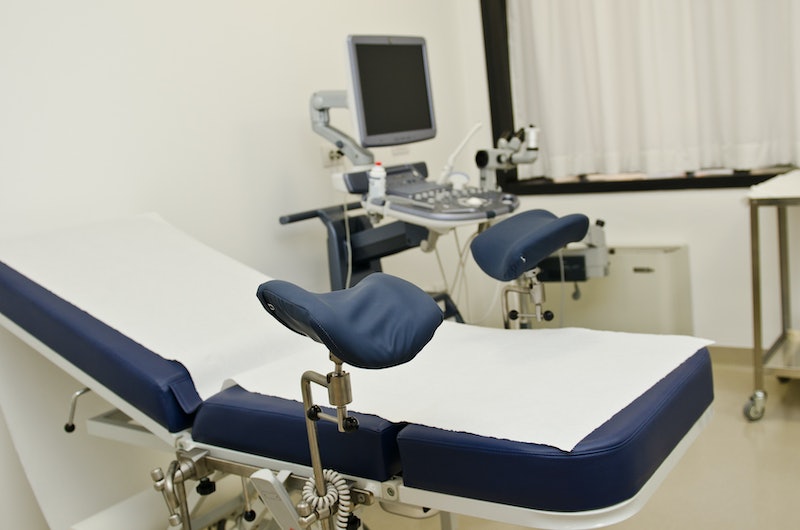 It's no secret that the LGBTQ community is notoriously underserved by healthcare professionals, and U.S. healthcare isn't so great for women either. But a new report from the Sunlight Foundation’s Web Integrity Project claims that healthcare resources for lesbian and bisexual women were reportedly removed from the government site WomensHealth.gov sometime between September and October 2017. Bustle has reached out to Health and Human Services (HHS), and we will update this post when we hear back.

The Sunlight Foundation is a nonprofit and nonpartisan organization focused on "making government and politics more accountable and transparent," according to its website. It published a pair of reports on Mar. 21 alleging that "the Office of Women's Health (OWH) removed a webpage with extensive information about lesbian and bisexual health, and links that correspond to that webpage, from its website." The Sunlight Foundation found that a PDF containing similar content to the content that was removed is still live on WomensHealth.gov, but "it is not linked from elsewhere [...] rendering it inaccessible by navigating through the website."

The Sunlight Foundation further stated, "The removals are part of a broader pattern of changes to the OWH website in which access to other informational resources, such as those pertaining to breast cancer, men’s health, healthy aging, and other health topics, in addition to lesbian and bisexual health, have also been reduced."

According to The Hill, a spokesperson for Health and Human Services (HHS), which manages the OWH and WomensHealth.gov, responded to the report by stating information contained in the now-deleted pages "was simply sent elsewhere as part of an effort to make the website mobile-ready that began in 2016."

The spokesperson said, "As OWH updates its site, the outdated lesbian and bisexual health pages were removed and the health content was integrated into the relevant health topics pages across the website. You can now find lesbian and bisexual health content by searching for relevant health topics on the WomensHealth.gov website."

As Jezebel reported, the organization behind the findings said the missing content could not be found, "nor were several of the pages apparently updated, as HHS had claimed." The Hill indicated an instance where the Sunlight Foundation researchers who authored the reports found that "there is no longer a page on the website containing answers to questions about lesbian and bisexual health, including 'What factors put lesbians' and bisexual women's health at risk?' and 'What challenges do lesbian and bisexual women face in the health care system?'"

The Hill also indicated that the PDF containing similar content was last updated in 2009, and according to Politico, "[t]he office’s Twitter account, @womenshealth, which has nearly 1 million followers, also has not mentioned LGBT health issues since a post on Nov. 11, 2016."

Andrew Bergman, Director of Policy of the Web Integrity Project at the Sunlight Foundation, told Politico that he and his researchers found smaller-scale removals on other webpages maintained by the HHS, "but the changes at the women's health website stand out."

"We've seen nothing this targeted at one HHS site," Bergman said. "The removal of lesbian and bisexual health materials in particular, without advance notice and in a targeted way, raise concerns that they’ve targeted information for vulnerable populations."

Advance public notice of information removal is required for compliance with federal record-keeping guidelines, according to The Hill.

Under the Trump administration, other offices have allegedly removed information from websites, including the Environmental Protection Agency deleting information regarding climate change. While the removed information can be easily accessed on other non-government webpages, its reported deletion from government websites implies that the information is not endorsed by the government. And in an era where people are increasingly treating scientifically supported facts like opinions, access to the objective truth is a precious commodity.