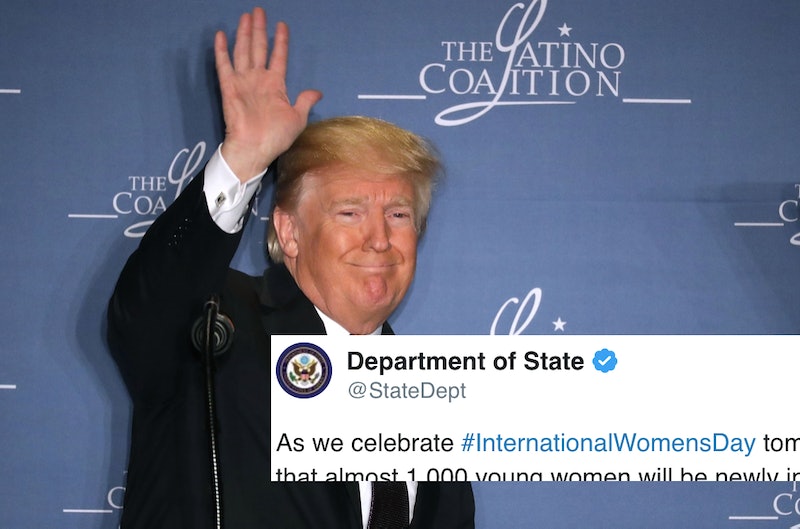 In several tweets on Wednesday afternoon, the State Department celebrated International Women's Day on Thursday, March 8, saying that it was committed to helping and "empowering" women around the world. But the tweets come after several decisions in the past year that would undermine women's health care globally, and that disconnect was not lost on HuffPost's senior political reporter Laura Bassett.

"The State Department is proudly tweeting about #internationalwomensday as if it didn’t just strip women’s health care from its global human rights report," Bassett tweeted, linking to her piece on the removal of reproductive rights language in the State Department's annual report.

According to a Politico report from February, several current and former State Department employees said they were told to cut passages related to the subject of reproductive health care from its human rights report. One current State Department official told Politico, “This sends a clear signal that women’s reproductive rights are not a priority for this administration, and that it’s not even a rights violation we must or should report on.”

Although it may sound like just another folder of reports, the annual human rights report is a critical document that helps the United States familiarize, update, and orient itself on human rights issues around the world. The annual documentation notes the progress and hurdles on the frontier of human rights, and is created, analyzed, and presented by various U.S. embassies throughout the world.

Politico noted that while the language in the reports can be bureaucratic and even “dry,” they nonetheless bring attention to significant human rights issues. The Politico piece stated that under President Barack Obama’s administration, these annual human rights reports were detailed, and backed by research and statistics. Under Trump’s presidency, that has reportedly changed.

The current State Department nonetheless tweeted with the hashtag #InternationalWomensDay several times, touting its own efforts at helping women around the world. It wrote about the Emergency Plan for Aids Relief program commitment to “empowering young women to write their own AIDS-free future.”

But its policies have shown otherwise. Bassett also noted in another tweet that "Trump's policies are literally shutting down family planning clinics around the world that provide condoms and HIV testing, and the State Dept. erased women's health from its annual human rights report." She also linked to a piece laying out how the administration has hurt reproductive rights internationally.

If the removal of women's health language from its annual human rights report wasn't concerning enough, last year, Trump reinstated the Global Gag Rule in an executive order. Surrounded by a group of men, Trump signed the order shortly after his inauguration. The rule forbids health care organizations from uttering "abortion" to patients, or risk being stripped of funding from the United States. By criminalizing abortion, the Global Gag Rule ends up exposing vulnerable women and girls to potentially fatal and illegal abortion services.

Trump also decided to pull funding from the United Nations Population Fund program in April 2017. The international family planning agency provides crucial education and support to poor communities and new families around the globe. Women from poor backgrounds rely on the UNFPA to learn to provide for their children, raise their families, and tend to their own physical and mental health with help from the program's resources.

Advocates say the current administration's record on women's rights is sordid. In fact, it's so abysmal that there are lists tracking distressing developments on this front. Should the State Department (and Trump himself) continue to tweet about International Women's Day on March 8, many social media users will be sure to take notice.