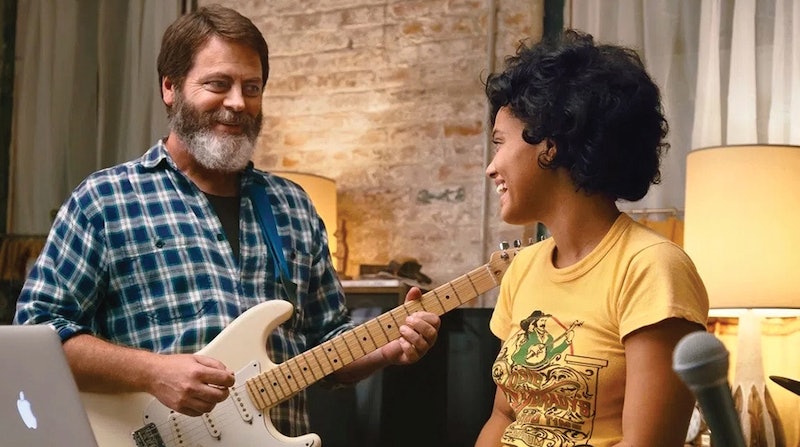 Picture a sweet comedy movie about a father named Frank and his daughter, Sam. He's white, she's a young woman of color. They disagree about her future plans as she eyes colleges. Occasionally, Sam's girlfriend swings by to stare deeply into her eyes and make out a bit when Frank's not home. Now imagine a world in which all of this is just how things are; it's reality, a condition of life and not a hurdle or impetus for family tumult or awkward Thanksgiving dinners. Imagine a world where this family just is. That's the world of Brett Haley's Hearts Beat Loud (costume designer: Melissa Vargas).

The film — acquired by Sony Pictures for wide distribution later in 2018 — follows Frank — a Brooklyn musician, owner of a failing record shop, and single dad — as he attempts to bond with his teenage daughter, Sam, before she heads off to to college to become a doctor. Sam's hardworking and dedicated to her studies, but one night, Frank is just enough of an annoying dad to get her to take a break, let loose in the family music studio (how very Brooklyn of them), and make some really fantastic music. Then Frank gets an idea. A really, really big idea. What if he can stave of the sadness of losing his record shop and his daughter all at once, and start a father-daughter band?

And the fact that his daughter has a girlfriend and that his late ex-wife is black thankfully play zero part in this brilliant plan. When actor Nick Offerman, who plays Frank, originally heard Haley's pitch for the film, its lack of socio-political focus roped him. "[Brett] said, 'Your wife who got killed was black, so your daughter is a light-skinned young woman of color, and she's gay, and we're not going to make any mention of it, because that's how some people are,'" he says, leaning back in a recliner at his lodge at the Sundance Film Festival. "It's just a movie about normal people, and I find that incredible moving. And again, it's a very simple touch, but it's profound."

For Kiersey Clemons, who plays Sam, the lack of political talk around race or gender was even more of a selling point, since it spoke to her identity as a young, queer woman of color in the real world.

"I've done a lot of projects that are specifically about being queer, or being a person of color, and as important as it is for those movies to exist because those messages need to be made and put on display, it's also nice to not have a point to make. To get to just exist the way that I do in life, in a movie," she says, when we speak shortly after the film's debut at the festival.

What's more is that she and her co-star Sasha Lane (who plays Sam's girlfriend in the film) actually used their experiences to tone the heavy-handedness of some of the film's writing down a notch when it came to having those political and social conversations. To Clemons and Lane, sweeping, resonant political statements aren't actually what two teenage girls in love would talk about. Luckily, Haley and the film's writers ("these older, white, straight men," per Clemons) welcomed the feedback with open arms. "Whether it was us discussing politics or, you know, discussing the fact that we have the same skin color or something, we kind of took all of that stuff out," she says. "Sasha and I tried to take our own life experiences, and make it as relatable and honest as possible." If the director and writers hadn't been this flexible, Clemons notes, she wouldn't have agreed to make the movie at all.

If you're surprised that a white, cis-gender male director and a writer with the same background were willing to give up so much creative control, you're not alone. "A lot of times, I get scripts from people that are trying to use their privilege to give opportunity to people of color and queer people, but at the same time they want to stick to their idea of what that is," Clemons says. "And although it might not be an insulting one, the fact that you're not hearing me isn't giving me an opportunity. You're still asking me to play by your rules. And also it feels like you're exploiting me in a sense. You're exploiting the fact that you're making it a trend. And this isn't a trend. It's not a movement. This is progression — this is life."

Hearts Beat Loud's creators resisted that urge to put their stamp on Clemons' and Lane's experiences (something Offerman says they'd be "foolish not to listen to them when they're offered"), and the result is something sweet and, more importantly, real. The film touches on feelings that could be picked up and placed into any family, anywhere, with any racial background or sexual orientation. By including, but not obsessing, over these kinds of details, Hearts Beat Loud has the ability to actually cross the aisle — to make family something that doesn't belong to one side of a political divide, something antithetical to the sensibilities of the Coastal Liberal Elite, of which Frank & Sam are definitely card-carrying members.

"It reaches more people. Because they aren't thinking about your race, they're not thinking about your sexuality ... they're watching the movie, which is about family and love and it goes to show that regardless of all of those things, we're feeling the same and we're all human," says Clemons. "It feels good."

And perhaps, if we had a few more films that truly approached life that way, we wouldn't have to reach so far to cross that aisle.

More like this
At 14, Pauline Chalamet Fell In Love & Danced ‘The Nutcracker’
By Grace Wehniainen
In 'The White Lotus,' Leo Woodall Gets His Moment
By Gabrielle Bondi
Elizabeth Debicki On Her Approach To The Most Debated Scene From 'The Crown'
By Grace Wehniainen
Melissa Barrera On Anxiety, Aloe Vera, & Finding Self Love
By Brittany Leitner
Get Even More From Bustle — Sign Up For The Newsletter