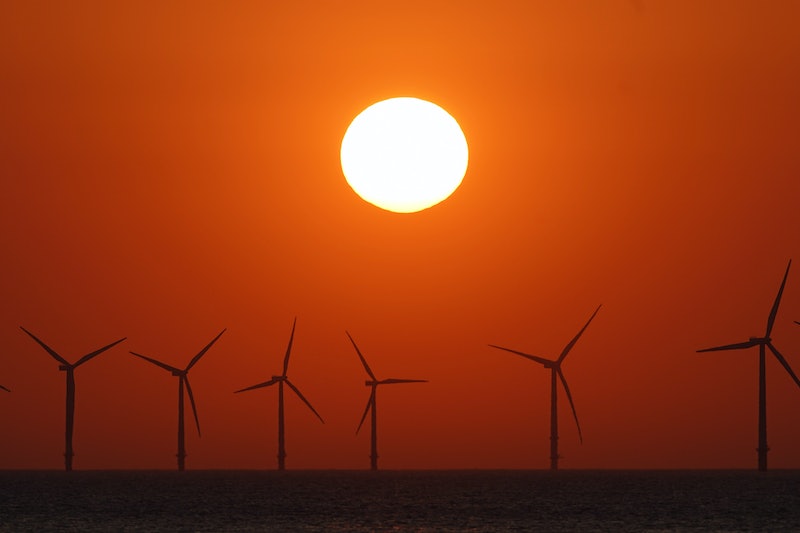 If you feel like this summer has, so far, been hotter than ever before, you're not wrong. Around the Fourth of July, meteorologists said that all-time heat records were not only being recorded all over the United States, but all over the world. Africa hit the highest temperature ever recorded, there were an estimated 70 deaths in Canada because of the heat, and a heat wave in the UK revealed signs of an ancient civilization. Here in the U.S., most cities, from Burlington, Vermont to Los Angeles, California, hit their highest temps yet... and it doesn't seem to be stopping any time soon. This kind of weather doesn't feel great and can be seriously dangerous to your health. If you also feel like it messes with your mind, you're not alone. In fact, a new study has found that heat waves might actually make it harder for you to think straight.

Researchers from the Harvard T.H. Can School of Public Health studied students in dorm rooms with and without air conditioning during a heat wave. The results, which were published in the journal PLOS Medicine, were that the students who studied through the heat with no air conditioning ended up performing worse on a series of cognitive tests. So if you've ever felt like the heat makes it harder for you to get anything done, this study is proof that it actually does exactly that.

Researchers looked at 44 students in Boston who were in their late teens and early 20s. While 24 of the students lived in air-conditioned buildings, 20 did not. The study was conducted over a 12-day period during the summer of 2016. The temperature for the fist five days was normal, then there was a five-day heat wave, then two days of cooler weather.

Throughout the study, each student was asked to take two tests on their smartphones after waking up each day. Researchers found that, during the heat wave, the students without air conditioning experienced decreases across five areas of cognitive function. The Boston Globe says, "The students, for example, experienced 13.4 percent longer reaction times on a test where they were asked to correctly identify the color of displayed words. They also had a 13.3 percent lower scores on basic arithmetic questions."

Interestingly enough, these differences were still apparent during the two days of cooler weather. Researchers say that this is evidence that the effects of a heat wave will actually hang around even after the heat is gone because it lingers in buildings. Joseph Allen, co-director of the Center for Climate, Health, and the Global Environment at the Chan School at Harvard, said, "Indoor temperatures often continue to rise even after outdoor temperatures subside, giving the false impression that the hazard has passed, when in fact, the 'indoor heat wave' continues." In other words, you might think that things are fine when the heat wave is over, but inside, it's a different story.

While these findings seem obvious to some of us, they serve as important proof that rising temperatures are affecting us in significant ways that we might not even fully realize. Jose Guillermo Cedeño-Laurent, research fellow at Harvard Chan School and lead author of the study, said that this study has "implications for basically millions of people that could be suffering this detriment to cognitive function." He hopes that the results will "drive a change in the way we approach climate change by making it personal."

Before this study, most of the research that was done on the health effects of heat have been done on groups of more elderly people, which may have led to the idea that heat waves don't really affect us in a way that we need to be concerned about. But Guillermo Cedeño-Laurent says that seeing how it affects other groups of people is essential, "considering that in many cities, such as Boston, the number of heat waves is projected to increase due to climate change."

Speaking with Bustle, New York-based neuropsychologist Dr. Sanam Hafeez elaborates, "When your body gets heated, your skin starts sending signals to, what else, the brain. It tells it to start pushing the heat out by sweating and increasing blood flow. Basically, your brain, to assist the body, goes into full survival mode. Cognitive functioning is what we call 'higher order' brain tasks, which take a back seat to surviving. Being uncomfortably warm is enough to distract you from finishing typing up your paper, or focusing on a conversation. To perform higher order mental tasks, the brain needs a little less pressure to help the body survive."

In other words, Dr. Hafeez says, when you're too hot, your brain is on survival mode and is focused more on making sure you stay physically healthy rather than completing basic tasks.

Previous research has shown that extremely high temps can lead to heat stroke and heat exhaustion. Other than these physical symptoms, the effects of heat waves haven't been studied much. Scientific American says, "One of the reasons for that is the main focus of the studies has been on mortality from heat waves, and there hasn't been that much focus on morbidity. That would take looking at people who are hospitalized from heat exhaustion or heat stroke and following them into the future."

As global temperatures continue to rise, extreme heat will continue to be a problem. Research like this isn't something anyone should be ignoring.