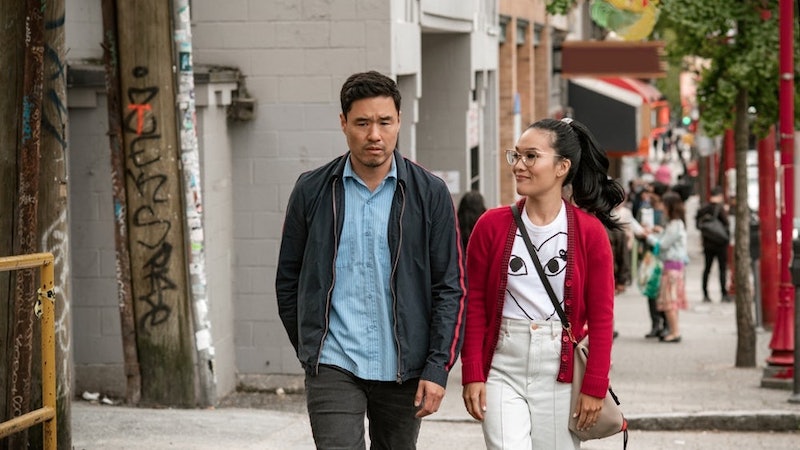 Ali Wong and Randall Park’s highly-anticipated rom-com Always Be My Maybe arrived on Netflix on Friday, May 31 to acclaimed fanfare. The film follows two childhood friends, Sasha (Wong) and Marcus (Park), who reconnect after 15 years and rekindle their romance against the backdrop of San Francisco. With Sasha as a renowned chef expanding her restaurant empire and Marcus as a stagnant rapper still living at home, the film explores the dynamics of two star-crossed lovers living in completely different worlds. With his role as Marcus, Park has charmed audiences with his rap proses as frontman of the film’s fictional band, Hello Peril. Following the film’s release, Hello Peril’s songs are now streaming, and the Always Be My Maybe band has a pivotal connection to Asian history.

With hilarious original tracks such as “Hello,” “Tennis Ball,” and “I Punched Keanu Reeves," Hello Peril's songs are now available to stream on Spotify, Apple, and Amazon. Inspired by experiences with his own hip-hop group during the '90s, Park co-wrote the verses with veteran hip-hop producer Dan the Automator. The results are three original tracks that explore gentrification, tennis balls, and, well, punching Keanu Reeves. But silliness aside, viewers were quick to piece together the significance behind Hello Peril’s moniker after the film’s release: Hello Peril serves as a word play on “Yellow Peril,” the 19th century term for anti-Asian fear in the West, which in turn led to the Chinese Exclusion Act in 1882. This, reportedly combined with everyone’s favorite Sanrio feline Hello Kitty, laid the groundwork for Hello Peril.

In an interview with Pitchfork, Park confirmed the influence of "Yellow Peril" in Hello Peril's conception. With his background in Asian-American studies at UCLA, he explained that the moniker just “naturally worked itself into the story.”

“I wanted it to be an Asian-American band, and the name is a take on the historical term ‘yellow peril,’ which is basically the Western fear of the Far East taking over. The concept of yellow peril has repeated itself throughout history, and it felt like something Marcus would have named the band, because he’s a community guy and he knows his history. Ali and I both have a background in Asian-American studies, but we didn’t sit down and say, ‘Let’s have an Asian-American studies type of name for the band.’ It naturally worked itself into the story.”

During the interview, Park also discussed the process of creating Hello Peril’s most memorable track, “I Punched Keanu Reeves,” which plays during the film’s end credits. According to Park, Reeves even played a hand at crafting the lyrics. Park told Pitchfork, “Basically, I wanted to write a tribute to Keanu, because he’s such a big part of all our lives and because he actually agreed to be in our movie. The song’s called ‘I Punched Keanu Reeves,’ so we had to get his permission. I sent him an email with some of the lyrics and asked if it would be OK, and he was totally down. He even gave some suggestions.”

“In the original version, most of it was just a tribute to Keanu and there was one line that referenced the love story with Sasha. He’s the one who suggested we actually bring that part out a little more. It was really important to him that the music be about their love story and less about him, because he cares about the project more than himself. So I expanded on that part in the second verse and it made the song really special.”

Always Be My Maybe is available to stream on Netflix. With its thoughtful references to Asian history and hilarious bops about Keanu Reeves, the rom-com is clearly a required stream for the masses.

More like this
Lisa Marie Presley's Secret Granddaughter Was Revealed At Her Funeral Out Of Nowhere
By Jake Viswanath
Adam Lambert Called Out The George Michael Biopic Over Potential Casting
By Sam Ramsden
Rihanna Shares Video Of 'Black Panther 2' Filmmakers' First Reaction To “Lift Me Up”
By Radhika Menon
You’ll Definitely Recognise The Stars Of Amy Winehouse’s Biopic
By Maxine Harrison
Get Even More From Bustle — Sign Up For The Newsletter
From hair trends to relationship advice, our daily newsletter has everything you need to sound like a person who’s on TikTok, even if you aren’t.