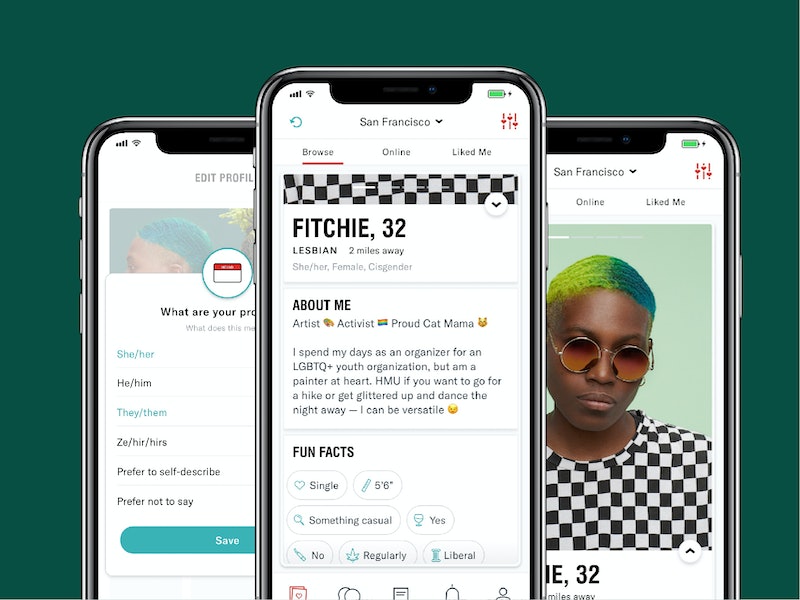 From faith to a shared dislike of certain things (like onions or country music) to common interests, there are a lot of dating apps out there that cater to a variety of audiences. But there are few dating apps dedicated exclusively to queer folks. HER, a dating app "for queer womxn by queer womxn," provides a safe space for queer women to connect in-app and at IRL events. And HER is about to get even better with a profile update for "radical expression of queer identities," which will include 18 sexuality options, 17 gender options, and space for your pronouns and zodiac sign.

"We used to have profiles that worked a lot like Pinterest, and we've been getting feedback from users for a long time. They really wanted a way to use words, to have a bio, and kind of share more information about themselves," Robyn Exton, founder and CEO of HER, tells Bustle. The update will allow users to add their pronouns to their profile, let users select more than one sexual orientation and gender, and include information about which each orientation and gender means. In addition, users can connect based on dietary preferences, astrology, pet preferences, and more. For example, if you're a vegan who likes cats and only wants to date Virgos, you can now filter to find someone else who feels the same on HER.

The update will happen in two stages, with stage one happening now and stage two rolling out in the next few months. "Without giving too much away, we’ll just say that from Butch Daddy Dykes to Femme Pillow Queens... there’s a lot to look forward to," HER said in a statement about the update emailed to Bustle.

The update was designed with a committee of people of varying genders and identities. In addition, people from the HER office in San Francisco regularly went into a local queer bar to share proposed versions of the app update with members of the queer community and asked for feedback, Exton says.

Some of the new filters will address specific, non-negotiable things. For example, "Some people who don't drink alcohol might only want to date other people who don't drink alcohol," Exton says. She adds that in addition to these types of filters, the update is loaded with playful filters, and all of the filters are opt in, which means you can choose the ones you want and leave the ones you don't.

Aside from the dating aspect of the app, known as the Meet Section, users can connect around interest in different topics and communities. If you want to join HER, you can download the app for both Apple and Android. The free version of the app includes the ability to view profiles, get matches, add friends, start chats, view events, and join communities. If you upgrade to HER premium, which starts at $14.99 a month, you can see who's online now, use filters, and more. What's more, HER hosts live events in 15 cities around the world. And with over 4 million users, it's the ideal app to meet the "her" for you.