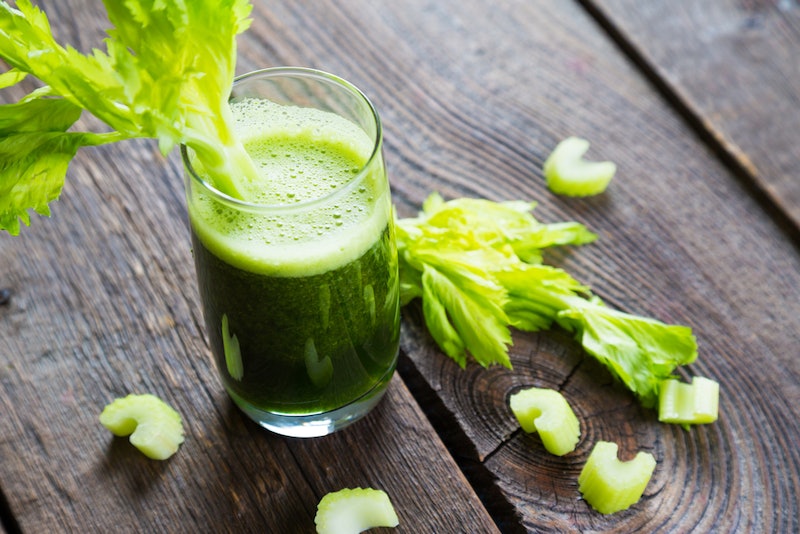 At this point, you've probably heard about celery juice. It's one of the latest health trends that has taken over social media, with everyone from your friends to bloggers to celebrities singing its praises. Celery juice — which is literally just juiced celery and some added water - is supposed to have a whole host of benefits. Medical Medium Anthony William took to Goop to call it a "miracle juice," saying it can help with digestion, give energy, and help heal chronic illnesses. It's hard not to wonder if this is mostly just hype - and to be curious about just how much celery juice affects your immune system.

After all, it would be pretty amazing if celery juice really does have all of these benefits. It's easy to make, it's fairly accessible, and it doesn't taste that bad (if you like celery, that is). The instructions are easy to follow: it's recommended that you drink a glass of celery juice each morning on an empty stomach. But it's almost hard to believe that something so simple could do so many positive things for your body, like boosting your immune system.

Bustle spoke about it with Dr. Peyton Berookim, MD, FACG, a double board-certified gastroenterologist who is the Director of the Gastroenterology Institute of Southern California, one of the most cutting-edge digestive health institutions in the world. Dr. Berookim explained why there's so much hype around the juice, saying, "It is believed that the sodium cluster salt found in celery juice is responsible for killing all the pathogens, known as 'the bad guys,' flushing out the toxins, restoring gut and liver health and thereby boost ones immune system. The proposed benefits on your immune system could be provided by the vitamins such as vitamins A and C, as well as folic acid which are found in celery, like other vegetables."

So is it actually going to be that beneficial to your immune system? Bustle also spoke with Registered Dietitian Nutritionist, Malina Malkani, MS, RDN, CDN, Media Spokesperson for the Academy of Nutrition and Dietetics and Creator of the Wholitarian™ Lifestyle, to get the lowdown. "It's not a magic cure-all. There is scant, if any, scientific evidence to support the majority of health claims about drinking celery juice, or the idea that drinking celery juice is better for you than eating celery whole," she tells Bustle. "In general, if a food fad, diet or service sounds too good to be true, you can assume that it is."

While this means that celery juice is perhaps not the "miracle juice" it has been called, that doesn't mean it does nothing good for you. Samantha Cassetty, RD, OMG! Nutrition Chief Nutrition Officer, told Bustle that celery juice (and just regular celery) "supplies an array of vitamins, minerals, and protective plant substances that may protect you from cellular damage and inflammation. These processes are associated with many chronic diseases, so consuming foods with protective compounds can help lower your risk. Plus, celery has a type of fiber that can nourish the healthy bacteria in your gut. When beneficial gut bacteria thrive, it gives your immune system a boost, helping to offset certain diseases and illnesses."

It's worth noting, though, that when you juice celery, you often lose that fiber. Rachael Hartley, RD, LD, Certified Intuitive Eating Counselor, told Bustle, "The only difference between celery juice and celery is that the juice is lacking the fiber in the whole vegetable." So, actually, you might be better off skipping the juicing part just eating celery stalks.

Malkani says something similar, stating that there is evidence that whole celery has many health benefits. "Whole celery has anti-inflammatory properties that promote the health of the gut lining and may help regulate digestion," she says. Plus, she says that celery has a high percentage of water and electrolytes, which helps you stay hydrated. But again, she adds, "However, no studies support the claim that celery juice offers similar benefits."

Dr. Berookim backs that up as well, saying that while celery juice helps you ingest more celery than you maybe would if you were eating the stalks, it "doesn't necessarily provide any more nutritional benefits than just eating raw celery."

Are there any benefits at all to drinking celery juice? Sure — Celery is good for you, and as Hartley points out, "Celery juice would provide nutrients like vitamin K, potassium, folate, and magnesium." Cassetty noted that if your celery juice is replacing what would have been an otherwise unhealthy breakfast, then that's a good thing. However, she points out that the same can be said for many different vegetables, so there's nothing that stands out too much about celery juice, at least based on the research out there so far.

Basically, there is no harm in drinking celery juice each morning, and if it makes you feel good, then go for it! But it's not going to magically transform your immune system. As Hartley says, "The immune system is extremely complex, and while nutrition does play a role in it, it has more to do with eating adequately and getting a variety of foods and nutrients than any single food being an 'immune booster.'" Focus on a diet rich in vegetables and healthy options, and you'll likely see the same benefits.

More like this
On TikTok, Tinned Fish Date Night Is The Latest Viral Food Obsession
By Emma Carey
10 Pumpkin Recipes That Are Way More Creative Than Pie & Lattes
By Rebecca Deczynski and Alexis Morillo
This Psychological Effect Might Be Keeping You From Hitting Your Goals
By Lexi Inks
10 Ways To Be More Empathetic To Your Partner
By Raven Ishak and Lexi Inks
Get Even More From Bustle — Sign Up For The Newsletter