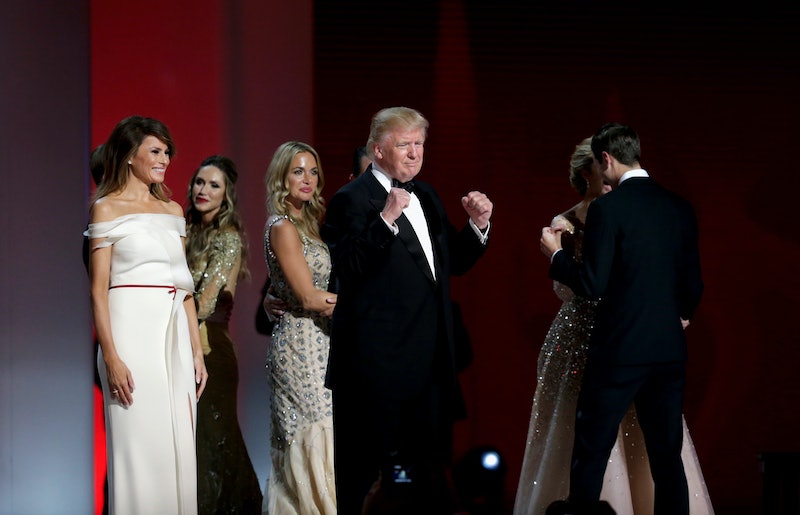 While Americans are gathered in living rooms and bars across the country watching Super Bowl LI, the first family is also watching the biggest game of the year. A photo of Donald and Melania Trump watching the Super Bowl at the Trump International Golf Course began circulating on Twitter. In the photo, the first couple is joined by Reince Pribus, his chief of staff, and his family.

In the photos, the president is wearing a suit and seated next to the first lady, who is in a periwinkle dress. The regal room appeared to be adorned with blue tablecloths, gold-colored chairs, and football centerpieces. The photos of the first couple watching the Super Bowl in the plush country club surroundings earned more than a few snarky comments on Twitter.

Eric Boehlert of Media Matters, a left-leaning media watchdog group, tweeted a photo from the Trump International Golf Course Super Bowl party with the comment "trademark GOP diversity." Ronan Farrow tweeted a series of close-up shots of Melania Trump's face, saying "When you're just there for the halftime show."

It's no secret that Trump has a closer tie to the Patriots than the Falcons. Trump is reportedly friends with Tom Brady, the team's star quarter back, Bill Belichick, the team's coach, and Robert Kraft, the team's owner. However, at his Super Bowl Celebration, Trump reportedly declined to answer a question about which team he was rooting for.

While he was watching the game, many people took to Twitter to make snarky jokes about Trump's prediction. One user referenced Kellyanne Conway's "alternative facts" gaffe, joking: "Alternative Facts alert: Donald Trump just said he picked Atlanta by 21 to win the Super Bowl (and not the Patriots by 8)."

Others relied on making jokes about Trump's relationship with Brady.

Although many were happy to see Trump and his family partaking in the annual American tradition of watching the Super Bowl, some criticized the luxurious location and setup. A reporter for The Guardian noted the difference in Obama's first Super Bowl party as president compared to Trump's.

Another called out the contradiction between Trump being a president "of the people" and the velvet ropes surrounding him and his family at the celebration.

Only time will tell how Trump's Patriots victory prediction turns out, but in the meantime he'll be celebrating like the rest of the 110 million people watching.