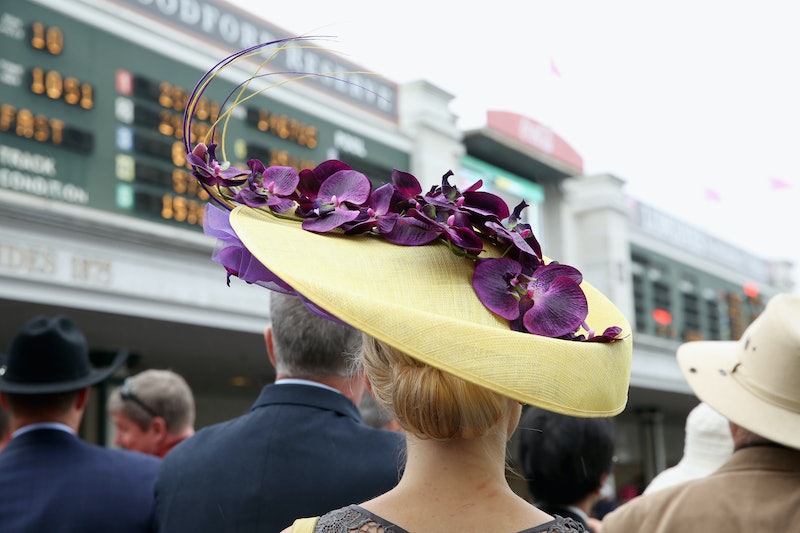 If you want a hat from Louisville, Kentucky-based milliner Jenny Pfanenstiel, you must abide by one rule: do not ask her to glue tiny plastic horses to it. Actually, Pfanenstiel has a handful of rules for potential customers, including not asking her to make copies of anyone else's hats. Pfanenstiel is a serious hatmaker, one who spent years honing her technique with international study and apprenticeships; the hats she sells at her store, Louisville's Formé Millinery Hat Shop, are made from scratch, with the help of a 200-year-old straw-braiding machine. For her, hats are an art form, often involving vintage horsehair and French ribbon as accents; the hats themselves are hand-scultped out of straw. So seriously, don’t ask for the horses: “There's plenty of other people that do that,” Pfanenstiel tells Bustle. “I'm just not that person.”

There is only one event on earth that could lead two grown women to have a serious phone conversation about tiny plastic ponies on hats: the Kentucky Derby. At the annual horse racing event known as "the most exciting two minutes in sports," outlandish hats have become about as big a draw as the actual race. While some viewers wait feverishly for the race's winner, others are just as excited for the annual flood of post-race articles with titles like “10 Most Utterly Unbelievable Kentucky Derby Hats, By Which I Mean, I Genuinely Can't Believe What I'm Seeing Here, Like, Is That An Entire Bird Glued To That Hat?" At the Derby, hatwear is basically its own competitive sport. "You see everything at the derby, that's for sure," says Pfanenstiel.

But while watching fast horses while wearing a three-foot wide neon pink straw hat is an American tradition, it hasn't always been that way. Kentucky Derby hats have continually evolved throughout the race's history, and in the hands of millennial customers, continue to change.

The first Kentucky Derby occurred in 1875, and it did not involve the Derby hat as we know it today — you know, one that's enormous, brightly colored, and possibly perched atop Kim Kardhasian. Rather, female attendees wore the kind of hat one might wear to regular, Kim K.-free picnic.

Colonel Meriwether Lewis Clark, originator of the Kentucky Derby, used hat-wearing women in his marketing in order to telegraph that the Derby was a refined event. At the time, horseracing was generally seen as a sordid activity that lone men engaged in privately; wearing hats, meanwhile, telegraphed something a bit more high-brow. Clark sent a small army of wealthy, hat-wearing women to tell their friends about the first Derby, to convey that this race was a chic, family-friendly, event, not a place for single men to engage in horse-based vices. As Courtney Stinson, public relations manager for the Kentucky Derby Museum, told USA Today in 2005, "We don't have a lot of documented history on the hats, but speculation has it that when the Derby was first brought here, they wanted it to be a social affair.”

Derby hats didn't mutate into our modern-day attention-grabbers until the 1960s, when increased televised coverage of the Derby encouraged female attendees to use their hats to stand out (and, presumably, be recognized by their friends who couldn't make it to the race and had to chug their mint juleps at home). “The hats became larger, more avant-garde,” Wendy Treinen, a spokeswoman from the Kentucky Derby Museum, told NBC in 2016. "Formalities dropped away, the hats had more prints, they were brighter.” And while styles have evolved, the larger-than-life Derby hat has remained a race staple.

But there are Derby hats and there are Derby hats. My experience with Kentucky Derby hats, perhaps like yours, begins and ends with attending a local Derby party while wearing a cheap organza fascinator — you know, those big headbands that have a variety of fun little ornaments sprouting out of the top. But around the country — and especially in Louisville — high-end Derby hats are their own high stakes industry. Truly elaborate Kentucky Derby hats can take a year to design and cost upwards of $1,000, built by highly trained milliners who might spend weeks getting to know a customer and developing a sense of their personal style. Figuring out their Kentucky Derby styling is "like planning a wedding," for some people, says Pfanenstiel, a one-time costume designer for clients like the Joffrey Ballet and Margaret Cho. Eden Bridgeman, co-host of the Derby's Trifecta Gala and lifelong Derby attendee, tells Bustle that she and her milliner, Chicago-based Loreta Corsetti, generally spend about a year developing each hat from an initial idea or image (her hat last year, seen below, was inspired by the crown Angela Bassett's Queen Ramonda wore in Black Panther ). "It's hat first, and then the outfit is secondary to complement," Bridgeman tells Bustle.

This is where millennials come in. Sort of. Unlike the wide variety of American traditions we're accused of killing — from home ownership to mayo! — millennial Derby attendees have embraced the Derby hat. Louisville native Bridgeman says that “trying to continue that tradition of hats with the Kentucky Derby" is a huge factor in the decision to wear them. “When we all attend the Kentucky Derby, that you're going to have myself and my sister-in-laws in hats that my mother and other women of an older generation will still want to wear, and vice versa."

Weekend TODAY weather anchor and 3rd hour of TODAY co-host Dylan Dreyer concurs: “Everybody still goes all in with the hats.,” Dreyer tells Bustle. “So many things now have been made to be more casual. [But] At the Kentucky Derby, that tradition is strong.”

But, says Dreyer, it’s not just about taking part in tradition. The milliner who makes the four(!) hats Dreyer wears on-air each year while covering the Derby and sister race the Kentucky Oaks makes Dreyer "feel beautiful." "It’s very rare that you can dress up like that," she says, "and not feel like you're sticking out like a sore thumb.” (And yes, if you're wondering, she and her husband have used one of Dreyer's Derby hats to re-enact the scene from Titanic where Kate Winslet looks up from under her enormous hat).

Despite all the talk about tradition, millennials do sometimes do their gigantic hats a bit differently than their parents. Namely: fascinators! Older customers, says Pfanenstiel, generally pick out hats based on what they remember their mothers or grandmothers wearing. But all the Derby experts I spoke with agreed that the 2011 Royal Wedding was a huge influence steering younger customers towards fascinators; previously not so popular as Derby headwear, they're now ubiquitous.

But millennials don't just wear fascinators because we all want to look like Princess Beatrice wearing... whatever that giant tan thing she wore to the Royal Wedding was. Millennials are also often more likely to prioritize comfort. "When you're wearing a big brim, it might look good that morning, but when you're in a big crowd, you might be bumping into people... and it's difficult to talk to others," says Pfanenstiel. Fascinators take up less space, put less stress on the neck, and are less likely to poke someone in the eye.

Oh, yeah, did you not know that eye pokes are a huge hazard of Derby hat life? "Happens all the time," says Pfanenstiel. "You feel like nothing else exists" when you're under your hat, says Dreyer. "You are in your own little bubble because you can't see around your hat half the time." Hence, the hat pokes. "I don't think I've ever actually injured someone," Dreyer says. "[But] at some point, you kind of lose all sense of your circumference. Sometimes you don't really realize how big your hat is."

So if you go to a Derby party on Saturday, thank a millennial for that lightweight fascinator you're wearing — and if you see a hat with little plastic ponies glued to it, know that Jenny Pfanenstiel had nothing to do with it.

More like this
17 Genius Things You Can Do With Old Clothes That You Can't Donate
By Brittany Bennett and Dominique Norman
Meghan Markle’s Favourite Skincare Brand Has Finally Landed In The UK
By Tomi Otekunrin
How To Master Baby Braids, According To TikTok
By Tomi Otekunrin
What Is “Jello Skin”? The Latest Viral Trend To Know About
By Tomi Otekunrin
Get Even More From Bustle — Sign Up For The Newsletter