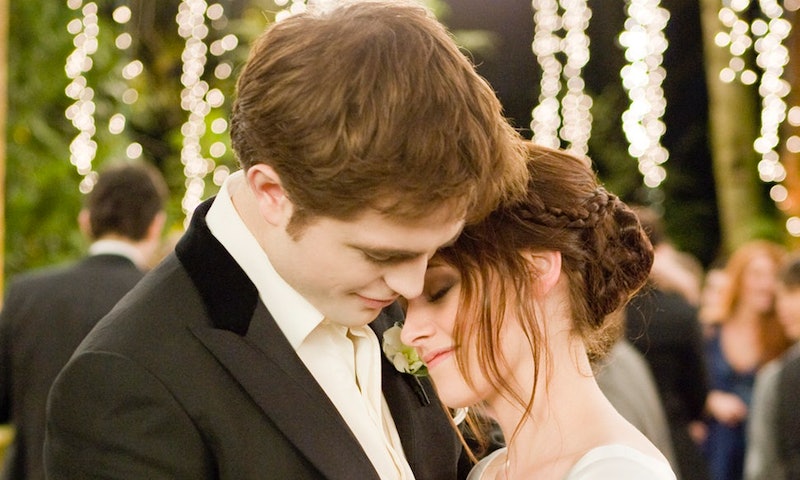 A lot of these hot takes are silly, and steeped in blind Twilight-hate. But they're right in one sense: Vampires are, definitively, the sexiest monsters around. Many women (and men and people who don't identify with either) have vampire fantasies. Literature and film and TV and ASMR YouTube channels are full of vampire romance stories. So why? If it's not that 100% of women want to be attacked by elderly bad boys, then how did vampires become the most bang-able monster in history?

As with all sexy literary movements, Lord Byron is to blame.

At least, he was part of it. But the original European vampire myth wasn't especially sexy, or even especially unique — many cultures have some sort of monster that feeds on blood or human life force.

In Europe of the Middle Ages, vampires were said to be bloated, shrouded corpses who rose from the dead to suck blood and cause strange diseases — probably because recently deceased bodies often bloat as they decompose, and intestinal decomposition can force blood into the mouth, making it look like a dead person has a mouthful of fresh blood. Sexy!

Monsters, of course, always represent our fears and social anxieties, and with early vampires, these fears seem fairly clear cut: Death and disease are scary, corpses get weird as they decompose, and your blood is supposed to stay inside your body, not outside. Better eat lots of garlic, just in case.

But then, during the rainy summer of 1816, a bunch of rich, goth British kids went on vacation together to Lake Geneva. Lord Byron, a poet and all-around sexy jerk, suggested that everyone come up with ghost stories to pass the time while stuck inside. A teenaged Mary Shelley came up with Frankenstein. Lord Byron started writing a story about a vampire, but gave up pretty quickly. His personal physician, a young man named John William Polidori, mostly just sat and listened.

A few years later, in 1819, Polidori wrote a short piece of fiction called "The Vampyre." In what is either a declaration of love or the biggest drag of all time, he based his titular vampire on his old boss, Lord Byron. Suddenly, this vampire was not a gas-filled corpse oozing with blood. He was Byron: sexy, rich, pale, poetic, mysterious, very extra, and kind of mean. In the story, the vampiric Lord Ruthven sweeps women off their feet and then murders them by draining all their blood. The fears he represents seem to be less about mysterious village illnesses, and more about unrestrained lust and the fear that your charming lover will turn out to be a monster behind closed doors. (Look, I'm not saying that Polidori got dumped by Byron and then invented the modern vampire out of revenge, but I'm also not not saying that.)

Polidori's story was so popular that it changed the way that people thought of vampires. And in 1872, author Joseph Sheridan LeFanu wrote another Gothic novella about a vampire: Carmilla.

This time, the vampire is a lady. And rather than seducing men and draining them of blood, the titular Carmilla goes after other ladies. She appears to them at night, sometimes in the form of a giant cat. She bites them in suggestive places, and causes them to have "strange symptoms." Clearly, Carmilla is not just the fear of uncontrolled lust, but the fear of female lust. Specifically, lesbian female lust, which was evidently terrifying to Victorian men.

And then, of course, we have Dracula, from Bram Stoker's 1897 novel Dracula. He is, essentially, a glorious mash up of everything that vampires had become by the end of the 1800's: he's rich and charming. He is attended by sexually charged lady vampires (the horror!). He is lustful and prone to ravaging. He is also an Eastern European attempting to move to England, and bringing with him all of his scary foreign germs, just to tack on one more irrational Victorian fear.

With Dracula, the image of the European vampire was set in stone. The whole "bloodsucking" had shifted from a literal fear of bleeding sores to a metaphorical fear of aristocratic leeching and sexual conquest. This is still our gaunt, wealthy image of a classic vampire archetype.

So... why do we think vampires are sexy today?

I mean, yes, they are taboo-breaking "bad boys," and they do tend to represent unbridled lust and/or socially "unconventional" desires, and all of those things are deeply sexy to some people. But also, once we hit the middle of the 20th Century, women started writing about vampires. Specifically, women started subverting the classic vampire tropes.

After over half a century of Dracula and Dracula-knock offs ruling the vampire scene with a delicate sneer, Marilyn Ross started writing the Barnabas Collins books, based on the TV show "Dark Shadows." Then, in the 1970s, Anne Rice started on her Vampire Chronicles and Chelsea Quinn Yarbro wrote the Saint-Germain books. These vampires can still be cruel and aristocratic and lustful. But they are closer to poetic, tragic heroes than villains. They are no longer Lord Byron, they are who Byron thought he was.

Most importantly, they are restrained. They wrestle to control their impulse to hurt people. Sometimes they fail, but sometimes they succeed. Sometimes, they share their incredible wealth and privilege and power with their lovers of various genders. Sometimes they aren't all that wealthy, and have to lobby for vampire rights. And they are followed by softboy vampires like Edward Cullen (for all his flaws), and Sookie Stackhouse's gentile vampire lovers, and legion upon legion of teen vampire boyfriends who only bite with permission.

The modern vampire fantasy is, at its core, a simple one: The vampire has the power to hurt you, but they choose not to. They are able to overcome their instinct to bite with abandon. They get all moody and feel genuinely bad about the hurt they've caused to people in the past. They want you to join their freaky sex dungeon full of vintage French daybeds and blood soaked cravats and unrestrained female desire, but only if you're feeling it, too.

In short, I am not baffled that women like vampires. Our modern literary vampires fill a niche that far too many women have a need for: A monster who doesn't really want to hurt you at all.