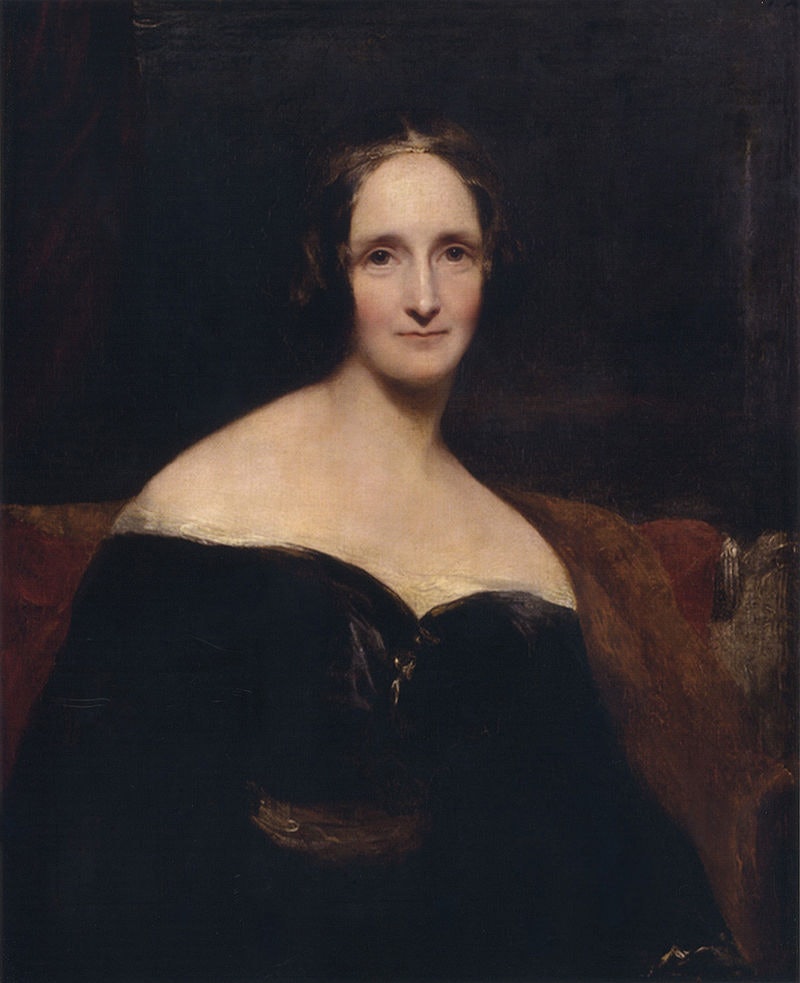 As dystopia novels become (horrifyingly) relevant once more, and Hollywood keeps churning out their shiny blockbuster space adventures, let's all take a moment to remember that the science fiction genre was invented by a teenage girl. Enough with these fake geek boys claiming that Isaac Asimov was the father of sci-fi. Men have made some notable contributions to the genre, sure, but modern science fiction started with a teenage feminist who was trying to one-up her boyfriend's annoying friends.

Now, of course, defining the genre of science fiction can get a little messy. There's the general definition of sci-fi as "fiction based on imagined future scientific or technological advances and major social or environmental changes." Fair enough. But what about sci-fi books that are set in the past? What about Star Wars, which is set long ago and far, far away and contains almost no actual science? Even this vaguest of definitions doesn't quite cover it. But then again... if sci-fi is just any story that contains weird nonsense, then does Tolkien fall under science fiction? What about Greek Mythology? Or rom-coms, which don't seem to follow any earthly logic? Help.

If there is any definitive starting point for the modern genre of science fiction, though, it is most certainly Mary Shelley's Frankenstein.‌

Mary Wollstonecraft Godwin was born in 1797, the daughter of the pioneering feminist writer Mary Wollstonecraft (yes, she was named after her mother, Gilmore Girls style). The elder Mary died when baby Mary was only a month old, however, so little Mary was raised by her anarchist father, William Godwin.

When she was sixteen, Mary fell for a tall, dramatic fan of her parents' writing named Percy Bysshe Shelley (Percy was already married at the time, but he got over it). They would go on long walks in the graveyard where Mary's mother was buried like the hardcore goth kids they were. After a couple of weeks they declared their undying love for each other. Mary's dad forbade them from dating, because even anarchists have their limits. But after Percy threatened suicide, Mary ran away with him to France. They left Percy's pregnant wife behind.

At age seventeen, Mary gave birth to and lost her first child. Soon after, she started recording the strange dreams she had about her deceased baby coming back to life.

Not so long after this tragedy, Mary and Percy were dragged off to Switzerland to hang with Mary's stepsister's kind-of boyfriend, the poet Lord Byron.

They spent the rainy summer in Switzerland staying up late, talking about life and art and weird science, until one gloomy night when Byron proposed a challenge: everyone had to write a ghost story. ‌

Percy and Byron came up with their stories quickly, but Mary was stumped. The boys kept bugging her about it, asking "Have you thought of a story?" first thing every morning, until the night that an anxious Mary had a weird, waking dream:

I saw the pale student of unhallowed arts kneeling beside the thing he had put together. I saw the hideous phantasm of a man stretched out, and then, on the working of some powerful engine, show signs of life, and stir with an uneasy, half vital motion.

Mary wrote down her vision, which eventually become the novel Frankenstein: or, The Modern Prometheus. ‌

Frankenstein, published in 1818, was just as much a Gothic horror story as a sci-fi novel. (Mary Shelley and Byron were so goth that they fought over Percy Shelley's preserved heart when he died — Mary won, but she let Byron keep Percy's skull.)

But despite its monster story tropes, Frankenstein was the first speculative novel of its kind. It looked into the possible future of modern science, and considered what that could mean for humanity. Mary Shelley also authored The Last Man, a post-apocalyptic novel that kicked off the whole "last man standing" genre of sci-fi, too. Jules Verne and H.G. Wells didn't start writing their stories about martians and whatnot until the 1860s.

And even if you want to make the case that science fiction started before Shelley, with the very first novel about traveling through a portal to another dimension full of submarines and bird men, then you're probably looking for The Blazing World, written in 1666 by Margaret Cavendish... also a women.

Or, if you want to go back even further to the very first novel ever written, then you're looking for The Tale of Genji, published around 1008 by Murasaki Shikibu, who was also (you guessed it) a woman.

Women have been behind game-changing science fiction since the beginning. It makes sense, after all, that marginalized writers of every sort would find a home in imagining a better tomorrow. As writer Jane Espenson says, "If we can't write diversity into sci-fi, then what's the point? You don't create new worlds to give them all the same limits of the old ones.”

But in a time when women, free speech and science are all under attack, let's keep reminding everyone that science fiction has always been a space for women's voices.

And a big shout out to Mary, for her creepy zombie baby dream that launched a thousand space ships.