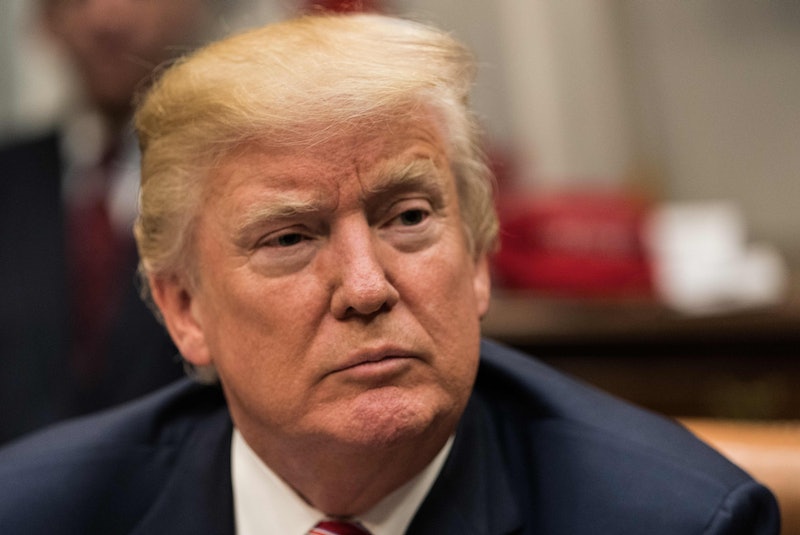 On Tuesday evening, Preisdent Donald Trump responded to an attack in New York City, during which a man drove a truck down a busy bike path, killing at least eight people. The incident is being labeled a terrorist attack by the city of New York, according to Police Commissioner James O'Neill, because it's similar in nature to other terror attacks, he explained during a press conference, and because of a statement the driver of the truck reportedly yelled at the scene.

"Based on information we have at this moment, this was an act of terror," New York Mayor Bill de Blasio said of the attack, "and a particularly cowardly act of terror aimed at innocent civilians."

While the ethnicity of the driver hasn't been revealed, it's been widely reported that he shouted an Arabic phrase. This might have prompted our president to tweet, just 90 minutes after the Manhattan attack:

This is a wildly different response than he had to the Las Vegas massacre, during which Stephen Paddock, a white man, claimed the lives of more than 58 people and injured more than 500. Trump waited nearly five hours after the mass shooting to respond:

My warmest condolences and sympathies to the victims and families of the terrible Las Vegas shooting. God bless you!

It looks like Trump may be using this attack as an opportunity to push his travel ban, which would prohibit anyone from several Muslim-majority countries from entering the United States.

"We must not allow ISIS to return, or enter, our country after defeating them in the Middle East and elsewhere," he tweeted after the NYC attack. "Enough!"

Trump seems to be convinced that keeping Muslim people out of the country will help lower the number of terrorist attacks in the United States, despite there being no evidence to support this belief. According to an analysis by The Washington Post, of the 10 major attacks related to Islamist extremism in America since the attacks on September 11, 2001, none of the assailants came from the six countries Trump targeted with his initial travel ban proposals.

While few details are known about the shooter involved in the NYC attack on Tuesday, Trump was quick to associate him with ISIS. He was also quick to blame the Pulse nightclub massacre in Orlando, Florida, in 2016 on islamic extremism, despite the fact that the shooter, Omar Mateen, was born just a few miles away from where Trump grew up in Queens, New York. "The killer was born an Afghan," he said during a speech on terrorism at the time; however, he didn't mention that Mateen was actually born in the United States.

Trump suggested in a tweet following the Pulse shooting that his travel ban could have prevented the tragedy. "Appreciate the congrats for being right on radical Islamic terrorism," he wrote. "I don't want congrats, I want toughness & vigilance. We must be smart!"

While Trump has since released a statement — "Our thoughts and prayers are with the victims of today's terrorist attack in New York City and their families" — it's clearly not uncommon for him to use shootings like this, at the hands of people who are not white, as a way to push his anti-Muslim rhetoric. As ThinkProgress points out, he has a pattern of responding swiftly to attacks that involve Muslim assailants of color.

After the 2015 mass shooting at a San Bernadino, California, office complex, Trump used the shooters' religion to rationalize the massacre. Earlier this year, in August, when a van hit pedestrians in Barcelona, Spain, killing 14 people, the president seemed sympathetic, before he found out the driver was Moroccan. He then perpetuated an Islamophobic myth about General John Joseph Pershing killing Muslims with bullets soaked in pig's blood in the Philippines.

The Trump administration refuses to discuss gun control after a mass shooting because it's not the right time, yet they seem to have no problem immediately jumping into a discourse about Islamic extremism, even though very little information has been released about the perpetrator of the NYC bike path attack.