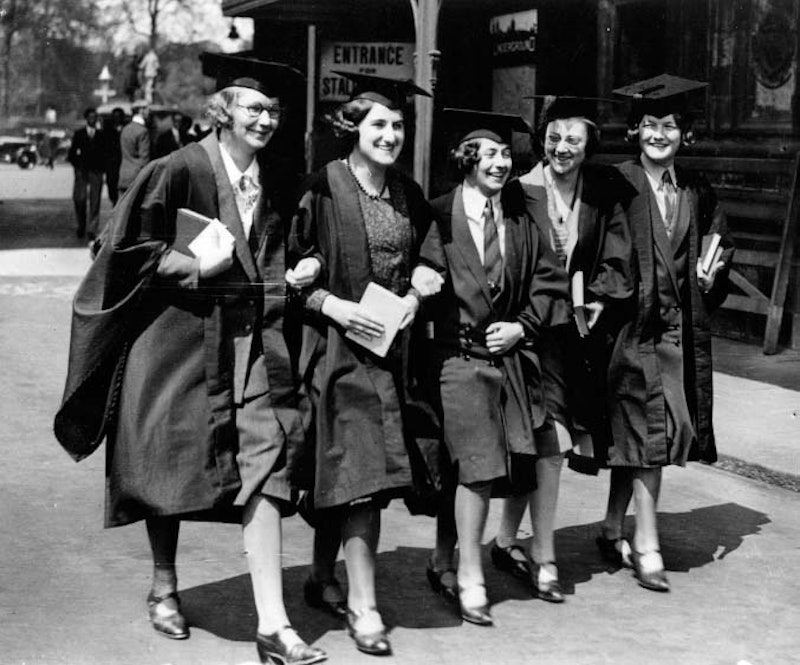 We're currently in the thick of college graduation season, which means that you and your friends are likely gathering your gowns, planning your parties, and wondering what the hell you're going to do with your lives once you've got that shiny new diploma. But women's higher education, and the specific right to earn a degree of the same quality and content as a man at a university, is in many senses a very new right; and to understand just how far we've come, it's necessary to look back a long way to the pioneers and kick-ass women who made this educational revolution.

Women's pursuit of an equal, in-depth, high-level education as adults has met many stumbling blocks over the centuries: inferior standards (or the complete absence) of education for young girls, beliefs in women's intellectual inferiority, and worries that education in non-domestic subjects wouldn't adequately prepare women for their "natural" role as wives and mothers. To the women of a century ago, the fact that 11.7 million women started college in America in 2016 — a majority of the total number of new students — would seem like a miracle. The ability to get your degrees as a woman isn't something to be taken for granted, so let's have a look at the history of women who just wanted to have the same education as everybody else — and the incredible fight it took to get them there.

More like this
Black Women's Equal Pay Day Highlights An Upsetting Problem
By Brandi Neal
Women Around The World Are Cutting Their Hair In Solidarity With Mahsa Amini
By Darshita Goyal
20 Smart Devices Under $35 That’ll Change The Entire Vibe Of Your Home
By Emma Carey
Here’s Your Daily Horoscope For September 26, 2022
By Mecca Woods
Get Even More From Bustle — Sign Up For The Newsletter