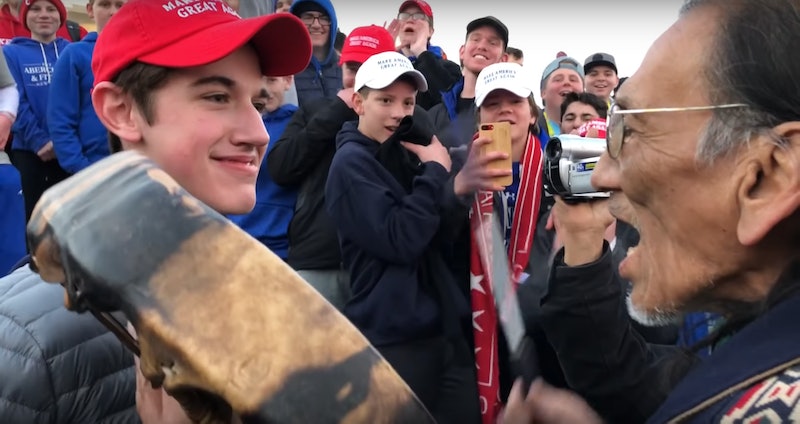 There are many sides to every story. After a video of MAGA-hat wearing teens surrounding a Native American protestor went viral over the weekend, one of the Covington Catholic High School students in question spoke out, arguing against the claims that he and his classmates harassed the Native American protestors. Nick Sandmann's statement on the viral video of him and Nathan Phillips tells a completely different side of the story that so many people condemned over the weekend.

The viral video came from the Indigenous Peoples March, which took place on the same day as the March for Life — the event the Kentucky High School students attended in Washington D.C. In the video, it appears as though the students had surrounded Omaha nation elder Nathan Phillips, as Phillips continued to chant and play his drum. Phillips later joined the chorus denouncing the students. Bustle has reached out to Covington Catholic High School for comment.

"I heard them saying, 'Build that wall, build that wall,'" Phillips said in a video posted to Instagram. "You know, this is indigenous lands. We’re not supposed to have walls here — we never did for millennia, before anybody else came here."

In a statement sent to CNN, however, Sandmann claimed that the viral video didn't accurately show what happened.

"I am providing this factual account of what happened on Friday afternoon at the Lincoln Memorial to correct misinformation and outright lies being spread about my family and me," Sandmann wrote at the beginning of a statement published on Monday. "I am the student in the video who was confronted by the Native American protestor."

In his statement, Sandmann contradicted the previous claims that the group had been chanting Trump slogans. Instead, Sandmann wrote that the students were merely chanting school spirit cheers in reaction to slurs directed towards them from a group of "four African American protestors," who, it turns out, were part of a fringe religious group, the Black Hebrew Israelites.

"At no time did I hear any student chant anything other than the school spirit chants. I did not witness or hear any students chant 'build that wall' or anything hateful or racist at any time," Sandmann wrote. "Assertions to the contrary are simply false."

Sandmann's statement then described Phillips approaching him while playing the drum.

"I did not make any hand gestures or other aggressive moves," Sandmann wrote. "To be honest, I was startled and confused as to why he had approached me."

Sandmann closed the statement by reaffirming his faith and defending himself, his classmates, and his school as a whole against allegations of racist actions.

"I can only speak for myself and what I observed and felt at the time," Sandmann wrote. "But I would caution everyone passing judgement based on a few seconds of video to watch the longer video clips that are on the internet, as they show a much different story than is being portrayed by people with agendas."