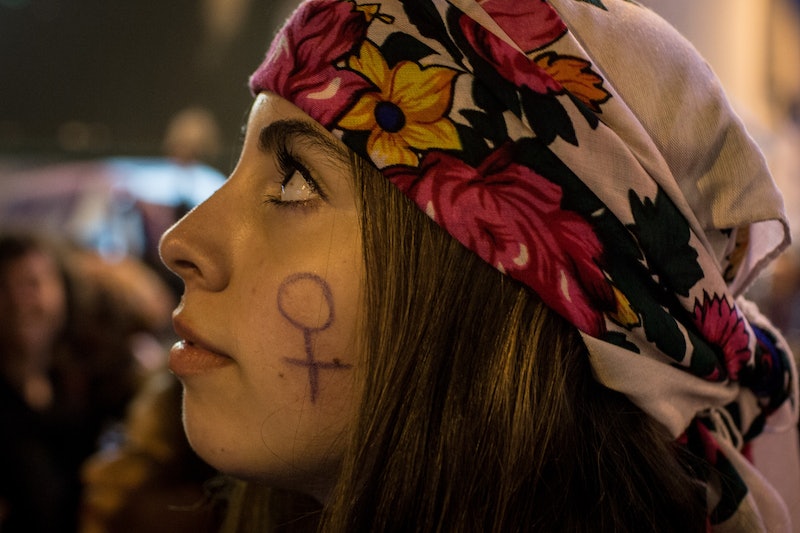 On Wednesday, the world observed International Women's Day in a myriad of ways, focusing on countless different issues facing half the human population. Thousands of women in the U.S. participated in the Day Without a Woman strike to send a message to the Trump administration on the economic importance of women in the workforce; over 10,000 people marched for women's rights in Istanbul; in Poland, roughly 17,000 protestors marched around the country's capital objecting to the government's strict anti-abortion laws; in Argentina, massive crowds gathered to demand an end to violence against women, chanting "Ni Una Menos" — "not one less;" Iceland became the first country to legally require equal pay for equal work. While such issues tend to be brushed to the side by those unaffected, it has become abundantly clear that granting women rights leads to the success of society as a whole and that continuing to deny women opportunities is detrimental to all.

“There is already enough evidence in the world to show the positive impact of women’s leadership,” said Phumzile Mlambo-Ngcuka, executive director of UN Women, at a Women In Power conference in late February. “Women have successfully built and run countries and cities, economies and formidable institutions.”

The economic benefits of gender equality is perhaps one of the easiest assets to see. According to a 2013 report by the International Monetary Fund, the global economy would experience as significant boost with the increased participation of women in the workforce.

GDP per capita losses attributable to gender gaps in the labor market have been estimated at up to 27 percent in certain regions (Cuberes and Teignier, 2012). Aguirre and others (2012) suggest that raising the female labor force participation rate (FLFPR) to country-specific male levels would, for instance, raise GDP in the United States by 5 percent, in Japan by 9 percent, in the United Arab Emirates by 12 percent, and in Egypt by 34 percent. Based on International Labour Organization (ILO) data, Aguirre and others (2012) estimate that of the 865 million women worldwide who have the potential to contribute more fully to their national economies, 812 million live in emerging and developing nations. — International Monetary Fund

A report by the International Finance Corporation also highlights the business boost companies enjoy after implementing measures to ensure gender equality in their policies and focusing on the recruitment of female employees.

Companies find that regulatory compliance on gender equality results in unexpected business benefits and, similarly, companies that decide to move above and beyond regulatory obligations by investing in good working conditions often find that it benefits their bottom line. High levels of economic growth in emerging markets mean that, more than ever, firms operating in these markets are expanding and constantly looking to sharpen their competitive edge and recruit the best talent. Against the backdrop of global increases in women’s education levels, employers can no longer afford to ignore women workers. Companies that do not integrate women’s employment into their business strategy risk a series of missed opportunities. — International Finance Corporation

Aside from monetary gains, the participation of women in the worlds of politics, government, academia, art, and science has been proven time and time again. Women leaders have been proven to have more empathy and to be more willing to negotiate than men in politics — a circumstance which undoubtedly originates from the way both sexes are typically socialized to approach emotions. Women leaders also tend to fight for the progress of other women and for the welfare of children.

Since men and women experience the world differently, women's input has resulted in solutions to problems that would otherwise have likely gone unaddressed with only the male perspective guiding the process. In developing countries, policies focusing on climate change have been impacted by the participation of women in the discussions. Solutions like clean solar cookstoves — which are primarily used by women — have manifested as a result. Groups like Solar Sister now focus on providing women in poverty-stricken areas with clean energy appliances necessary for everyday life.

In a social sense, dismantling gender roles than suppress women's ability to advance or live freely would be beneficial to both men and women. While the pressures men face don't come with institutional barriers designed to keep them from reaching their full potentials, the concept of masculinity is just a long set of rules dictating how men should behave, what interests they should have, and how they should think and feel.

At this point, it's pretty hard to deny the overall societal success the world would see with gender equality.