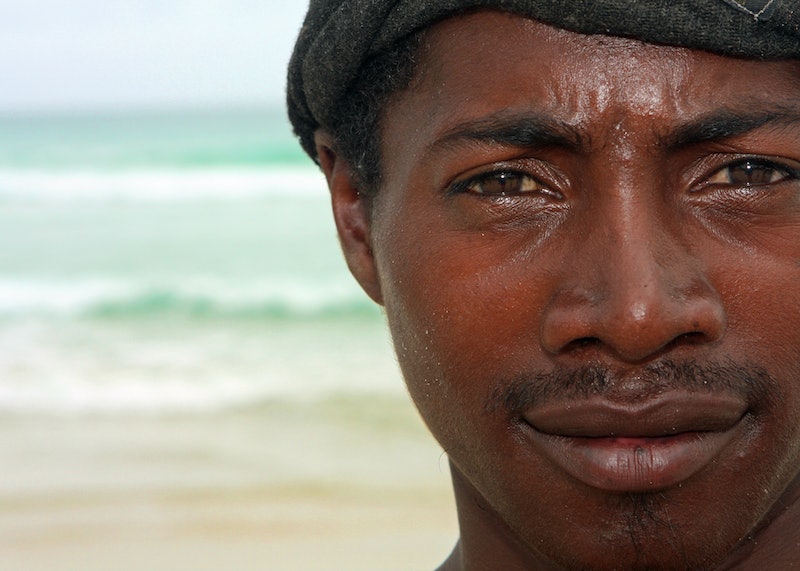 Women are the face of feminism, and understandably so; after all, we're the originators, advocates, and defendants of the equal rights movement. When we focus solely on how feminism benefits women, however, we leave out a hugely important part of the conversation — namely, ways the patriarchy affects men. Since the birth of the modern feminist movement in the early twentieth century, there has been considerable discussion of whether men can be feminists, and the answer often depends on your definition of feminism. Noted feminist and philosopher Simone de Beauvior, for instance, argued in The Second Sex that (cisgender) men cannot be feminists due to inherent differences between genders. Even today, some argue that men are only capable of being allies rather than feminists, either out of an inability to truly empathize or a distrust for their intentions. As Kat Stoeffel explained in The Cut last year, "There’s something suspicious about anyone eager to identify with the oppressed."

However, contemporary feminism as a whole seems to be moving toward the consensus that yes, men can be feminists — and they should, because the patriarchy affects their lives as well as women's, if not to the same extent. Of course, the majority of the ways the patriarchy affects men are beneficial, from the lack of laws policing their bodies to their setting as the "default" gender. On the other hand, there are plenty of ways that the patriarchy actually hurts men, many of which are hiding in plain sight. To find them, all you have to do is look.

As impossible and damaging as societal standards for women are, the standards for men are just as poisonous: From birth, men are discouraged from showing emotion, which is seen as a feminine attribute — boys don't cry, right? Without a culturally-approved outlet for their feelings, this stifling of emotion has led generations of men to turn to unhealthy coping mechanisms such as alcohol abuse, which men are more likely to experience than women. Furthermore, research has shown that fear of being seen as "weak" is so deeply ingrained that they drastically overcompensate when they feel threatened. Male overcompensation is typically played for laughs, but in reality, it can have terrible consequences. As the authors of the study point out, men who don't see themselves as masculine are more likely to harass and act aggressively toward women and gay men.

Although statistics show that men make up anywhere from 10 to 38 percent of sexual assault victims, sexual assault is often seen as something that happens to women, by men. Even when people do admit that male rape occurs, it's often played for laughs: Prison rape jokes, congratulating him on getting "laid," etc. The minimization and outright dismissal of male sexual assault doesn't exactly encourage men to come forward after an incident, and it can seriously impede recovery.

While women are slut-shamed at every opportunity, men are encouraged to bang everyone in sight, often whether that person is consenting or not. In fact, if men don't express voracious sexual appetites at all times, they're belittled for not being "manly" enough. The stereotype of male sexual aggressors is so entrenched that for decades, scientific research worked on the assumption that men are more sexual beings than women, and it's only recently that this narrative has come into question.

Similarly to sexual assault, domestic violence is assumed to be a female concern. While women do make up the majority of domestic violence victims, domestic abuse can and does happen to men as well. However, the culture of toxic masculinity is so strong that some men may not even realize they're being abused, because they aren't used to violence being discussed in terms of female-on-male.

Women are seen as the natural caretakers in a household (ugh), and as a result, men are discouraged from spending too much time with their children. Even today, stay-at-home dads are seen as weak for "letting" their wives be the breadwinners. In fact, research has shown that men whose wives take home the primary income are more likely to be dissatisfied with their lives, all thanks to a culture that sees childcare as a feminine activity.

There's no denying that the patriarchy is set up to benefit men. However, gender norms are just as rigid for men as they are for women, and the consequences can be deadly. Some have argued that the high rate of completed suicide for men could be traced to the cult of masculinity, which causes men to be less likely to seek help for emotional problems. As much as men may benefit from patriarchal societies on the surface, it's clear that the disadvantages far outweigh the advantages.

Fortunately, there's a movement dedicated to dismantling the patriarchy: Feminism. Fancy that! We still have a long way to go, but if we work together, perhaps we'll find ourselves in a society that doesn't discourage men from showing emotion or shame women for doing so.