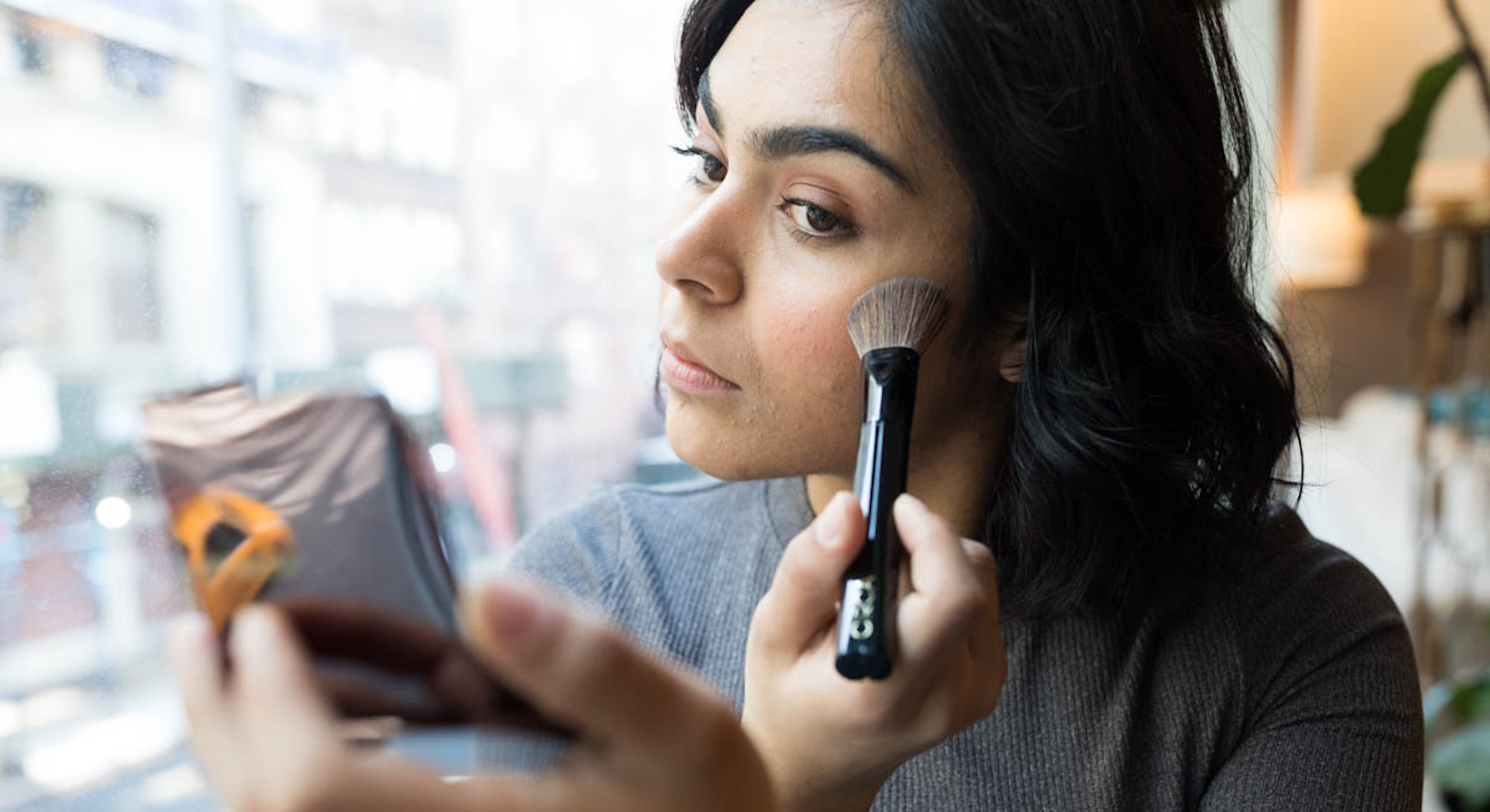 "She just looks so...fake," I said to one of my friends, referring to whichever celebrity we were dissecting that day. We were in high school, a phase of life when everything got harshly categorized on either side of an unforgiving binary: Ugly or hot, awesome or stupid, disgustingly fake or effortlessly pretty.

Looking "fake," at least the way I saw it then, meant multiple layers of makeup, slathering on excessive bronzer, or wearing that push-up bra that made your boobs look huge when they really weren't. Of course, 2002 Me liked the result of doing all those things — I just didn't like it when it was undeniably clear that women were doing it.

As I've aged, I've realized that the line between "fake" and "natural" is brutally dynamic, an eternally spasming needle on the barometer by which we measure how hard a woman is trying. If she's trying too hard, she's fake. If she's not trying at all, she's lazy. If she's trying but she doesn't look like she's trying, she's achieved the apparent goal of feminine existence: The ability to trick people into thinking she didn't try to be beautiful, but walked out the door that way anyway.

Of course, the idea that women are doing too little or too much is nothing new. These are the expectations created by societal beauty standards that have existed and evolved over the course of centuries, many of which are dictated by patriarchal, male-driven notions of How A Woman Should Be. Some of these directives are uglier than others — no pun intended.

"I think women have always felt that pressure, to conform to what is considered attractive in their time," Gabriela Hernandez, author of Classic Beauty: The History of Makeup, and founder of Besame Cosmetics, tells Bustle. "It really all [stemmed from] being able to attract a mate and make a family, and being chosen by a mate to do that has been the impetus for female beauty."

"In the Victorian era, one of my favorite eras to research, I found so many toxic practices that were considered the norm," says lecturer, writer, and professor of The Cult of Fashion and Art of Scent at the Pratt Institute Alexis Karl. "Continuing the trend from the Renaissance, Victorian women would drop deadly Belladonna in their eyes to dilate the pupils and give the desired dewy look. This would often cause blurry vision, and possible permanent blindness if administered in larger doses."

Historically, adherence to beauty standards was as much about class and race as it was about sexual attractiveness. The trend of whitening or lightening skin, for example, was pervasive across centuries and cultures, always with the goal of making a woman look not just wealthy, but delicate and chaste.

"Women have chased white skin since the Hellenistic period of ancient Greece, where lead white makeup was employed to cover the natural skin color and perfect the surface," Karl explains. "Once again, the Victorians borrowed this practice, painting the skin with lead based enamel white [face paint], which is as corrosive as it is perfecting. [In the] 1800s, when a woman would decide to be painted or natural," Karl says, "Often...natural would be as dangerous as artifice. Lead white [paint] would be replaced by arsenic wafers, nibbled on for translucent skin, or ammonia washes and poisonous eyedrops."

It's not just beauty, either. Fashion comes with its own impossible-to-balance scale of judgments and expectations, and using clothing (think corsetry, bras, certain patterns, etc.) to "fake" an aspect of your appearance is just as pervasive.

"Although there are more options for the definition of fashion today than in the past, the true and original concept of fashion is about conforming to an idealized aesthetic," says Johnathan Walford, fashion historian and curatorial director of the Fashion History Museum, "Women and men have always conformed to fashion to meet acceptance in society. Societal acceptance may lead to better jobs and marriage prospects — gateways to success in life. However, fashion is a balance, and extremes of caring too much about fashion, or not enough, can be detrimental. Everyone is pressured to conform to some extent to prove sociability, community, responsibility, and decency. Stepping too high can get women and men identified as being too vulgar, vain, or eccentric, while aiming too low gets them identified as slobs, bums, or just plain crazy."

Of course, the "detrimental" extremes Walford describes refer more to the historical women's approach than how modern women (including myself and the other editors of this website) interact with the same subject. However, I can't help but notice an infinitely impossible-to-manage parallel that exists between women across generations. A woman in 2018 wears makeup for her Tinder photo, only to be soundly criticized by her date, who accuses her of "lying." Another woman in the '60s felt the pressure to agree to silicone breast implants (at the time, a very new procedure) just to be subjected to increased catcalling and inexplicable pain in the aftermath. It's easy to imagine a Victorian woman who felt the pressure to be glassy-eyed and dewy, only to have the aristocrats around her politely shake their heads in disappointment when she went blind.

These women are symbols of an entire population's struggle to strike the generally unworkable balance between the real, the fake, the fake that we want everyone to believe is real, and a society that constantly demands to know the truth. We're asked to present ourselves in our finest forms while being forced to hold the curtain shut behind us so no one sees what went in to getting there. It's the reason why "natural" beauty is routinely celebrated and overt vanity or extravagance is demonized, despite the fact that natural doesn't always mean natural at all and an ostentatious commitment to beauty ritual is nothing more than a choice — and a valid one, at that.

Generally, I like to think that things are changing, that women are less routinely judged and are free to make the choices they want to. And, don't get it twisted: Even if you personally enjoy a dewy-eyed moment, the practices of the Victorians are not encouraged. You don't have to take physical transformation to a dangerous extreme in order to be included in this new, more accepting universe of glorious fakeness. Bustle readers, for example, fake plenty of stuff without injuring themselves.

According to a recent survey of 305 millennial women, 44 percent of participating Bustle readers tweeze their eyebrows. Sixty-two percent have tried acrylic nails, 53 percent wear makeup to "enhance" their features, and 5 and 6 percent wear hair extensions and wigs, respectively. Percentages are lower for clinical procedures, with only 4 percent getting Botox, 1 percent getting fillers, and 3 percent getting plastic surgery. Perhaps what's more interesting though, are our readers' answers about the concept of "faking" your appearance — 70 percent believe societal views on faking your appearance are changing to be more accepting, and a whopping 93 percent are open with friends and family about the kinds of things they do to augment their appearances.

As someone who wants to push for more frequent celebration of being fake AF, those numbers are encouraging. With that in mind, I think it's time to start praising the people who "fake" it — that is, the people who unapologetically augment their appearances — as often as we do the folks who make it all seem effortless, or those who don't do anything to change their appearance at all. The truth of the matter is that every autonomous choice a person makes about their appearance is the right one, as long as they're the one making it.

Of course, Bustle's Fashion & Beauty editors agree. So we're using the month of April (and beyond) to celebrate all the ways people fake their appearance, from wearing wigs, to lengthening their nails with acrylics, rocking permanent makeup, and more. Yes, there will be those who criticize this stance — but then again, there's always someone out there who will criticize any choice you've made. To that, I think the only answer is probably, "stop giving a sh*t."

"Anything you do to alter your appearance is contrived," Hernandez says. "So if dyeing your hair makes you feel younger and more confident, then to you that is natural, not fake. Some people wear weaves and extensions and consider them very much their own hair. It is only a contradiction if you feel that what you are doing is not natural, but that changes with individual taste. To me, injectables are unnatural, but there are many who would not feel themselves without them."

As someone with one millilleter of Juvaderm resting quietly in her lips as I type this, I have to concur with her last point. And, unlike my younger self, I'm at the point where I'm no longer interested in judging the overt, undisguised, impossible-to-ignore beauty choices of other women. There's nothing fake about faking it — in fact, for some of us, it's how we keep it real.