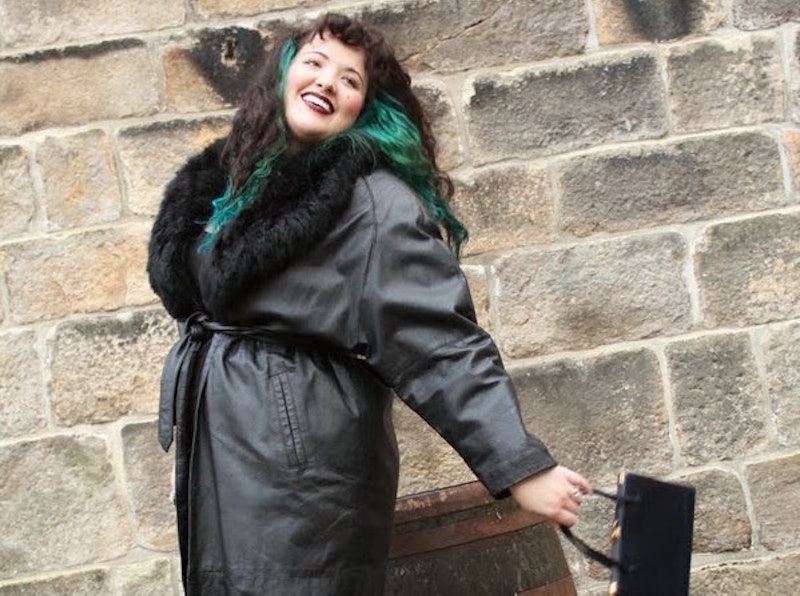 When you think of the term vanity, what images pop into your mind? Do you think of the Tumblr blogger who shares a new selfie every hour? Are you reminded of characters like Blair Waldorf, Kelly Kapowski, or Dionne "Dee" Davenport? Or the women who spend "too much" time applying their makeup in the morning because they refuse to be seen in public without foundation on? And if you picture any of the above, what exactly are you thinking? "Gosh, what shallowness and vapidity!" Or, "Good on that individual for exuding unapologetic confidence in a way that feels right to them"?

"Vanity" is a word that will, more often than not, be used to indicate arrogance and egotism. It's one of the Seven Deadly Sins. It's a characteristic to "watch out for" in a partner. But the dictionary also indicates that it is synonymous with "self love" — something that's not always encouraged by society at large, but that is unquestionably important nonetheless. As Huffington Post reported, loving yourself is scientifically proven to improve the quality of your life, from better allowing you to address and care for your mental health, to helping you maintain a more positive and optimistic outlook overall, to encouraging you to stop procrastinating. So why is vanity always seen as a negative?

Well, most of us can agree that self love isn't something perpetuated by the mainstream. If it was, every form of media would be as diverse, inclusive, and intersectional as possible so that everyone, no matter how they looked, would feel like their body was the "right" type. If it was, approximately one in four children wouldn't have tried some sort of dieting behavior by age 7, as per research studies conducted by Common Sense Media, with children as young as 5 expressing dissatisfaction with their bodies. If it was, we wouldn't give the diet industry $6.3 billion a year in weight loss services, or spend over $2 billion per year on anti-aging skincare to make ourselves look "better." But more than not being perpetuated, self love is arguably looked down upon. To openly love yourself — to openly think you're beautiful — is to be vain. And to be vain is to be an arrogant prick.

It's a problem that one might argue stems in part from the upholding of Christian dogma by American culture at large. Approximately 70 percent of Americans identify as Christian and, according to most facets of the religion, pride or vanity is one of the Seven Deadly sins. So, culturally ingrained disdain for vanity makes sense, similar to how women's reproductive rights are still up for debate.

But, in my experience, many people who don't identify as Christian also deem vanity as a problematic trait. They agree with the dictionary definition, which cites "excessive pride in one's appearance, qualities, abilities, achievements, etc."

But who gets to draw the line? How much pride or love for yourself are you allowed before it turns into the negative type of vanity? And how much is too little if you don't fancy being perceived as self-conscious or insecure?

Well, if we're talking about celebrities, apparently it's the Internet that gets to decide (the Web is pretty much is the equivalent of a Millennial's deity).

In Zimbo's "Who's The Most Vain Celebrity On Instagram?" top perpetrators of self love madness include Kylie Jenner and the rest of the Jenner/Kardashian clan, Rihanna, Taylor Swift, and Beyoncé. The analysis was based on their follower count and the amount of selfies they had posted in the past year. And in a list of 10 names, the vast majority were women — with only Justin Bieber and Harry Styles comparing to the egocentricities of their female counterparts.

Women's lifestyle site Madame Noire dubbed the likes of Katherine Heigl, Nicki Minaj, and Kimye amongst its "Celebs Who Love Themselves As Much As Their Fans Do." Heigl made the list for withdrawing her name from Emmy contention for her role on Grey’s Anatomy because she felt she wasn't "given the material this season to warrant an Emmy nomination," and she wanted to open the floor to actors she felt deserved it more. Minaj crossed the vanity line because "anybody who speaks in the third person has to enjoy putting themselves on a pedestal." And as for Kimye, they're on there simply because, "Both have horrible reps for being vain and their recent photo ops are pretty much proving it. It’s 40 degrees outside and you’re eating ice cream?"

The ice cream thing excluded — I'm not exactly sure how eating ice cream when it's cold outside makes you particularly vain — these folks have largely been dubbed as much for being female and confident in their abilities (á la Minaj and Heigl), for posting "too many" pictures of their faces on social media, or for being men who only date the most conventionally attractive women out there.

In other words, men are vain if they show blatant preferences for partners that most of the world might deem "sexy," or for being womanizers of sorts. And women are vain if they are open about believing in themselves, their talents, their merits, or their aesthetic beauty. Based on these interpretations of vanity, it's safe to say that to be vain in contemporary culture (at least as it applies to women or feminine people) is not necessarily to think one is better or more deserving than anyone else. But simply to think one is good.

On paper, believing in yourself, your talents, your merits, or your aesthetic beauty don't sound like horrific qualities. To me, at least, they sound like markers of self-worth. But in a world that perpetuates ideals of aspirational beauty, of diet culture, of the necessity of "fixing oneself" or becoming "the best you ever" before you can actually live, these qualities are a complete threat. If more people were taught to love themselves — to see the beauty in their natural faces, to see that their weight isn't "wrong," to understand that women can be just as powerful as men — the way beauty is interpreted and marketed would have to drastically change to survive.

The $62.46 billion cosmetic industry would likely have to follow in the steps of campaigns like MAC's MACnificent Me, which brought inclusivity and diversity to beauty advertising. Over 100 million dieters in America might just realize that diets are generally designed to fail, and more importantly, that you don't need all those weight loss products to achieve a fulfilled life. All those articles about beach bodies and marketing that claims "the perfect body" is only one bra away would have to revamp. And publications that rely on such terms would have to take their cues from the likes of Women's Health, which banned the phrases "bikini body" and "drop two sizes" from future covers as of Dec. 2015. As people embrace self love more and more with the uprising of body positivity, industries are clearly having to reevaluate some of their priorities. So if even more people embraced self love-inspired vanity? We're talking about massive industry overhauls. Are such overhauls possible? Of course! But do they take a lot of work? Most definitely.

I'm Morbidly Obsessed With Myself Plus Size Tee, $25, readytostare.com

And when we're talking about marginalized communities, vanity arguably becomes even more of a threat. If fat people, for instance, started to think they were beautiful and worthy, more radical change would begin to be demanded than simply an end to the diet industry's reign. We don't live in a society that commonly highlights body diversity in its mainstream media — not in television, not on TV shows, not on musical stages, or in glossy magazines. Rather, with the help of those mediums, society encourages the idea that fatness is bad: That it's ugly, undesirable, always unhealthy, a sign of greed, corrupt, and less-than-human. So when fat people claim their right to vanity, our social structure crumbles just that little bit more.

It's something that activist and writer Jes M. Baker of The Militant Baker calls "Body Currency:"

We are taught as a society that IF we achieve the ideal body that we see in traditional media (and not before) we will then obtain love, worthiness, success, and ultimately — happiness. Which is what we all want, right? [...]So THEN after all of this, when a fat chick — who hasn't done the work, who hasn't tried to fix her body, who doesn't have any interest in the gospel we so zealously believe in, stands up and says: I'M HAPPY! ... we freak the fuck out.Because: That bitch just broke the rules. She just cut in front of us in line. She just unwittingly ripped us off. And she essentially made our lifetime of work totally meaningless.

Of course, happy, proud, vain, fat people don't have to be a threat to thin people or to aspirers of conventional beauty. If we were more readily willing to recognize that beauty is subjective, that some people want to be thin and some people want to be fat, that some people are mainly attracted to thin partners, while some people are mainly attracted to fat ones, and that it's all just OK, everyone would likely be able to carry on with their lives and with their own breed of healthy vanity without needing to apologize for it. But the world doesn't have as much love for empowered women as it should — let alone for empowered women who are breaking its rules for cisnormative, fair-skinned, able-bodied, slender beauty.

Women have fought so hard for their rights in a myriad of other categories, but the right to love oneself still seems so far away. Among the rights we still have to fight for are equal pay, the right to choose, the end of rape as punishment in developing nations, the end of corrective rape in developing nations, the right to be better educated about sex and consent, and an end to gendered careers. When reading these issues back, of course, they seem far grander, far more pressing, and far more important than the right to vanity and self love. Except that it all might interconnect. Because if women believe in their worth, their beauty, their skills, their talent, and their equality, they might just believe in their right to keep fighting for better things. For a fairer future.

So to me, there's a difference between vanity and arrogance that should start to be recognized. The latter is to assume superiority over others; to hold oneself in a position that would enable you to look down upon those around you. But to be vain is to see your merits, be they aesthetic or professional or personal or otherwise. It's to be able to say, "I have worth," or, "I am beautiful," or, "I deserve more," and know deep down that the words couldn't be truer.

To be vain, in a way, is to acknowledge that we've been taught to hate ourselves, to believe we deserve punishment, to think we are inferior when in fact we are equal, and to pick apart at a dictionary's worth of our supposed flaws — and to then tackle all of it, while holing our heads up high, and sometimes taking a hundred selfies to document the journey.