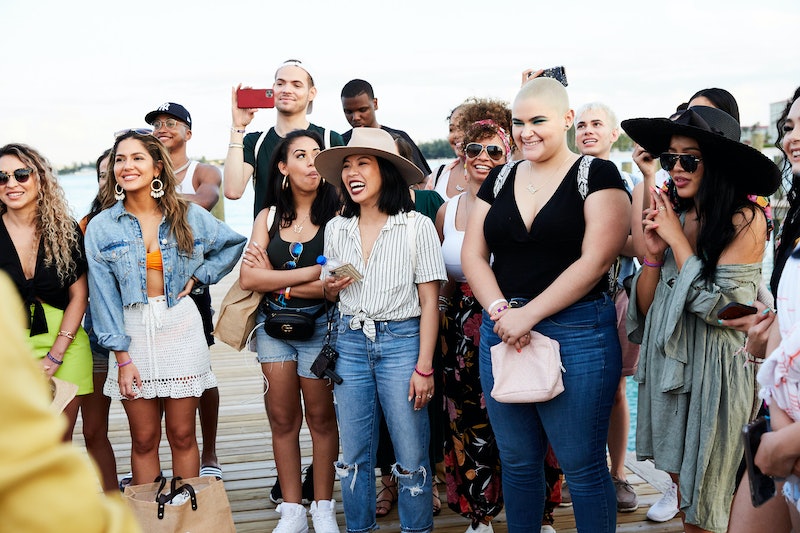 “This weekend is amazing,” Frankie J. Grande tells me in between sips of ice water. “You could write a whole, long story about this weekend." We are in the Bahamas to attend Beautyscape: an annual four-day event put on by e.l.f. Cosmetics where makeup-loving influencers team up to compete for the opportunity to create a capsule collection for the brand and win $10,000. This is e.l.f.’s fourth iteration of Beautyscape, Grande’s third time hosting, and my first time getting to soak it all in IRL. The whole thing kicks off with welcome drinks in a poolside club unironically called “Privilege,” which was lit only by a blue glow coming off the pool and a few bulbs with a pink filter.

After the welcome speeches — by Grande and e.l.f’s Vice President Gayitri Budhraja — and a Junkanoo performance, the 25 contestants who were selected to attend started to mingle. The e.l.f. team reiterated many times that this would be a life-changing weekend for them, and the influencers generally already seemed convinced of that sentiment, just based on the buzz around 2018’s winners. “I almost threw in the towel,” one woman from Ohio tells me, speaking about being a career influencer. “But then this happened, so I figured OK, I'll give it another go."

The night wraps up fairly early, because the next day is long and starts promptly at 9 a.m. with a keynote speech from hairstylist and entrepreneur Jen Atkin. She talks the audience through her career journey from sneaking backstage at Fashion Week to taking on celebrity clients (you’ve definitely seen her in the Kardashians’ Instagram photos) to launching her Mane Addicts website to creating the haircare brand OUAI. All this was possible, Atkin says, because she believed in seeing other artists as potential collaborators, not competition — a sentiment that appeared to be eagerly absorbed and put into practice by all the influencers in attendance as the entered the actual contest portion of the trip.

The only preliminary guidelines the contestants received is that the collection they’ve been tasked with creating must be inspired by the Bahamas, so on the first full day of the trip we pile into Jeeps after Atkin’s speech and head out to explore the island of Nassau. The first stop is a tour led by Bahamian artist Antonius Roberts, which brings the group on a walk through town to look at the brightly colored murals that cover many of the walls. (Unsurprisingly, these murals show up on every team’s mood board when they present the following day.) The group also packs hygiene kits for people who are still displaced in the aftermath of Hurricane Dorian and makes leaf prints at the base of the Queen’s Staircase. There is also a lunch at Roberts’ studio, during which members of the e.l.f. team present their Spring/Summer 2020 trend predictions to help further guide the contestants while making their collections.

With their brains and iPhone camera rolls packed full of inspiration, the influencers hop onto a catamaran to head back to the resort where they are dramatically broken up into five teams and sent sprinting off the Baha Mar's dock to start their product brainstorming. More guidelines are also announced: The collection must have at least three products (one for eyes, one for lips, and one for face) and the eye product must be a palette. Each team is paired up with a graphics designer, who will help them create the pitch deck for their presentation. They must be ready to present to the panel of judges at 3 p.m. sharp the following day wearing a makeup look inspired by the capsule collection they’ve come up with. They can work all night if they want, although one of the event’s producers emphasizes that they “must stop to eat dinner at some point between 8 and 10 p.m.” The next morning, I hear that at least one group stayed up working until 4 a.m.

In true reality show competition fashion, Grande and other mentors from e.l.f. stop by each team’s room about an hour after they’ve started and after breakfast the following day, just to check in on their progress and answer any questions they have about their concept or the actual possibility of creating the products they’ve dreamed up in their heads. The mood amongst the contestants is an infectious mix of giddy enthusiasm and extreme nervousness. And, at least when the cameras are in the room, I’m pleasantly surprised and inspired by the fact that all of these influencers seem to be genuinely getting along.

On Saturday morning, everyone shows up — most wearing only their skin care and lash extensions, a rarity on a trip filled with people who can whip out more variations of a perfect smoky eye than I could even dream up — at 9 a.m. to get a masterclass from makeup artist and Beautyscape judge Nam Vo. After we all learn to perfect the #dewydumplings look Vo has become famous for, the contestants head back to their room until lunch. While they scarf down a last meal before the big moment, Chillhouse founder Cyndi Ramirez offers some advice for building a business-focused career in beauty. Then, the contestants rush back to their room to apply their makeup and any finishing touches to their deck before the presentations.

For the final part of the competition, each team has 15 minutes to pitch and 15 minutes to answer questions about their capsule collection in front of a panel of four judges: Vo, Kory Marchisotto, the CMO of e.l.f.; Alison Conlon, a buyer at Target; and Jason Wagenheim, Bustle Digital Group’s CRO. We’ve come a long way from poolside drinks at Privilege, and an entire spectrum of emotions are high as team explains how their collection ties in to the Bahamas and why it would resonate with the Target consumers. One group gets almost everyone in the judging room to cry.

Then, it is dinner time. After a quick cocktail hour by another blue pool, each team presents a 2-minute version of their pitch to everyone on the trip, and the winning team — Elicia (@lishalovesmakeup), Jessa (@jessanista), Alissa (@alissajanay), Diana (@easyneon), and Valeria (@valelorenbeauty) aka The Glam Gyals — is announced. All details about what their capsule collection will contain is under wraps until it launches next spring, but I can assure you it is gonna be good.

The mood at dinner is mixed (even in the middle of paradise, not winning $10,000 sucks, you know?) but the overall spirit of collaboration is still there. Everyone already followed each other on Instagram on day one, but now phone numbers are also being exchanged. Plans to meet up the next time she’s in New York or he’s in LA or they’re in Austin are made. Further artistic collaborations are pitched and jobs are unofficially offered over glasses of wine and plates of dumplings. Lit by the blue glow of our final pool setting, everyone looks elfing amazing.