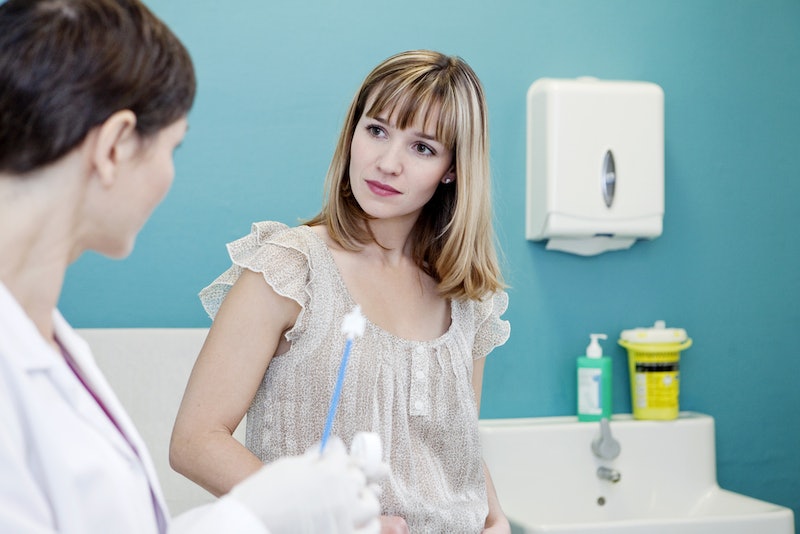 In 18 months' time, I will receive a letter I've been dreading. That letter will invite me to book an appointment for a smear test. My anxiety may seem a little unwarranted, but from talking to other people my age, I know I'm not alone. It seems the problem doesn't go away with age as millions of women are still putting off a five minute thing that could save their lives. To help stop unnecessary panic over what goes on in that doctor's office and to soothe my own worries, I've put together a guide describing exactly what to expect at a smear test.

The reason this passing on of knowledge has become so important is all down to new figures from Public Health England. As reported by the BBC, screening rates are the lowest they've been in two decades and almost three million women living in England haven't had a smear test in at least three and a half years.

Smear tests are easy to overlook but are one of the main ways to detect cervical cancer. According to Jo's Cervical Cancer Trust, 5000 UK lives are saved each year by smear tests. So you might want to think again before you delay that appointment.

Why do I have to have a smear test?

Although the test helps detect cervical cancer, this isn't its main purpose. Instead, smear tests — otherwise known as cervical screening — are designed to detect abnormal cells on the cervix aka the entrance to the womb.

The NHS states that around one in 20 women show abnormal cell changes. That isn't a reason to panic. Often, these cells will go back to normal on their own. However, some have the potential to turn cancerous.

The human papilloma virus (HPV) is often the cause of cell changes in the cervix. Abnormal cells will first be tested for this. If HPV is present, you may be asked to undergo a colposcopy which looks at your cervix in further detail. Cells may then be removed to stop cervical cancer in its tracks. But if there is no sign of HPV, there's really nothing to worry about.

When should I have a smear test?

As cervical cancer is incredibly rare in women under the age of 25, the NHS only recommends screening for women aged 25 and over. Once you've hit this milestone, you will be asked to have a smear test once every three years until you reach 49. After that, it decreases to once every five years.

Fortunately, you don't have to set a reminder. You should receive a letter in the post asking you to book an appointment at your local clinic. It's worth noting that you should aim to have your smear test during the middle of your menstrual cycle (around two weeks from the start of your last period) and should avoid having the test done when you're on your period.

What happens during a smear test?

The question every 20-something woman (including me) is dying to hear the answer to. I can't speak from personal experience but luckily a lot of women can.

The appointment itself will take around 15 minutes with the actual smear test lasting for just a few of those minutes. Usually, a nurse will carry out the test. You can request a female nurse if you feel more comfortable and are also welcome to bring someone along for support.

The nurse will tell you exactly what's going to happen and will be happy to answer any questions. They will then ask you to remove your underwear (and trousers if you're wearing some) and will direct you to a bed behind a curtain. There, you'll be asked to lie on your back with your legs bent, your ankles together, and your knees apart. Sometimes there are stirrups for you to rest your feet on.

The nurse will cover the lower half of your body with a paper sheet and will proceed to insert a plastic cylindrical-shaped device called a speculum into your vagina. Doctors recommend taking deep breaths to relax the body. If you're too tense, you may feel some discomfort. If you feel any pain, inform the nurse.

Once the speculum is in, the nurse will open it a little and insert a small soft brush to collect the cells from your cervix. These cells will then be sent off to a lab for analysis with results sent back within two weeks. Some women experience light bleeding for a day or so after the test. Again, this is nothing to worry about.

It's common for people to feel embarrassed at the thought of such an intimate procedure. In fact, a survey of over 2,000 women by Jo's Cervical Cancer Trust suggested this was the reason young women in particular did not make an appointment. Respondents said they were embarrassed they would smell or worried about the appearance of their body or vagina. A third even admitted they wouldn't go if they hadn't shaved or waxed down there.

One thing worth remembering is that doctors and nurses see all kinds of bodies day in, day out. You won't be the first and you definitely won't be the last. To them, a smear test is just another routine procedure. It probably should be that way for us too.