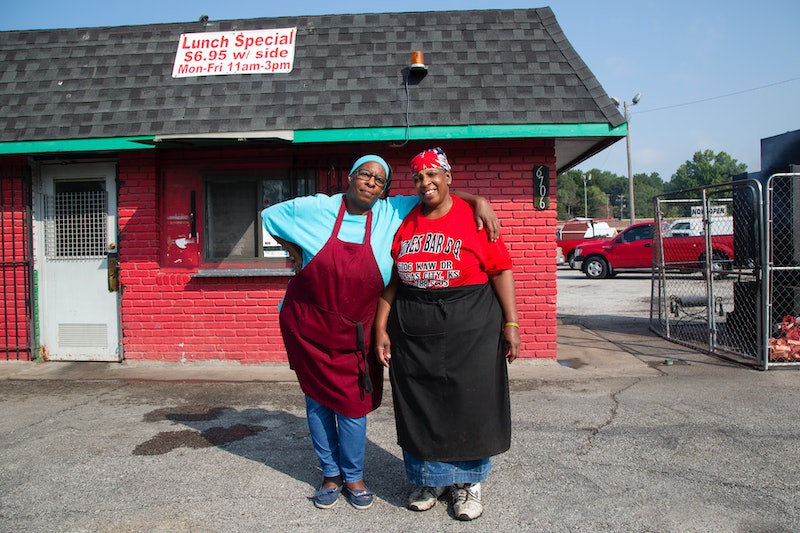 Spoilers ahead for Queer Eye Season 3. The Fab Five are back, and in Season 3 of Queer Eye, they're making over their very first duo — two Kansas City sisters with a knack for barbecue. The Jones sisters, Mary and Deborah (nicknamed Shorty and Little, respectively) reopened the barbecue stand run by their late father in "1970 something," according to the restaurant's Facebook page, in an effort to pad Little's daughter's college fund. Jones Bar-B-Q has been a hit among locals ever since, and their secret sauce, Jones Bar-B-Q sauce is a treasure on its own. After Queer Eye, people everywhere are going to be trying to get their hands on it, and luckily that's completely possible.

The QE guys not only gave the sisters personal makeovers, Bobby also redesigned and updated the barbecue stand, giving them new signage and a sweet outdoor setup. In the food category, Antoni was of course curious about their dad's secret sauce recipe. They refused to tell him the special ingredient, but hesitantly allowed him to set them up with a company to bottle it in mass quantities. Between the two of them, they would never be able to keep up with the demand for the sauce, let alone run the restaurant too. According to an interview Little did with The Kansas City Star, the sauce is now bottled by Spicin Foods (the company that bought Original Juan, from the episode), and those bottles that Queer Eye set up for them are already sold out.

Thankfully now, you can buy Jones Bar-B-Q sauce on their new site for $6.99 a bottle. You can also buy multiple bottles at a time (which seems like the obvious choice, right?) at three bottles for $17.97 and six for $29.99.

"It's been selling like crazy. The Fab Five did the first 700 bottles for us and we don't even have any more," Little told the paper. "We've already ordered another 2,000 bottles and we're thinking of getting more." According to The Star, the sales really up-ticked after the sisters appeared on Steve Harvey's talk show in December. Before the Fab Five came in to offer their help, the pit master sisters always had dreams of growing their business and marketing it on a larger scale, but they just couldn't find the time. Now, that dream of theirs is coming true.

"People think it's all just marvelous," Little told The Star, referring to the Fab Five's updates to the shop. "In the summertime we are going to have some jazz out here and they think that's just high heaven. We have some big plans for the summer, we're just waiting for it to get here!"

If the sisters have already been feeling the love from locals before their episode hits Netflix, they're going to be shocked by the attention they receive from the world. Because they sure are lovable — and so is their food, apparently.

Editor's note: This post has been updated with purchasing options for Jones Bar-B-Q sauce.