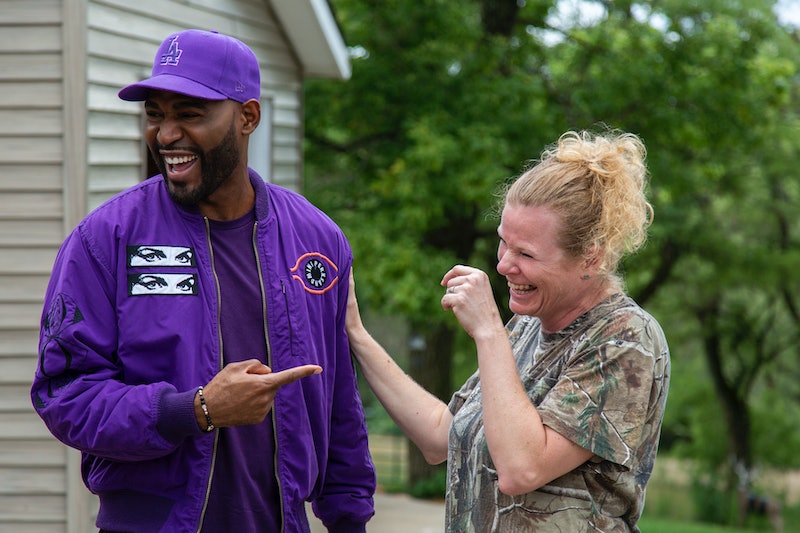 While honoring and respecting women should be an everyday event, Women's History Month's special day just for women-identifying folks is a great time to highlight the amazing women in your life. This year, even the Fab Five joined in the festivities. Queer Eye released a special International Women's Day Video as their own tribute to the day, and it just so happened to be a clip from an upcoming episode of the show.

In the clip, released right before International Women's Day on March 7, Karamo Brown introduces one of their newest heroes, Jody, to a diverse group of women who want to share how they view themselves and how they show themselves love. Karamo is the "culture" guru of the Fab Five, and is in charge of helping the social and inside growth of whatever hero they're working with that week.

It seems Jody has really lost that sense of connection with herself, and lost the desire to care for herself too, since her little brother died in a car accident at the age of 21. This group meeting is a way to help her get back on track. While the Season 3 premiere of Queer Eye doesn't get released until March 15, this "Circle of Empowerment" video is sure to hold you over until the premiere.

"In Jody's mind, when it came to being feminine, she thought she was 'doing it wrong,'" Karamo said in the clip. "There's no one way to be a women... So I've gathered a group of diverse women who have different backgrounds, that can empower her to feel confident about who she is." He does make another point later on that while the Queer Eye guys do their best to makeover their heroes on the inside and out, sometimes there are situations that can be better helped by others in a similar position or with similar experiences, like these women with Jody.

While in the "Sister Love Circle," the first woman to speak to Jody is Donna, who shares one of the hurdles she's gone through to achieve self-acceptance. "One of the struggles that I've been through is trying to fit into society's vision of what I'm supposed to look like," she said. "Wish I were taller, wish I were thinner, I've been on so many diets, I can't even tell you. And we're redefining what it means to be feminine because that can look like anything." Jody very much relates, and that just gets the circle going.

All the women go around, expressing insecurities, weaknesses, and traits they've had to accept or acknowledge on their self-love journey. One women expresses that society might have told her women look one way, but she's happy to challenge that "norm." "This is what a woman looks like, too," she said. "This is not an anomaly, you know. This is exactly who I am. This is exactly what I was meant to be and do."

The group proved to Jody that she's full of strength, and helped her open up. "You can see for the first time she starts to truly believe that she is special," Karamo said. "That she is beautiful and that she is important."

At the end, Jody expresses just how much they all did help in her growth and self-acceptance. "It's amazing to know that everybody's so different but we're all strong women, and that means so much to see," she said. "Femininity isn't what I'm thinking it should be when I'm looking in a mirror. It's what I want it to be and how I feel confident. It's right here." The video is definitely the perfect one to share on International Women's Day to help anyone else out there in need of these messages. Queer Eye, hittin' us with the feels yet again.

More like this
Move Over, 'Sunset'! The Drama-Filled Trailer For 'Selling The OC' Is Here
By Nola Ojomu
This 'Bridgerton' Polin x 'Love Island' Crossover Is Everything
By Darshita Goyal
Nadia's Breakups On 'Indian Matchmaking' Haven’t Stopped Her Search For A Husband
By Amanda Whiting and Brad Witter
Everything To Know About 'Indian Matchmaking' Season 3
By Brad Witter
Get Even More From Bustle — Sign Up For The Newsletter