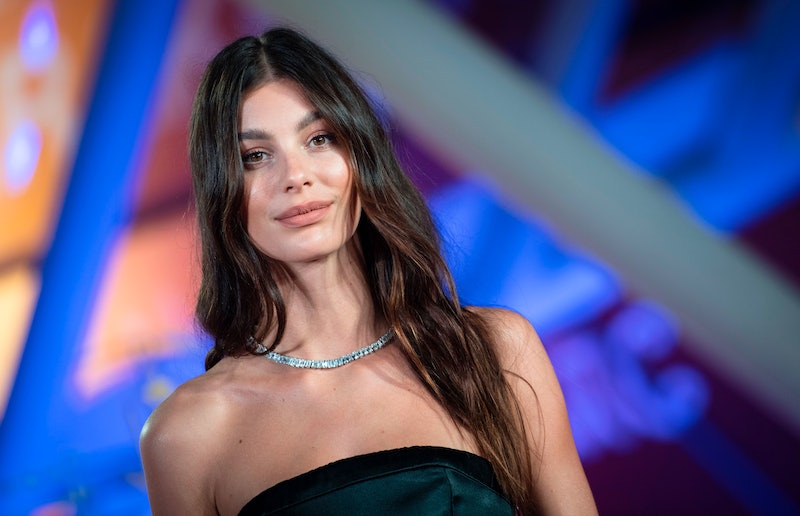 Leonardo DiCaprio, 45, got some attention at the Golden Globes this year, but it wasn't because of his nomination (he lost out to Taron Egerton). Rather, it was because of host Ricky Gervais' joke about the age gap between him and his partner. As Gervais roasted nearly every celebrity present, he said, "Leo DiCaprio attended the Once Upon a Time... in Hollywood premiere and by the end, his date was too old for him." For those who might not be up-to-date on the latest Hollywood ships or know who Gervais is referencing, here's the lowdown on who Leonardo DiCaprio is dating right now and a quick rundown of why Gervais made the joke he did that night.

Meet Camila Morrone, 22, DiCaprio's partner for the past two years and change. Morrone has previously worked as a model, posing for the cover of Vogue Turkey in 2016, and walking the runway for Moschino in 2017 (modeling the luxury brand's resort collection). From there, she branched out into acting, appearing in James Franco's Bukowski (2013), and Eli Roth's Death Wish (2018). Then in 2019 the Argentinean actress starred in Mickey and the Bear and picked up a solid amount of buzz for the role, with the Los Angeles Times calling her a "marvel" in the film.

Morrone and DiCaprio reportedly met in December 2017 and began what Metro called a "casual fling." According to E! News, over the course of the next year, the two became closer and closer, eventually meeting each others' families and vacationing together. (Though DiCaprio was already familiar with the man Morrone considers her "stepfather," none other than Al Pacino.) Thus far, those vacation photos and insider comments have been the only sources for news of their relationship, as the couple are fairly private about their romantic developments. To wit, they haven't been seen together at any public industry events, opting to walk red carpets and public events separately. Still, Us Weekly spotted the pair sharing a kiss during Netflix's Golden Globes party, writing that they looked "so in love."

That love, however, isn't without its fair share of criticisms, as comments and chatter about the 23 year age gap in their relationship spread about as quickly as paparazzi photos of them together. In December 2019, Morrone responded to her critics in an Instagram story, saying, "I just read some of the comments on my Instagram and, my God, people are so mean and, like, full of anger with people that they know nothing about." She continued, "Uh, I guess I just hope on this Friday that people learn to, uh, live with a little less hatred and place their time and interest elsewhere. Because living without hatred feels pretty good."

Morrone also addressed the backlash in an interview with the Los Angeles Times, where she said, "There’s so many relationships in Hollywood — and in the history of the world — where people have large age gaps." She continued, "I just think anyone should be able to date who they want to date."

Despite everything, the two of them seem to be as close as ever. And professionally, Morrone — who Vogue has called, "a breakout beauty star to watch" — is at the top of her game, on her own terms. "I think more and more now that people are seeing the film [Mickey and the Bear], I’m slowly getting an identity outside of that," she told the LA Times. "Which is frustrating, because I feel like there should always be an identity besides who you’re dating... I understand the association, but I’m confident that will continue to slip away and be less of a conversation."

More like this
Selena Gomez Is Fine Being Single, But She Still Manifested Romance On 'SNL'
By Martha Sorren, Jake Viswanath and Jack Irvin
Tanya Burr Is Expecting A Baby With Her Mystery Partner
By Maxine Harrison
Ralf Little’s Fiancée Has A *Very* Impressive Resumé
By Sam Ramsden
Justin & Hailey Bieber's Bond Is "Unbreakable" Amid His Ramsay Hunt Diagnosis
By Bustle Editors
Get Even More From Bustle — Sign Up For The Newsletter