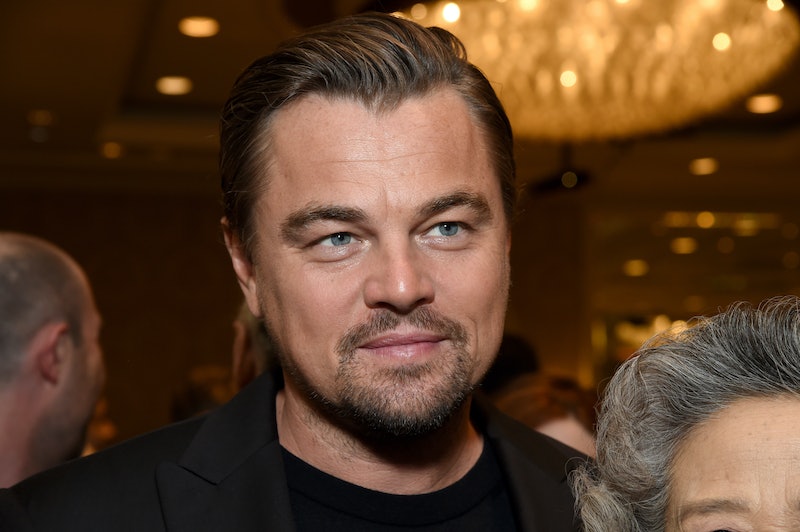 It turns out stars don't have to play superheroes to save lives IRL. On Wednesday, Jan. 8, The Sun reported that Leonardo DiCaprio saved a man from drowning in the Caribbean. The actor was apparently chilling on his luxury vessel near St. Bart's with friends and his girlfriend, Camila Morrone, when they heard an emergency call in search of a man who reportedly fell overboard. The man reportedly ended up treading water for hours before DiCaprio and the others helped save him.

According to the report, the actor was enjoying a vacation when he was called to action. A source reportedly told The Sun, "He saved the life of a man overboard who incredibly had survived by treading water for 11 hours. Leonardo's boat was the only vessel looking for him." Bustle reached out to representatives for DiCaprio, but did not receive an immediate response.

The man, who The Sun identified as a 24-year-old French crewman named Victor, reportedly fell from a Club Med yacht near the island of St. Martin and was later found near Saba island, which is south of St. Martin. Upon his rescue, The Sun reported that Victor was severely dehydrated and that he said about the incident, "I should have died." Victor was also reportedly given food and dry clothes before being handed over to the coastguard.

The reported incident has, of course, flooded the internet with Titanic jokes. Some people can't help but reference the movie's ending in which Jack saves Rose by letting her float on the makeshift raft, while he remained in the freezing cold ocean and ultimately died as a result.

The reported incident is eerily a lot like Jack and Titanic. Perhaps fans should consider this report the sequel '90s kids have been waiting for.