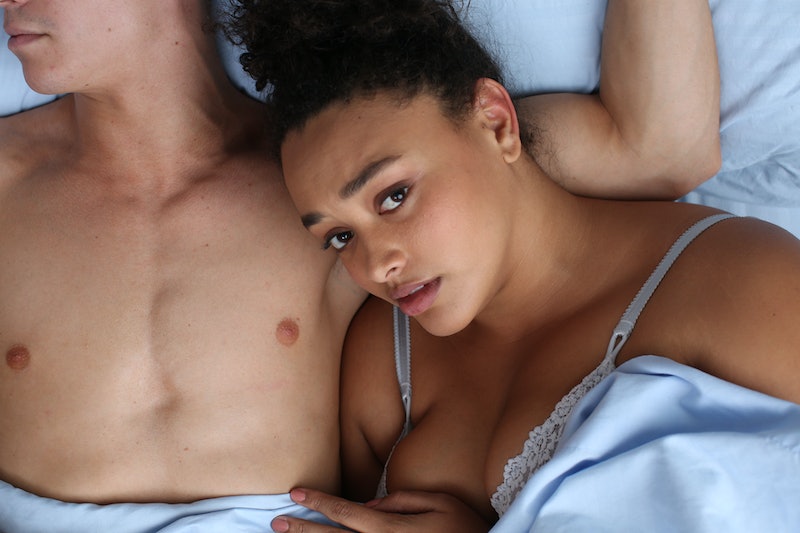 You may have heard rumors that lesbians have more orgasms than straight women, but new data shows that it is, undeniably, a fact. It turns out that heterosexual women are having fewer orgasms than any other demographic. Yikes. And it was no small study. Researchers from Chapman University, Indiana University and the Kinsey Institute looked at over 52,000 Americans to learn about their orgasm frequency. There was, as a lot of us have always known, a huge discrepancy between orgasm rates of heterosexual women and lesbians.

"As heterosexual women, we can keep our deepest desires and feelings about our sexual hidden from our partner and many do," Nikki Leigh, Love Coach and Host of Ready for Love Radio, tells Bustle. "This can limit our orgasmic potential dramatically. On the other hand — lesbian women, in many cases are dealing with their sexuality on a different level and likely with more open honest communication which is common in any 'alternative' relationship. These are just two factors that are known to boost a woman's orgasmic potential."

So what can you do if you're hetero and having trouble orgasming with your partner? "If heterosexual women increase their open honest communication with their male partners and that also let's them limit fears about judgment from their partner — they are likely to increase their orgasmic potential as well," she says.

I totally agree. And there's too much emphasis on vaginal penetration in a lot of hetero sex. Researchers found that "women were more likely to orgasm if their last sexual encounter included deep kissing, manual genital stimulation, and/or oral sex in addition to vaginal intercourse."

So we need to keep thinking outside the box — and by that I mean, the box of vaginal penetration. They also found that lesbian couples were better at taking turns in the sack, which means everyone gets the attention they need.

So exactly how big was the difference in orgasm levels? Well, here's what the researchers found, because men fared way better than women:

Straight Men Orgasm The Most

Ninety-five percent of straight dudes said they usually or always orgasm during intercourse. Anyone surprised? Anyone? OK, just checking.

With 89 percent of gay guys and 88 percent of bi guys usually or always orgasming, they're doing pretty well too.

Lesbians Were Almost Up There

Lesbians had an 86 percent usually or always orgasming rate, so they were almost as high as gay and bi guys. Well done, ladies. And as a women in a lesbian relationship I can say: HALLE-EFFING-LUJAH!

Things Drop Off For Women When There's A Man Involved

This isn't great. So once you add the potential of a man into the mix, then suddenly orgasm levels drop— only 66 percent of bisexual women and 65 percent of straight women said they usually or always orgasm. That's a huge difference. And while bisexual women obviously might have sex with women or men, historically bisexual women have been far more likely to be in a relationship with a man, so to me that explains the drop-off.

Wow. But, as the study notes, the fact that lesbian orgasm rates are so high shows that it's not really an issue with women. We just all need to be open about what it takes us to get there (and have partners who want to try).