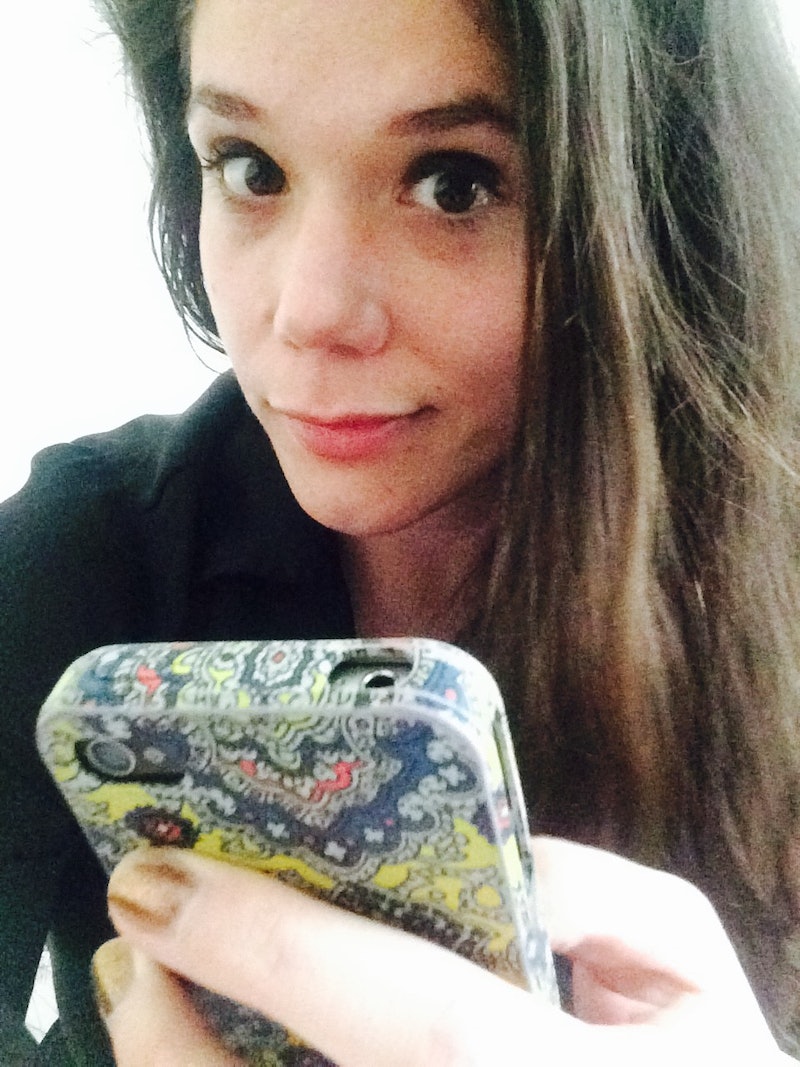 I'm a bisexual in a lesbian relationship and was totally shocked to read how rare that is. According to Kristina Marusic at Slate: "The massive 2013 Pew Research LGBT Survey found 84 percent of self-identified bisexuals in committed relationships have a partner of the opposite sex, while only nine percent are in same-sex relationships." Which made me go: Really? Really? I'm not arguing with the numbers, I'm just surprised the numbers are so... split. I assumed that, just based on how many people identify as straight, you would find the majority of bisexuals in straight relationships, but with a whopping 84 percent of them — it just seems too big of a percentage to be just that. So why?

"It goes back to societal 'norms,'" Amy Levine, sex coach and founder of Ignite Your Pleasure, tells Bustle. " I think some would say it's easier to be in a straight relationship. And it's simplifies having to explain to friends, family, co-workers etc. about their preferences. Not to mention, their preferred preference may be the opposite sex even though they may feel attraction and more to another gender."

Biphobia is definitely out there. In fact, it's more than biphobia, because it's pretty much bi-disbelief. If you identify as bisexual you've probably been told that you're lying, that it doesn't exist, or that you're not a "real" bisexual unless you sexual history is split right down the middle between men and women. Actually, you've probably had all three of these. It might be enough to keep you from even exploring bisexuality in a real way— or at all. Plus, it's easier in a lot of ways to be in a straight relationship, at least in my experience. You don't deal with comments or hollers or the complete invasion of privacy people seem to think is OK when you're in a lesbian relationship.

And it can get way worse than what I've experienced. Slate explains:

... there’s no shortage of research revealing that bisexuals live under uniquely intense pressures within the LGBTQ community: In addition to facing heightened risks for cancer, STIs, and heart disease, bisexuals also experience higher rates of anxiety, depression, and substance abuse, and are significantly more likely to engage in self-harming behaviors or attempt suicide than heterosexuals, gays, or lesbians. It isn’t difficult to imagine that for some, the promise of a bit more social currency and safety could be compelling reasons to seek out an opposite-sex partner, even unconsciously.

This definitely sounds convincing, but I think there's more to it than that.

Biphobia In The Gay & Lesbian Communities

I remember getting genuinely sad when my current girlfriend was explaining why some of her lesbian friends won't use Tinder — because they couldn't filter out bisexuals, which some lesbian dating apps let you do. The idea that I could have missed out on meeting my girlfriend because she was avoiding my entire type is pretty awful. Luckily, she's not that kind of girl and has no problem dating bi people, but the fact that it's out there— an option to 'filter me out'— just makes me feel gross.

There's a fear that bi people are just lying and they're going to leave you for a straight relationship and heteronormative privilege after they're done experimenting. Maybe the numbers point to some truth to the idea that most of them do end up with straight relationships, but I would argue that more bi people would be in same-sex relationships if more gay men and lesbian women were open to them.

Is It Just The Numbers Game?

But more than just a general dislike of bisexuals, is there a more basic numbers issue. Out of my three long-term relationship, only one has been with a woman. I think it's taken me this long to date a woman because I don't meet as many gay or bisexual women in my day to day life. Depending on the circles you run in, it's rarer than you might think.

Polls have revealed that while most people believe LGBTQ people make up a full 23 percent of the population, but the number is actually closer to a scant 3.8 percent. So not only is it statistically more likely more likely that a bisexual person will wind up with a partner of the opposite sex; it’s equally likely that they’ll wind up with someone from the over 96 percent of the population who identifies as straight.

The bottom line is, if you want to you can find opportunities for same-sex relationships as a bisexual. There are so many different dating apps and so many different communities. You can explore what you're looking for, but it may just be that you're fishing from a smaller pond. Hopefully people will stop being so mistrustful of bisexuality and be more open to dating bisexuals, and it will become easier. Until then, I highly recommend going and exploring same-sex relationships if you're interested. Plus, you can find anything on Tinder.