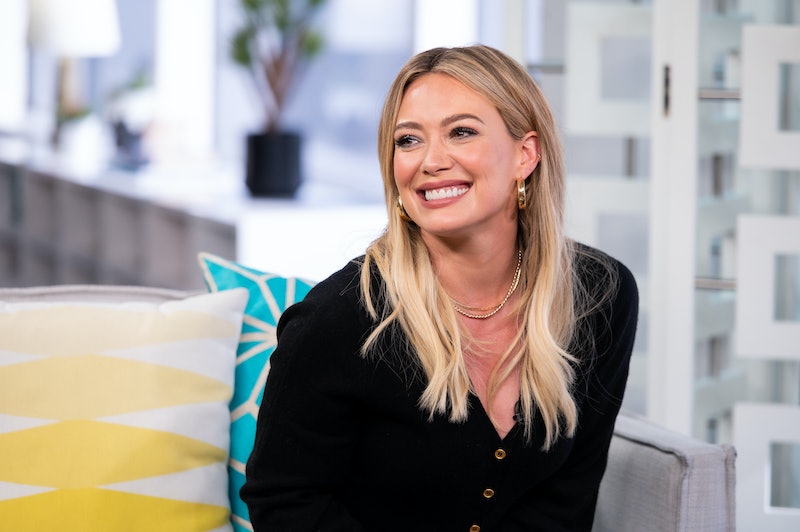 There may still be hope for Lizzie after all. With production stalling almost two months ago, Hilary Duff asked Disney+ to move the Lizzie McGuire reboot to Hulu in a Friday, Feb. 28 Instagram post. "I feel a huge responsibility to honor the fans' relationship with LIZZIE who, like me, grew up seeing themselves in her," Duff wrote. "I'd be doing a disservice to everyone by limiting the realities of a 30 year old's journey to live under the ceiling of a PG rating."

The actor, who played the title role in the original early 2000s Disney series, noted that she remains passionate about launching the revival but is also committed to making sure Lizzie's next chapters "are equally as real and relatable" as were the character's teen and preteen experiences. "It would be a dream if Disney would let us move the show to Hulu, if they were interested, and I could bring this beloved character to life again," Duff concluded her statement.

After two new episodes had already been shot, Lizzie McGuire creator Terri Minsky was fired from the role as the reboot's showrunner in January. Variety reported via sources that Duff and Minsky wanted to create a more adult version of Lizzie, whereas Disney had preferred to gear the show towards kids and families. Insiders claimed to the publication that Disney had initially been on board with the more grown up treatment, and Duff was displeased when they changed course and removed Minsky from the project.

In a Variety interview published on Feb. 26, Minsky said she was "so proud" of the two episodes they'd shot, also planting the seed of moving the new series to a different streaming platform. "Hilary has a grasp of Lizzie McGuire at 30 that needs to be seen," she said. "It's a wonderful thing to watch. I would love the show to exist, but ideally I would love it if it could be given that treatment of going to Hulu and doing the show that we were doing."

Duff had largely remained quiet on the matter, but seemingly broke her silence after it was announced on Feb. 24 that Disney was moving its series based on Love, Simon (titled Love, Victor) to Hulu after reportedly deeming the LGBTQ+ themed show not "family-friendly" enough for the Disney+ brand. The actor shared a screenshot of a news article to her Instagram Stories on Feb. 25 circling the headline, "Love, Simon TV Show Pulled From Disney+ As It's Not 'Family-Friendly,'" and adding in her own text, "Sounds familiar."

Plenty of fans have already taken action, too — threatening to cancel Disney+ (literally and figuratively) if the company doesn't give the reboot the justice they feel it deserves. One Lizzie McGuire change.org petition quickly picked up steam, reaching more than half of its 1,000-signature goal in less than two days.

"Lizzie is in her thirties and traversing these modern times. She represents so much in the beloved hearts of millennials and for decades, her true fans have cultivated a deep emotional connection," wrote Chris Jacob, the petition's creator. "Blindsiding millions of millennials by cheapening the authenticity of her character and the show and ignoring this core demographic is an injustice. Take what you want from us, but don't take away our TRUE LIZZIE."

Perhaps now that Duff has joined the fight, the message will reach Disney's mouse-shaped ears, too.

More like this
The First Trailer For 'That '90s Show' Includes So Many Nods To The Original Series
By Jack Irvin, Alyssa Lapid and Grace Wehniainen
Millie Gibson Still "Can’t Believe" She Was Cast As Doctor Who's Companion
By Brad Witter
This 'Black Panther' Character Is Starring In Her Own Marvel Show Next Year
By Grace Wehniainen
How The Thanksgiving Episode Of 'Gossip Girl' Changed Pop Culture History
By Gabrielle Bondi
Get Even More From Bustle — Sign Up For The Newsletter