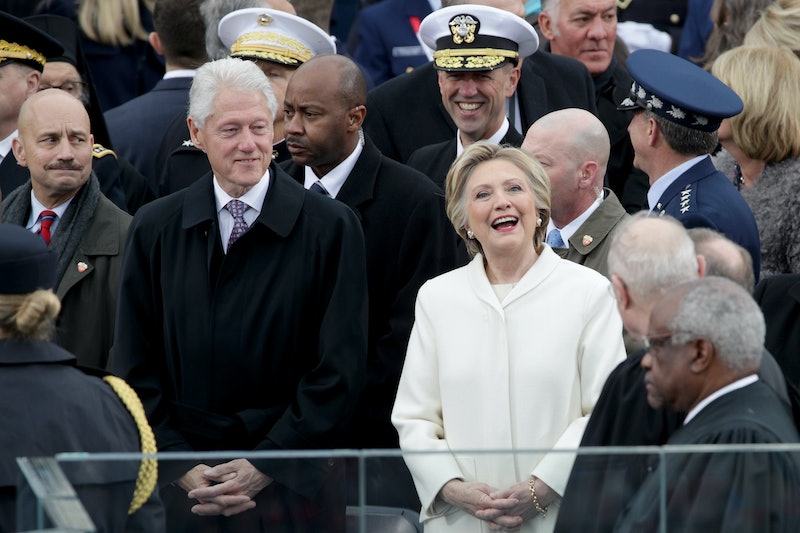 Starting on April 11, one of America's most famous couples is hitting the road again. Hillary and Bill Clinton's 2019 speaking tour will visit 10 cities throughout April and May, and will include a number of guest celebrities as moderators at each stop. And no, the tickets are not thousands of dollars — so this just might be the most inexpensive way to see Tony Goldwyn in person.

Bill announced the moderator guest list for six of the tour stops in a tweet on Wednesday, writing, "@HillaryClinton and I are hitting the road with some friends and we hope to see you!" The guest list included: Paul Begala, Ben Stiller, Nnamdi Asomugha, Star Jones, Jordan Klepper, and Tony Goldwyn.

As for what the tour will entail, their website provides insight into what you might expect if you buy a ticket:

Join President Bill Clinton and former Secretary of State Hillary Rodham Clinton as they participate in live events with audiences across North America. Experience a one-of-a-kind conversation with two individuals who have helped shape our world and had a front seat to some of the most important moments in modern history. From the American presidency to the halls of the Senate and State Department to one of the United States' most controversial and unpredictable presidential elections, they provide a unique perspective on the past, and remarkable insight into where we go from here.

According to The Hill, The Clintons' D.C. event is scheduled for the same night as the White House Correspondents' Association Dinner, which is considered one of the biggest nights of the year in the nation's capitol. Though neither of the Clintons acknowledged whether this was intentional or not, Hillary did call out some of the upcoming stops in a tweet on April 3. She wrote:

Next week, Bill and I will be in New York on the 11th with @PaulBegala (expect 2020 talk), Detroit on the 12th with @RedHourBen (expect belly laughs), and Philadelphia on the 13th with Nnamdi Asomugha (expect football & Broadway chatter). Looking forward!

The "Evening With the Clintons" speaking tour technically started back in 2018, with two November stops in Canada. Per CNN, much of a Toronto event was spent addressing the current presidency, with Hillary saying at one point of Trump's various headlines, "[You] literally you can't make this stuff up. A dozen times a day your head is spinning."

At another point, Hillary criticized Trump for his apparent refusal to listen to experts about climate change. She said, "It just riles me up. If you won't listen to people who actually spend time over decades studying problems, my goodness, your gut is not the answer to everything that is important in the world, I'm sorry."

Of course, it's more than likely that the Trump administration will come up in some way, shape, or form at the Clintons' stops — but a Clinton spokesperson has confirmed they won't just be talking about POTUS. In a statement acquired by The Hill, a spokesperson said that the two political titans will share "stories and inspiring anecdotes that shaped their historic careers in public service," as well.