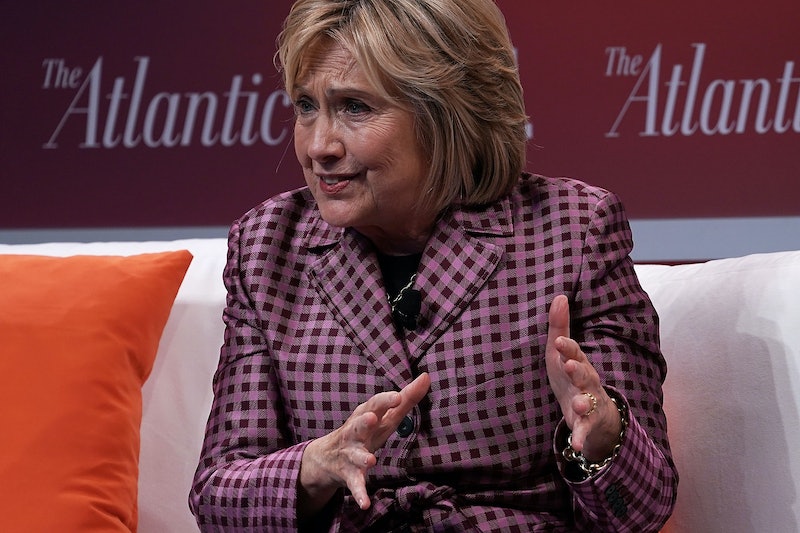 At a rally in Pennsylvania on Wednesday, President Trump accused Hillary Clinton of colluding with Russia during the 2016 election. He presented no evidence to support this allegation, and later in the day, Clinton responded to Trump's collusion claim with a sharp reminder about his own words during the campaign.

"Seriously, you asked Russia to hack me on national television," Clinton tweeted, referring to a July 2016 press conference at which Trump asked Russia to release emails that Clinton had allegedly deleted.

“Russia, if you’re listening, I hope you’re able to find the 30,000 emails that are missing,” Trump said on television while discussing Clinton's emails. “I think you will probably be rewarded mightily by our press.” Later that week, Trump reiterated on Twitter that "If Russia or any other country or person has Hillary Clinton's 33,000 illegally deleted emails, perhaps they should share them with the FBI!"

The president's accusation against Clinton notwithstanding, it's in fact Trump's team that's under investigation for possible collusion with Russia. Trump categorically denies that there was any collusion.

Nevertheless, former FBI Director James Comey confirmed in March that federal investigators were looking into possible "coordination between the [Trump] campaign and Russia's efforts" to influence the 2016 election. Trump fired Comey shortly thereafter, and the FBI investigation was taken up by Special Counsel Robert Mueller. Although Mueller hasn't commented publicly on the nature of the probe, Boomberg, CNN and NBC News have all since reported that one of the investigation's focuses is possible collusion between the Trump team and the Russian government.

Although it's been almost two years since Trump defeated Clinton in the 2016 election, he still regularly brings up her and the election. A quick search shows that the president has referenced Clinton at least 79 times on Twitter in 2018 alone, a tally that doesn't include off-the-cuff remarks he's made about her in speeches, interviews, and campaign rallies.

Wednesday wasn't the first time that Trump, who often accuses his opponents of doing things that he himself has been accused of doing, claimed that Clinton colluded with the Russian government during the 2016 election. He hinted at this in as far back as June 2017, when he lamented on Twitter that "Hillary Clintons family [sic] and Dems dealings with Russia are not looked at, but my non-dealings are." In January 2018, he wrote in a tweet that "the only collusion is with Hillary Clinton and the FBI/Russia." It's unclear why he sought to link the FBI with Russia.

At his Wednesday rally, Trump flatly stated that "there was collusion between Hillary, the Democrats and Russia."

"There was a lot of collusion with them and Russia and lots of other people," he said without elaborating. According to NBC News, Trump's comments were met with applause from the crowd, which began chanting "lock her up" — a popular phrase among Trump supporters during the campaign — after Trump brought up Clinton's name.