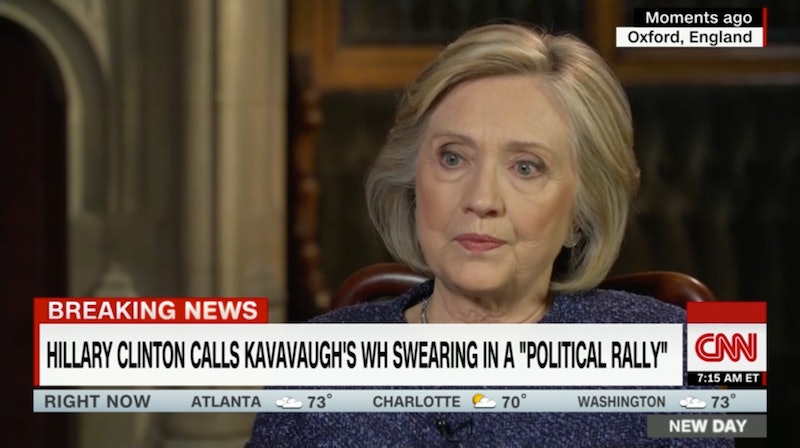 Speaking with CNN's Christiane Amanpour in an exclusive interview that aired Tuesday on New Day, Clinton said that Trump was "true to form" in how he handled the whole process.

"What was done last night in the White House was a political rally," Clinton told Amanpour. "It further undermined the image and integrity of the court. And that troubles me greatly. It saddens me because our judicial system has been viewed as one of the main pillars of our constitutional government. So, I don't know how people are going to react to it. I think, given our divides, it will pretty much fall predictably between those who are for and those who are against."

Trump hosted Kavanaugh's ceremonial swearing-in on Monday at the White House. He apologized to the justice and his family "for the terrible pain and suffering you have been forced to endure" and called the confirmation process a "campaign of political and personal destruction based on lies and deception."

Clinton by no means sounded surprised by what she'd seen at the swearing-in. "But the president's been true to form," Clinton added. "He has insulted, attacked, demeaned women throughout the campaign — really for many years leading up to the campaign. And he's continued to do that inside the White House."

At the ceremony, Trump implied in his speech that Kavanaugh had been "proven innocent," even though Dr. Christine Blasey Ford is "100 percent" certain that Kavanaugh sexually assaulted her. Kavanaugh denies those allegations.

There was no criminal investigation and he was not proven guilty or innocent. The reopened FBI background check completed just before Kavanaugh's confirmation produced no corroborating evidence, the Bureau said. The full scope of the report was not made public.

"What happened to the Kavanaugh family violates every notion of fairness, decency and due process," Trump said on Monday. "Our country, a man or woman must always be presumed innocent unless and until proven guilty."

All eight other justices were present for the ceremony. The Guardian reported that Justice Clarence Thomas, who was accused of sexual harassment by Anita Hill in the 1990s (he denied the charges), clapped when Trump said this. The paper noted that Justice Ruth Bader Ginsburg did not.

"And with that, I must state that you, sir, under historic scrutiny, were proven innocent. Thank you. You were," Trump continued, shaking Kavanaugh's hand as the room erupted into applause again.

Despite the partisan nature of Trump's speech, Kavnaugh tried to take a different stance. "The Supreme Court is an institution of law," Kavanaugh said. "It is not a partisan or political institution. The justices do not sit on opposite sides of an aisle. We do not caucus in separate rooms. The Supreme Court is a team of nine, and I will always be a team player on the team of nine."

Clinton's take on the issue may be the first of many. In November, Clinton, together with husband and former President Bill Clinton, will travel the country on the "An Evening with the Clintons" tour to speak about their experiences in public life.