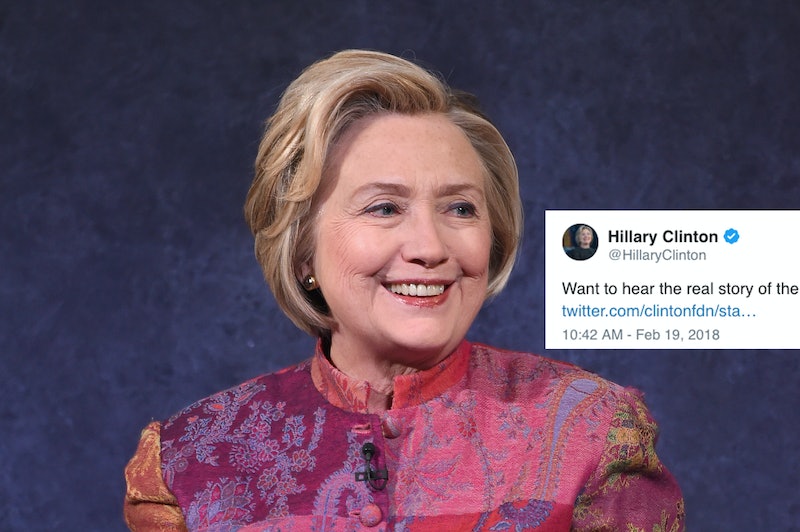 Hillary Clinton isn't done with Donald Trump just yet. Clinton threw shade at the current president when she tweeted about the "real" story concerning the Clinton Foundation. Trump has long criticized the organization, ran by Clinton and her husband, Bill, as being corrupt. By providing the "real" story, Clinton was implying Trump's take on the foundation was "fake news."

The former presidential candidate retweeted the Clinton Foundation, which had written, "ICYMI: President @BillClinton wrote on Facebook this week about our work improving lives in the United States and around the world, from fighting climate change to combating the opioid crisis."

In the Facebook post, Bill wrote of the foundation's work, including "helping farmers in East Africa, fighting climate change by promoting renewable energy, and opening opportunities for girls and women around the world." They've also been focused more on the United States, he continued, "combating the opioid epidemic, helping more communities and schools improve health and wellness, increasing early learning, and mobilizing relief efforts in the wake of the Caribbean hurricanes."

Bill referred to this as "the real news" about the Clinton Foundation. "Nevertheless, spreading false information about the Foundation continues, apparently as part of an ongoing strategy to distract attention from real problems and, over the long run, to completely erase the line between fact and fiction."

Trump has accused Hillary of engaging in "pay for play," alleging that she accepted an invitation to speak at a Clinton Global Initiative event in Morocco in exchange for a $12 million donation pledge to the Clinton Foundation from the nation's king.

Bill goes on to address specific criticisms of Trump's. "For example, just a few weeks ago on MSNBC, during a discussion of the President’s disparaging remarks about Haiti, his designated defender repeated the ridiculous assertion that I had taken money raised for Haiti for personal use and was responsible for the apparent suicide of a Haitian who knew all about it," he wrote. "Thankfully, the host cut her off, refusing to provide a forum for known false conspiracy theories. I’m proud of the work the Foundation and I have done in Haiti and will give you a more detailed report on that soon."

The former president claimed that the lies spread about the Clinton Foundation "began in earnest with the 2015 publication of the Breitbart-inspired book, Clinton Cash." While the foundation worked to debunk the book's charges, Bill wrote, "they were published as written even in 'mainstream' outlets, and even now the charges continue to be repeated online and in forums favorable to those who make them."

Bill went on to call out specific misinformation about the Foundation. "No, Foundation funds were not used to pay for Chelsea’s wedding," he wrote. "It’s not only untrue, it’s a personal insult to me, to Hillary, and to Chelsea and Marc." Bill added that he, Hillary, and Chelsea have never even taken a salary from the organization, and donate most speaking fees.

He also wrote that the Foundation never charged FEMA $7 for water bottles in Houston following Hurricane Harvey, or have any role in the recent tragedies, including the Las Vegas massacre last year.