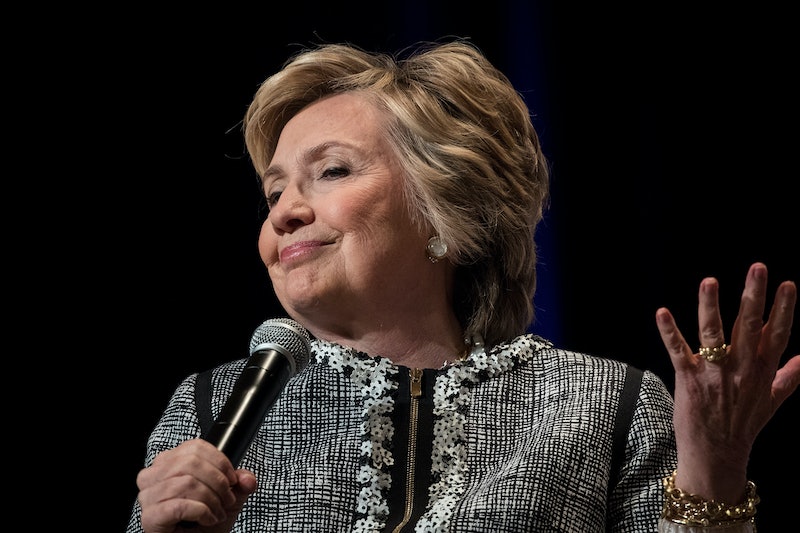 Though her use of Twitter is arguably less buzzworthy than President Trump's, Hillary Clinton has certainly posted some scathing tweets of her own in the past year. Unsurprisingly, most of these tweets were directed at her former campaign rival, but she did occasionally take aim at other members of the Republican Party, Fox News, the media in general, and the way certain events have unfolded after Election Day.

Clinton's stunning loss in November was followed by a brief low profile and a largely inactive Twitter account for the first few months. Little by little, though, she's returning back to the American public's consciousness with more frequent appearances, interviews, and, yes, tweets. In early May, Clinton launched a new political group, Onward Together, to "encourage people to get involved, organize, and even run for office," according to the announcement.

But while the group acts as her official post-election project, Clinton has made it clear that she won't shy away from everyday political discourse, too — if her tweets are any indication. It's worth noting, however, that they never seem to come with the caps lock-heavy, un-presidential tone that tweets posted by certain others do.

If you're in the mood for looking back at some of the former secretary of state's snarkiest tweets, here are just a few.

1. A Break From The Critics

Clinton's tense relationship with Fox News goes way back. She rarely grants the conservative-leaning network interviews and a 2009 leaked email between the former secretary of state and a family friend revealed that she believed shows on Fox "need at least one sane realistic voice." This 2014 tweet is likely one of the nicer things she's thought about the channel.

In response to the fifth Republican primary debate, Clinton shared this post calling out the policies proposed by Republican candidates.

3. Still Can't Believe He Tweeted That

The snark aimed at Trump here is well deserved. His 2016 Cinco de Mayo tweet remains one of his most cringeworthy to date: "Happy #CincoDeMayo! The best tacobowls [sic] are made in Trump Tower Grill. I love Hispanics!"

His words are so easily used against him.

5. This One Could Apply To Practically Anything

This particular comment was the beginning of a tweet storm responding to Trump's reluctant admission that Barack Obama was born in the United States and subsequent claim that Clinton was responsible for starting the birther conspiracy targeting the 44th president. This one can arguably be retweeted on a near-daily basis, though.

"Be yourself" is usually a nice, generic piece of advice to give most people, but it sounds like Clinton thinks Trump should perhaps be himself a little less.

7. She Was Not Playing Around

In continuation of the above tweet storm. This kind of rage is not found in most of Clinton's carefully-crafted social media posts.

The Clinton account's commentary was always on point on debate nights.

9. Serving Her Critics... With A Smile

Following criticisms made by Reince Priebus, who currently serves as Trump's chief of staff, insisting that Clinton's lack of smiling during a Commander-in-Chief forum proved her unfit to be president, this tweet here couldn't be more poignant.

10. The Brevity Here Is Beautiful

After President Trump's former national security adviser, Army Lt. Gen. Michael Flynn resigned amid concerns that he might have been susceptible to being blackmailed by foreign officials, Clinton enjoyed some schadenfreude by co-signing a biting tweet by her former campaign staffer, Philippe Reines. Flynn and his son Michael Jr. had both previously taken part in perpetuating a series of conspiracy theories about Clinton.

Citing the infamous Pizzagate story (which only the younger Flynn helped spread), Reines linked to a Dominos jobs page and wrote, "Dear Mike Flynn & Mike Flynn Jr., What goes around COMETS around. And given your pizza obsession..."

With every passing day of the Trump administration, more and more of Clinton's warnings are proven true.

Past the point of hiding her annoyance in this one.

After a campaign of struggling (and failing) to diffuse an array of scandals, it would be thoroughly unsurprising to learn that Clinton feels amused by Trump's struggles with his own never-ending list of scandals.

Second to her post-concession speech tweet offering words of empowerment to little girls, this is Clinton's most popular tweet, and it's easy to see why. It's as if this was the moment she (or the staffer who wrote the tweet) reached the point of no return and could no longer pretend that having a discourse with Trump would lead anywhere productive.

Rest assured the Trump administration will be providing Clinton with endless tweet material for years to come.