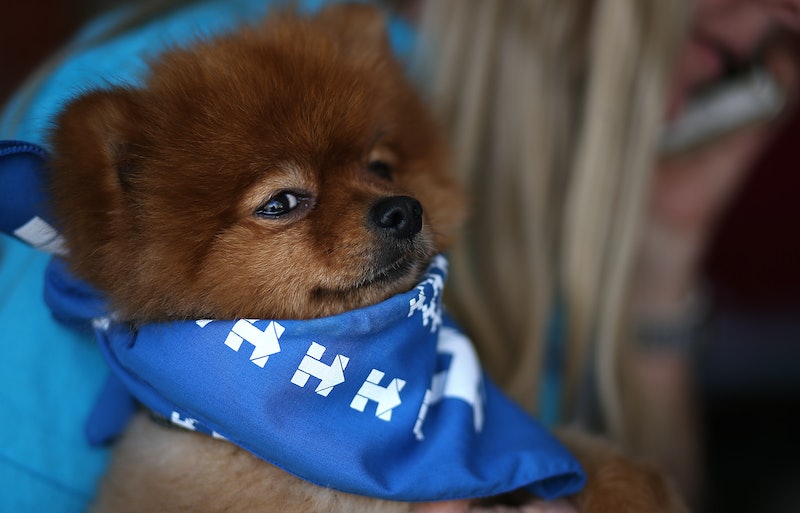 Last week, Hillary Clinton gave her first interview since her surprising loss in November's presidential election. Speaking at the Women in the World Summit seemed like a perfect fit for the public-figure-turned-presidential-candidate with a passion for women's rights and women's health. As it turned out, the interview wasn't just serious, as Clinton revealed that her favorite meme is a glorious mix of pooches and feminism.

During the interview, Clinton spoke about losing the presidential election to Donald Trump, her signature walks in the woods, her impressions of the Trump administration so far, and her favorite part of meme culture. As for the election, Clinton said, "The aftermath of the election was so devastating." On the recovery process post-November: "I am O.K. — as a person, I am O.K. As an American, I am pretty worried."

One thing that has troubled her about Trump's presidency so far is the discourse about women's health coming from the federal government. It's a concern that is expertly embodied in her favorite meme: an image of dogs sitting around a table talking about "feline healthcare."

The meme is a satirical spin on a very real photo from the Trump administration. It shows a group of several white men, including Jared Kushner and Steve Bannon, standing around President Trump as he signs an executive order that prevents U.S. funds from going to any overseas facility that offers abortions. No women are pictured in the room, even though it's women's bodies that would be affected by the executive order, quite literally, on the table.

Of the topic, Clinton said at the Women in the World Summit, "The things that come out of some of these men’s mouths, like, ‘Why do we have to cover maternity care?’ Well, I don’t know, maybe you were dropped by immaculate conception."

It's completely fitting that Clinton would choose "feline healthcare" as her favorite meme. After all, this is the woman who coined the phrase, "Women's rights are human rights." She delivered that powerful message back in 1995 at the United Nations' Fourth World Conference on Women in Beijing, China.

White House or not, it's uplifting to see that she's still standing up for women's rights today.