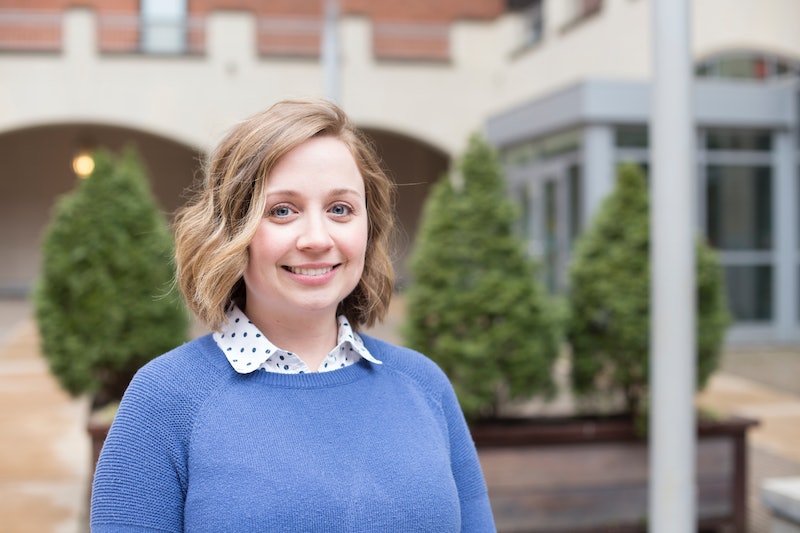 The 2016 presidential election dashed millions of American women's hopes for the election of the first female president. However, in the months that followed, women have also made it very clear that they will not give up the fight for equal political representation. That gender parity in politics is still a long ways off, considering the United States ranks 104th for women's representation in government, according to the Inter-Parliamentary Union.

But the 2016 election may have given women who never thought about running for office the incentive they needed.

For women like Emily Marburger, the election of Donald Trump — a man who bragged about grabbing women "by the pussy" and said he thinks working wives are "dangerous" — was the last straw. After the election, Marburger, a 29-year-old office manager living in Bellevue, Pennsylvania, got involved in political activism. Now she's running for mayor.

Shortly after the election, Marburger and a few others created PGH for Progress, a Facebook group that connects people in the Pittsburgh area to volunteer and find activism opportunities, like letter writing and getting involved in the county Democratic Committee.

Dissatisfied with the available choices for mayor as a Bellevue voter, she decided to run herself. "[I] just really evaluated my past experience and my talents and abilities against what a mayor does, I just decided to go for it," Marburger says.

Marburger is hardly the only American woman who has been inspired to throw herself into politics since Trump's victory. Since November, over 10,000 women have reached out to EMILY's List, an organization that trains women running for political office. The surge in interest amongst potential female political candidates may help remedy the egregious underrepresentation of women in American politics, which has only gotten worse. The United States' ranks as 104th in the world for female representation in government is all the more problematic, considering it was 52nd in 1997.

Lack of female representation at the local level matters, too. According to a NPR report, women make up only a quarter of state legislatures across the country — something made glaringly obvious each time a state passes a tone-deaf reproductive rights bill or a lawmaker out-and-out admits he's never considered why a woman might seek an abortion.

However, Marburger realizes that her path to involvement is not the only option. That is, getting involved doesn't have to mean running for office. It can also mean getting involved with your local political party and organizing that way, or reaching out to your elected officials.

"Figure out what you're passionate about and figure out how you best serve that passion," she advises.

If you're passionate about something and you know that you can do it, just keep trying.

However, as many women know, breaking into a male-dominated industry like politics isn't easy. Marburger knows it, too — as a millennial woman, she says she isn't always taken seriously. "I'm getting a lot of, 'Oh, well isn't that lovely,' and 'Isn't she sweet,'" she tells Bustle.

Other obstacles that hinder women from getting into politics, Marburger says, include the "boys' club" nature of the industry and the time commitment. "I have a lot of women who are saying, 'If I didn't have young kids, I would be doing this.'" And as research continues to demonstrate that women (including working women) do the majority of domestic work, this problem doesn't seem to be vanishing any time soon.

However, after the presidential election, she felt that letting those obstacles deter her from political engagement was not an option.

"Like the rest of us last November, I woke up to a situation I didn't know existed," she wrote in a post on Facebook group Pantsuit Nation that went viral. "I knew I had to get involved. I felt driven to help."

Even in a small borough like Bellevue, running for mayor has been a complicated undertaking, Marburger tells Bustle. She struggled to find information about the requirements necessary to run and to connect with the relevant local Democratic officials, but showing up and demanding answers has served her well.

"I just keep persisting," she says, paraphrasing the mantra that's become a rallying cry for women across the country. "If you're passionate about something and you know that you can do it, just keep trying."