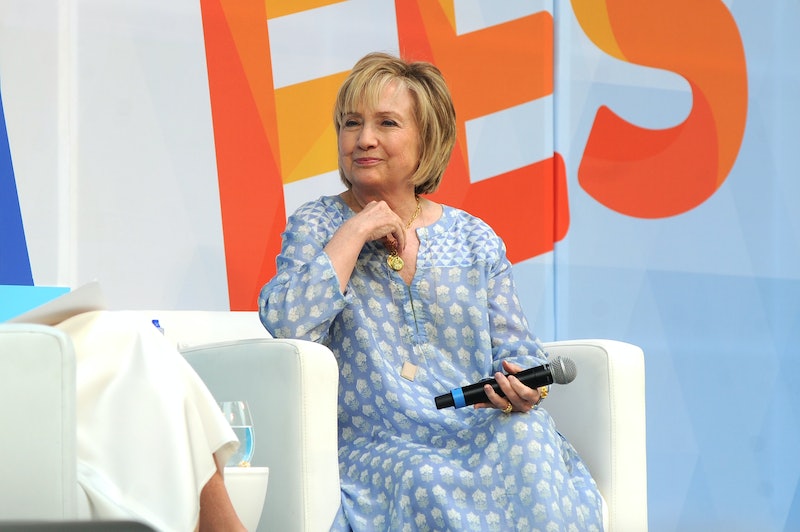 Even with real-life a 24-hour news cycle, American viewers can't seem to get enough political drama — and they grow especially excited when real-world politicians jump into the fray. Such was the case on Tuesday, when Hillary Clinton's cameo on Madam Secretary was formally announced, leading to a burst of excitement from many fans on Twitter.

Clinton won't be the only former secretary of state to make an appearance on the program's upcoming fifth season, either. Former Secs. of State Madeleine Albright and Colin Powell are also scheduled to have some screen time.

"Having three powerhouses of diplomacy agree to come on our show is awe-inspiring and humbling. And that we were able to find a time in their busy schedules when they were all available is a miracle," executive producer Lori McCreary said in a statement, according to Entertainment Weekly.

Clinton tweeted about the upcoming episode, which appears to have already been filmed. It is the program's season premiere and is scheduled to air on October 7.

"It was wonderful to spend some time with the team from @MadamSecretary on set in Brooklyn with a few former colleagues," Clinton tweeted Tuesday afternoon. "Mark your calendars for October 7th!"

Albright also tweeted a similar sentiment, also promoting the episode's air date. "It was great to be back on the set of @MadamSecretary with @tealeoni," Albright tweeted. "It is always nice to consult with my successors. The episode will air on #CBS on October 7."

The former secretaries will appear on an episode wherein the television show's main character, fictional Secretary of State Elizabeth McCord, calls on her predecessors for some advice during a "delicate situation," Deadspin reports. The episode was reportedly filmed on July 11.

Like other political dramas in its genre, Madam Secretary follows the personal and professional lives of those who work in and around the White House. It explores the fictional ins and outs of what, exactly, it takes to run the United States, with a particular emphasis on international policy and diplomacy.

All three former secretaries of state are historically significant, which makes their selection all the more interesting for viewers. Madeleine Albright was the first woman to be secretary of state, and Colin Powell was the first African American. Clinton, meanwhile, aside from serving in the cabinet position, went on to be the first woman presidential candidate nominated by a major political party.

"I Love love love this show and am super excited to see this!!" one user tweeted in response to Hillary's public announcement.

"MY BRAIN MIGHT EXPLODE FROM HOW MUCH I LOVE THIS," tweeted another user.

By and large, fans of the show seemed extremely excited for the upcoming guest appearances. Many said that they would be marking their calendars now — nearly three months out from the episode's scheduled air date.

"I'll be watching for sure!!," wrote one Twitter user.

Fans of the show will have to wait until the fall to find out what type of advice Clinton and her colleagues offer. As each has separately stated, the season premiere is scheduled for October 7.