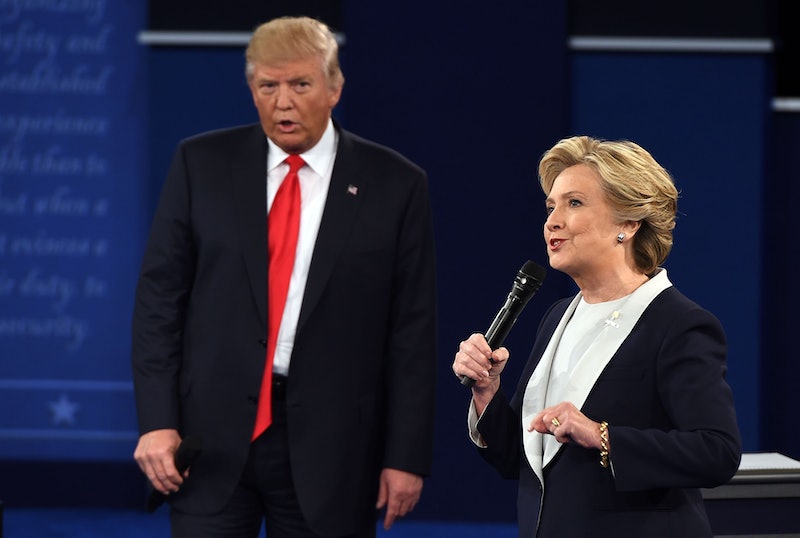 In a newly released excerpt from What Happened, Hillary Clinton's highly anticipated book detailing her 2016 presidential campaign, we're finally getting some of her unfiltered thoughts on Trump... and they're not pretty.

We all watched as Trump loomed behind Clinton during the second presidential debate, following her around the small stage. Just days before, Trump had been dealt what had then seemed as an insurmountable blow to his reputation, with the release of the now infamous Access Hollywood recording in which he bragged about sexually assaulting women. And even for a woman like Clinton who has spent her entire career in the old boys' club of politics, she admits in the excerpt revealed on Wednesday on Morning Joe that Trump actually made her skin crawl.

“This is not okay, I thought,” Clinton writes in What Happened. “We were on a small stage and no matter where I walked, he followed me closely, staring at me, making faces....It was incredibly uncomfortable. He was literally breathing down my neck. My skin crawled. It was one of those moments where you wish you could hit pause and ask everyone watching, ‘Well, what would you do?’ Do you stay calm, keep smiling and carry on as if he weren’t repeatedly invading your space? Or do you turn, look him in the eye and say loudly and clearly, ‘Back up, you creep. Get away from me. I know you love to intimidate women, but you can’t intimidate me, so back up.’”

It is almost painful how familiar this moment is to women around the world, who have had to deal with sexism both overt and casual while in a professional space. Especially when considering the increasingly anti-woman atmosphere Trump has continued to cultivate while in office, this excerpt is especially sobering to read.

What Happened by Hillary Clinton, $18.00, Amazon

But knowing that Clinton is now not holding back from speaking the truth of her experience of running against Trump is in its own way bolstering.

"I kept my cool, aided by a lifetime of dealing with difficult men trying to throw me off,” she writes. “I did, however, grip the microphone extra hard."

What Happened is due to hit shelves on September 12, 2017. To hear an audiobook recording of these excerpts, visit hillaryclintonmemoir.com.