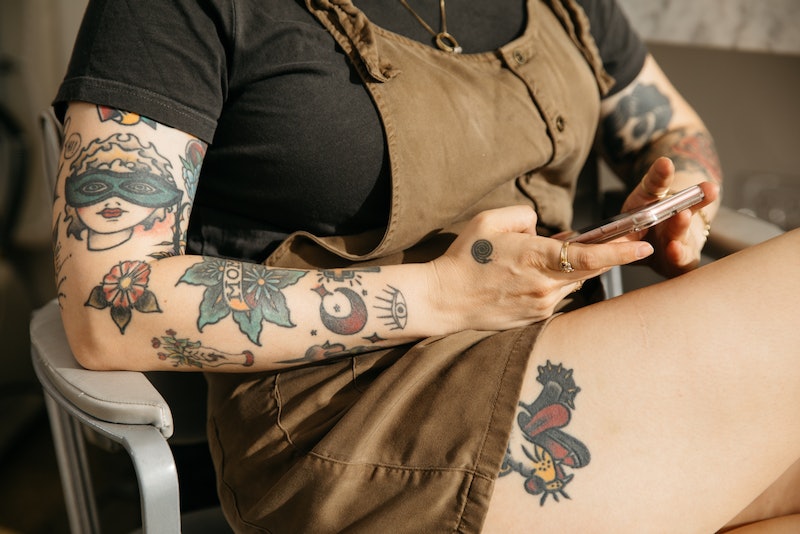 App-based dating can be a lot of swiping, texting with matches, and screenshotting funny profiles to your friends without ever meeting someone IRL. Let's face it — this can get old, which is why it's time to throw it back to old-timey days. On National Day of Unplugging, relationship-focused app Hinge wants you to get off your apps and out on a real date. If it's been a while since you've been on a real date, you're in good company.

According to Zoosk, half of singles in Britain reported never asking someone out in person, and 46 percent said they've never ended a relationship in person. "While online communication can make those tough conversations feel more pleasant, at some point, you’re going to have to talk to your date in person," Hayley Matthews wrote for Zoosk. In-person conversation is what Hinge has in mind for National Day of Unplugging on Mar. 1. The relationship app tells Bustle via email that 77 percent of its users feel they should spend less time on their phones. This is why Hinge is organizing IRL events in four cities across the U.S.

If you live in New York, Los Angeles, Chicago, or Miami, Freehand Hotel group is hosting events for Hinge singles to meet in person. But there's a catch: If you want to come to one of the events, you'll have to commit to turning off your Hinge app's "Discover" section for 24 hours in order to get invited. This means that during the event you'll have to approach people cold and ask them questions about themselves while they're standing right in front of you. Gulp.

"Hinge members in NYC, L.A., Chicago, and Miami who unplug by 5:30 p.m. local time will receive an invite to enjoy free drinks at the Freehand Hotel from 6-8 p.m. without digital distractions (members will be encouraged to put their phones away as they mingle)," Hinge explained in a press release. "All they need to do is show the concierge their invite on March 1 to enjoy some cocktails at the Freehand’s Broken Shaker bars."

If this all sounds scary and awful, it's actually not that bad. Older millennials remember life before dating apps, and it is actually possible to meet someone you like the old-fashioned way. In fact, while online and app-based dating is now the normal, there was a time people looked at you like you had two heads if you used a dating site. It was often only disclosed in whispered conversations, usually after a few drinks. According to the Pew Research Center, with the advent of apps, online dating is now more celebrated than stigmatized.

That being said, Pew also reported that one-third of people using dating apps or sites have never actually gone on a date, which kind of defeats the purpose. If you're seeking a partner, and you're in this one third, snagging an invite to a Hinge National Day of Unplugging event might be just what you need to take the next step.

Pew also noted that, in 2016, only 5 percent of couples who were married or in committed relationships said they met their partner online or on an app. What does all this mean? It's time to get off the apps and out into the world. If you get to the event and it's awful, just say you're going to the bathroom and then later the hell out of there. However, if it's good, you just might meet someone IRL that you've never matched with online who gives you all the feels.