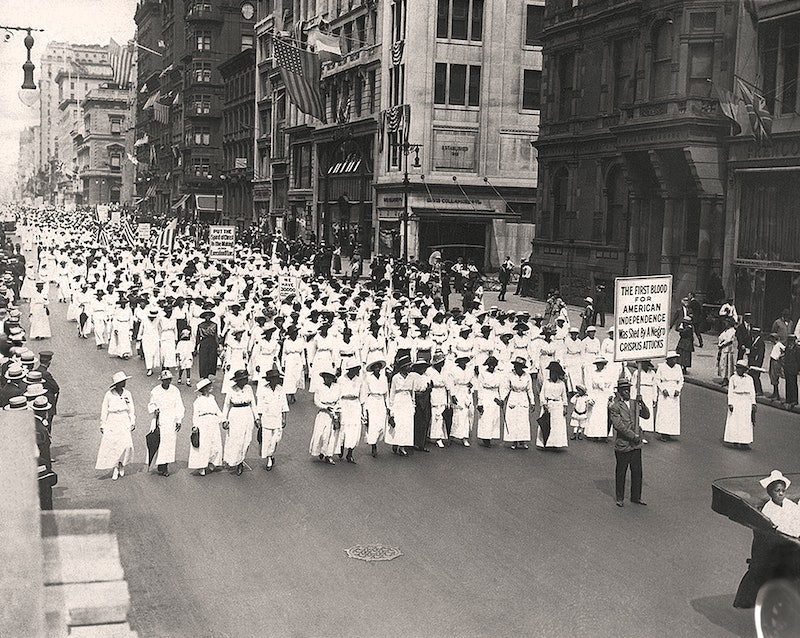 On the heels of a midterm election in which record numbers of women were elected to Congress, the Women's March is slated to take place on Saturday for the third year in a row. Despite facing ramped-up criticism in recent months, historians tell Bustle that the Women's March has built a platform of inclusivity inspired by other feminist protests and marches in U.S. history — and that it showcases the fact that women will continue to show up for what they believe in, despite what challenges arise.

The Women's March was first organized in Washington, D.C. in 2017, with sister marches taking place both across the country and around the world. The Washington Post characterized the 2017 Women's March as possibly the largest single-day demonstration in recorded U.S. history, though historians tell Bustle that it follows a long tradition of feminist activism. Throughout American history, women have fought for suffrage, racial justice, stricter gun control laws, and more.

"Women’s protest and resistance has a very long history and takes many forms, from consciousness-raising groups in the 1970s to the abolitionist movement in the 19th century to community organizing to working-class protest," Barnard College history professor Premilla Nadasen tells Bustle. "Large-scale marches are just one example."

The Women's March — like many of the movements that came before it — is a people's march organized by those most affected by the issues it targets, as journalist and historian Janus Adams notes. Three past protests in particular opened up opportunities for movements like the Women's March to take place, according to Adams: the Woman Suffrage Parade of 1913, the Silent Parade of 1917, and the 1963 March on Washington for Jobs and Freedom.

On the surface, it might seem like protesters were fighting for different things in each of those examples. The NAACP organized the Silent Parade in New York City to protest anti-black mob violence and lynchings across the country. The March on Washington was a protest for racial and economic justice. But these issues all intersect, according to Adams, in that at their core, she says all of these marches were about "the right to have a decent life of your own making, unimpeded by someone else’s racism, sexism, homophobia, Islamophobia."

"It is of equal importance to note hundreds of thousands of black women who participated in the organizing and marched for equality and justice."

The grassroots organizing landscape of American history is rich with examples of protests that paved the way for the Women's March. In addition to those mentioned by Adams, Temple University history professor Bettye Collier-Thomas highlighted feminist protests like the Equal Rights Amendment marches in the 1970s, the Million Woman March in 1997 organized by black women to demand equality and justice for themselves and their communities, the Million Mom March for stricter gun control in 2000, and the pro-choice March for Women's Lives in 2004.

Collier-Thomas suggests many of those protesters made mistakes that Women's March participants might learn from. The white organizers of the Woman Suffrage Parade of 1913 asked black women to march in the back, The Washington Post reported. And during the 1963 March on Washington, black women were not given speaking slots, even though they played influential roles as organizers and marchers, per The New Republic.

Although they often had to fight to take their place in various social movements, thousands of black women nonetheless marched in the Silent Parade of 1917, and hundreds of thousands of black women organized the Million Woman March in Philadelphia. As Collier-Thomas points out, race and gender intersect in critical ways and cannot be "isolated or separated."

"When discussing feminist protests and marches in American history, it is of equal importance to note hundreds of thousands of black women who participated in the organizing and marched for equality and justice," she says.

Since it was first organized after President Donald Trump's election, the Women's March has aimed to be more inclusive than many protests have been in the past. According to University of California, Santa Cruz history professor Lisbeth Haas, the organizers of the Women's March "built a stronger consciousness around inclusivity" in a way that previous protests hadn't.

As a result, the women of color leading the national Women's March worked hard to address inclusion, as Newsweek reported last year, including using their intersectional platform to urge cisgender white women to confront their own biases and participate in other social movements. The Women's March platform is explicit in its demands for not only gender justice, but also racial justice, economic justice, reproductive freedom, LGBTQIA rights, and workers' rights.

"It’s a very strong force, because they organized along these same principles of inclusion."

Criticism over participation in the protest being too white wasn’t the only issue the Women’s March had to confront. Co-chairs Tamika Mallory, Linda Sarsour, and Carmen Perez also faced criticism over their reported connection to Nation of Islam leader Louis Farrakhan and allegations that anti-Semitic comments were made in a Women's March meeting.

Mallory, Perez, and Sarsour have denied the allegations of anti-Semitism. When reached for comment, a Women's March spokesperson directed Bustle to the public statements the organization has posted on their website, including one that read, "Women’s March is committed to fighting all forms of oppression as outlined in our Unity Principles. We will not tolerate anti-Semitism, racism, misogyny, homophobia, and transphobia and we condemn these expressions of hatred in all forms."

"It’s a very strong force, because they organized along these same principles of inclusion, of young and old being present, of all women being included despite race, class, sexual differences," she says.

Despite tensions around this year's event, the Women's March is slated to take place on Saturday, and thousands of women are expected to attend, per ABC News. The Women's March organizers have committed to provide an open forum for dialogue and dissent, as The Cut pointed out, indicating that they have learned from the movements of the past.

"Building a movement is never easy," Nadasen tells Bustle. "It is a process that requires discussion, debate, and disagreement. The Women’s Marches are important because they have created an opening for us to have a deeper dialogue about the meaning of gender justice and feminist liberation — for all women and all people."