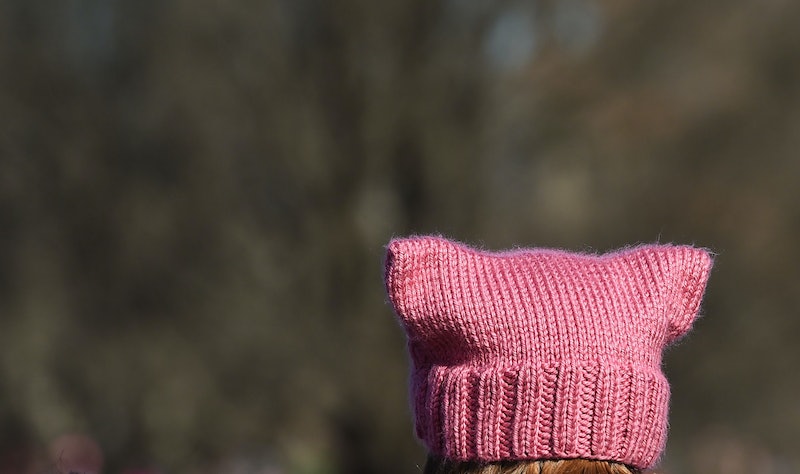 While tensions have simmered just below the surface since the movement's inception after the election of Donald Trump, awareness of the 2019 Women's March controversy has seemed to reach new heights — and has changed how some people are viewing the movement. As its reputation comes under scrutiny ahead of the third Women's March on Saturday, the national organization behind the event has lost key progressive sponsors, and that some cities have canceled their sister marches.

It's important to note that, while recent headlines may make it seem as if there's been an uptick in criticism of the event, people have raised concerns about the Women's March since the inaugural event. The day after President Donald Trump's inauguration, the march prompted debate about white feminism and what it truly means to be intersectional and inclusive.

“This march, the fact that it could go off peacefully and cops are wearing pink hats, and no one felt like they were in danger, and militarized police didn’t show up, that’s white privilege at its core,” author Luvvie Ajayi told The Washington Post at the time. "They have the access and ability to do the things the majority of black and brown people who protest don’t have.”

That being said, the historic nature of the Women's March can't be overlooked: Some counts indicate that the event attracted around 1 million people to Washington D.C. alone, and it might have been the largest single-day demonstration in U.S. history, according to The Washington Post. The Women's March inspired other rallies for equality around — and outside — the United States, and it has continued that momentum, holding a "Power to the Polls" voter registration effort before the 2018 midterm elections and focusing on an inclusive Women's Agenda policy platform in 2019. As Vox put it, the Women's March became a "political force" for activism that brought women together in a powerful way.

In the years since the first march, however, criticism has turned toward the Women's March national leadership.

The most recent round of controversy can be traced back to February 2018, after Women's March co-president Tamika Mallory attended a speech by Louis Farrakhan, the head of the Nation of Islam, at that organization's Saviour's Day event. During that speech, Farrakhan declared Jews to be his enemy; as New York magazine laid out, that's a typical comment for him to make.

The Southern Poverty Law Center lists the Nation of Islam as a hate group, saying the group has a "theology of innate black superiority over whites" and that its leaders espouse "deeply racist, antisemitic and anti-LGBT rhetoric." However, its history is complex, as is its relationship to various black communities. The SPLC acknowledges that the group offers "numerous programs and events designed to uplift African Americans," and since it was founded in 1930, its members have developed a reputation among some as passionate, determined advocates for low-income and working class black people, and especially men, as Adam Serwer explained in The Atlantic days after Mallory's presence at Saviour's Day made headlines. Aside from Farrakhan, the Nation of Islam's most famous member was probably Malcolm X, though he later separated from the group.

During that Saviour's Day speech, Farrakhan also specifically praised Mallory, who was sitting in the audience. Mallory later defended her association with the Nation of Islam, explaining that she had attended Saviour's Day events for much of her life, and that the group supported her after her son's father was murdered. But when she declined to condemn Farrakhan specifically, there was an outcry — and Women's March co-chairs Linda Sarsour and Carmen Perez were also accused of having connections with the Nation of Islam.

In response to Bustle's request for comment, the Women's March pointed to previous statements posted on its website, including one that stated, "Women’s March is committed to fighting all forms of oppression as outlined in our Unity Principles. We will not tolerate anti-Semitism, racism, misogyny, homophobia, and transphobia and we condemn these expressions of hatred in all forms."

As a response to the accusations, the co-chairs posted a public message that said, "Minister Farrakhan’s statements about Jewish, queer, and trans people are not aligned with the Women’s March Unity Principles, which were created by women of color leaders and are grounded in Kingian Nonviolence." Sarsour added in a separate statement, "Every member of our movement matters to us — including our incredible Jewish and LGBTQ members. We are deeply sorry for the harm we have caused, but we see you, we love you, and we are fighting with you."

The Women's March leadership has maintained that they are against discrimination. But, they have also stopped short of explicitly condemning Farrakhan. “We don’t denounce or write off people or communities,” Rachel O’Leary Carmona, chief operating officer of the Women’s March, told The Daily Beast in November. “We denounce and fight evil and discriminatory ideas and policies. Not articulating that clearly and quickly has really hurt people and we deeply regret that.”

A December report by Tablet, an American Jewish magazine, ratcheted up the scrutiny even further. The report alleged that some of the Women's March leadership expressed explicitly anti-Semitic views days after the first march in 2017. Co-president Bob Bland denied the allegations in the report during a Monday interview on ABC's The View.

Differences Between The National Organization And Local Marches

As controversy has ensnared the national organization, some of the smaller groups that organized Women's Marches have experienced their own struggles. It's important to note that not all of the sister marches, which take place in towns and cities all around the United States, are directly affiliated with the national organization. Women's March, Inc., which oversees the D.C. march each year, is run by Mallory, Sarsour, Perez, and Bland. Fewer than 40 of the other marches around the country are formally connected to the larger organization, as The Post reported earlier this month.

"Women's March is an organic movement, made of the fierce energy and power of millions of women and those who support them," the national organization says in a statement to Bustle. "We're thrilled to see of hundreds marches sprout up in small towns, suburbs, and cities across America and around the globe."

"We invite everyone who supports gender equity and equality for ALL people to join us on January 19," the statement said. "All are welcome."

But several local Women's Marches have been canceled this year or are distancing themselves from the national organization for various reasons, with one citing a lack of volunteers, one saying participation was "overwhelmingly white," and another saying the anti-Semitism allegations have dampened sister marches' efforts.

In the meantime, The Washington Post reports that Women's March Inc. is attempting to trademark the Women's March name, prompting concerns among unaffiliated chapters who worry about the implications of just one group owning those rights.

“There’s nothing that we are doing that other organizations that have decentralized networks haven’t done,” Sarsour told The Post in response. “It’s a larger conversation about how does an organization continue to operate with decentralized leadership and autonomous chapters across the country? How do you maintain a unified message and unified platform?”