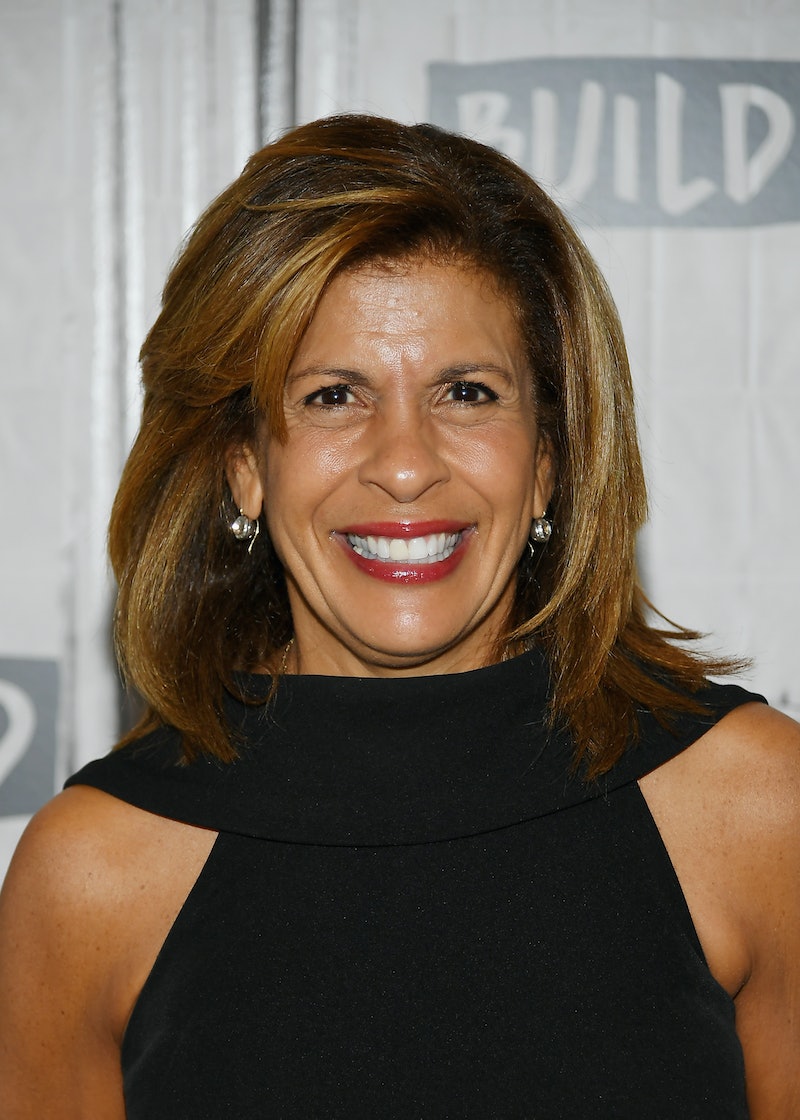 Congratulations are in order for Hoda Kotb. According to People, Hoda Kotb adopted a baby girl, Hope Catherine, which makes the Kotbs now a family of three (the morning show host previously adopted her daughter, Haley, in early 2017). And the Today Show anchor's announcement detailing her happy news, which she made on the morning program, is filled with nothing but love.

On April 16, Kotb surprised the rest of the Today Show crew by calling in to announce that she's welcomed another daughter into her family. Her co-anchor, Savannah Guthrie, who was previously told about the milestone moment, introduced the mom-of-two, asking her, "Do you have something to tell us?" Of course, Kotb did indeed have something incredibly special to share with her co-workers, and all of the Today Show's dedicated viewers.

"It's a girl! And her name is Hope," she replied, which left everyone overjoyed and, understandably, a little emotional. The anchor revealed that her daughter's full name is Hope Catherine Kotb, with her middle name honoring the daughter of her best friend, Karen. She went on to say that she's "so happy" that her little one is here and that the rest of the family, including Haley, who's taking her big sister duties seriously, and her boyfriend, Joel Schiffman, are also totally enamored by Hope.

At one point, Dylan Dreyer, a fellow anchor on the news program, asked "Hoda, did you ever think that your heart could give more love than you already have given?" To which Kotb replied:

"You know what's funny? You think that you're full. That's exactly how I felt with Haley and Joel and everything. And Joel and I were standing there when they hand you the baby and it's the closest thing to a live birth I think you'll ever see. But, anyway, in that moment I was like, 'Oh my god, my heart just grew ten times!' I can't believe it's happening, y'all, I really can't."

The official Today Show Instagram account posted a photo of Kotb, who was all smiles, along with her two daughters. They captioned the photo, "Congratulations are in order for @hodakotb, who adopted a second little girl, Hope Catherine, this week."

Interestingly, Kotb previously hinted at her good news on April 15 in one of her Instagram posts. She posted a simple photo that showcased the words, "Choose Hope," which is an obvious, and direct, tie back to the newest member of the Kotb crew.

In advance of Mother's Day in 2018, Kotb opened up to People about raising her adorable daughter Haley and just how much motherhood means to her:

"Work has ridden sidecar right next to me my whole life, and now it’s time for a baby seat to be here. I enjoy work and I love it and I put my heart and soul into it when I’m there, but my true heart is with [Haley], all the time now. I love being able to say it out loud, that my time with her is the most important thing — more important than work and more important than anything.”

Coincidentally, she also addressed whether she would add another child to her family sometime in the future, saying, "Well, how should I say this? I guess ‘Never say never’ is the right way to put that!”

Luckily, Kotb didn't say no to adopting another child, as the Today Show host is clearly overjoyed to have welcomed baby Hope into her lovely fam.