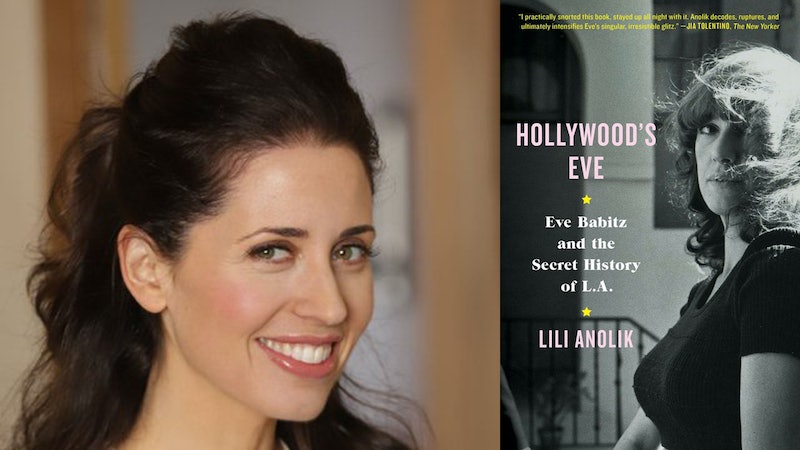 Each month, the Bustle Book Club asks an author to recommend a book they think everyone should read. For March, Seduction author Karina Longworth recommended Hollywood's Eve by Lili Anolik Follow along with the book club on Bustle and join the conversation on Goodreads.

"As an artist and an original," is how Lili Anolik describes Eve Babitz to Bustle. "There’s nothing remotely girl-next-door about Evie." After reading Hollywood's Eve, you'll certainly agree. She is unlike anyone you've ever known — in fiction or in real-life. In her earlier years, she was the ultimate L.A. It girl, with a punch: She was also a brilliant writer, and artist in general. And when she used her dizzying talent to write about her too-glamorous-to-be-true life, it was magic. But her writing never really earned recognition from the literary establishment, and her books — all memoir under the guise of short story collections and novels — went out-of-print. And in the late 1990s, she suffered an accident that left her with burns on much of her body. She locked herself away in an L.A. condo. The It girl was no more.

That is, until 2014, when writer Lili Anolik turned the spotlight on Eve Babitz in the Vanity Fair profile "All About Eve... And Then Some." Suddenly, everyone wanted a piece of Evie.

Since the profile was published, New York Review of Books Classics and Counterpoint Press reissued several of Babitz's books, TriStar/Hulu announced plans to adapt her work into a TV series, and Lili Anolik kept talking to Eve Babitz and trying to figure her out. This year, Anolik published Hollywood's Eve.

In an interview with Bustle, Anolik talks about her personal relationship with Eve Babitz and shares her thoughts on why the writer has suddenly experienced a resurgence in the era of #MeToo — read it below:

Bustle: What sparked your interest in Eve Babitz's work?

Lili Anolik: In 2010, I read a quote of Eve’s — I don’t remember the exact quote, but it was, of course, about L.A. and sex — and I was immediately besotted. Who was this Eve Babitz woman and what was her work like? I had to find out. All her books were out of print. I was able to track down one, though, and I just went nuts for it. The sensibility was idiosyncratic and unexpected, the prose was raffish yet elegant. And I loved how she wrote about Los Angeles.

There was very little information about Eve personally back then, but there was just enough — the nude photo with Duchamp, the album covers she’d designed, the ultra-glamorous list of conquests — to make me want to know more.

It took you quite a while to get access to Eve, and when you finally did, your first encounter lasted under an hour. At that point, what was going through your mind, and did you think you would be able to salvage whatever story you were forming?’

Under an hour? Try under half an hour! It was brutal. We met at the agreed-upon restaurant, she mumbled hello, ordered, inhaled the food, then wanted to go. I mean, she barely waited for me to pay the check. And I’d flown all the way from New York for this meal, which, by the way, took two years to get her to agree to. I felt like I’d blown it. I was beyond upset. But she took my phone call the next day. And every day after that. And that’s how our relationship developed. I’d see her every six to eight weeks when I was in L.A. Really, though, we got close over the phone.

"There was very little information about Eve personally back then, but there was just enough... to make me want to know more."

I felt that Eve gave me the keys to the city, weird as that sounds. I grew up in Boston but I was always fascinated by L.A. Maybe because, as a kid, I was so movie-mad, so Raymond Chandler-mad. And I actually lived in the crummy part of Beverly Hills in my early 20s. I loved L.A., but I never felt I understood L.A. I always found L.A. elusive. Like, there was a there there, only I couldn’t locate it, if you know what I mean.

"I felt that Eve gave me the keys to the city, weird as that sounds."

With Eve, though, I suddenly had access. It was the access provided by her memories and stories. With Eve, through Eve, I was allowed not just into the city, but into the past (which I discovered is where I really wanted to be), as well. Vicariously and retroactively, I gained entrance. Eve took me when she told me about a girlfriend of hers named Marva who, as a high school sophomore at Beverly Hills High, convinced her Socialist mom to shell out for rhinoplasty (“Nose jobs had just got invented. Jewish girls were just starting to get their noses done”). Or about the wife of her first serious boyfriend, the actor-turned-director, Brian G. Hutton ("she was a junkie with a gold Rolls Royce"). Or about pigging out on blueberry pancakes doused in blueberry syrup at Ships Coffee Shop with Jim Morrison (“he never really stopped being a fat kid”). So, yeah, Eve allowed me to actually experience a bygone L.A. That was huge.

Why do you think Eve is having such a resurgence in popularity, despite the fact that her ethos — if she ever had one — seems fairly contradictory to our current moment?

This is something I think about all the time. Why is Eve resonating now, two decades after she stopped writing? If anyone seems antithetical to the #MeToo moment, it’s her. "All I cared about anyway was fun and men and trouble," says the Eve stand-in in L.A. Woman. Yet she’s blown up. And she was more or less ignored during her actual career, in the post-Pill-pre-AIDS, loosey-goosey '70s, when her sensibility and the sensibility of the times were in perfect sync. I don’t know how to account for it. Beats me, is probably the most honest answer I can give.

I do, however, have a theory and it’s that there’s a mood of the moment and then there’s a mood underlying that mood. And when you tap into the underlying mood, you’ve really got something. For example, Joan Didion, who's something of a doomsayer, got big in the late '60s, when the hippy-dippy, free-love movement was its height. So, in that context, Eve’s catching on makes a kind of counterintuitive sense.

I was particularly struck by the contradiction between Eve Babitz’s external and internal attitudes to her work. Before she began writing professionally, she created cover art for albums — art she dismissed as mostly for fun, but art that her friends say she took very seriously. She also took her writing incredibly seriously, often writing nine or 10 drafts of something. Why do you think she perceived that being dedicated to her craft ran counter to her persona?

Making it look easy and no-sweat was part of Eve’s code — aesthetic code, yes, but also moral code. And, of course, effortlessness, or rather the appearance of effortlessness, takes huge effort. That’s why Party Girl was really a disguise she wore. Sure she went out and got around, but she was always home early because she wrote in the morning.

Eve Babitz’s writings are short stories, but all seem to be deeply rooted in her own personal experiences. How did you use her writing to inform your biography of her?

Apart from her book on tango and her book on Fiorucci, all Eve’s books are billed as short story collections or novels — as fiction, in other words. None of them are. They’re all memoir or personal essay. So of course I took many of my cues from them. I would always check with her to make sure something from a book actually happened. It almost always did.

"Making it look easy and no-sweat was part of Eve’s code — aesthetic code, yes, but also moral code. And, of course, effortlessness, or rather the appearance of effortlessness, takes huge effort."

Eve Babitz has been mostly hidden from public view in the 20 years since an accident left her badly burned. Do you think she’ll ever return with another book?

Well, I know New York Review Books Classics is bringing out a collection of Eve’s uncollected pieces later this year. But if you’re asking me if I think there will be another book of original writing, the answer is no. There’s a stark divide in Eve’s life: pre-fire, post-fire. She dropped that cigar in her lap in 1997 and suffered third-degree burns over half her body. The fire killed her ability to write. Or her desire to write. Probably both.

Did Eve read this book? What’s been her reaction to the crescendo of public interest in her and her work?

I gave a late-stage draft of the book to Eve’s sister Mirandi, to Eve’s cousin Laurie Pepper, and to Eve’s main, main squeeze Paul Ruscha. This was really for fact-checking purposes. I mean, I wanted to make sure I was getting things right. I did not give Eve a copy of the book. It felt like to do so would be rude or presumptuous or something. I know she was pleased with the profile I wrote about her for Vanity Fair. So, I guess, that has to be enough for me. If she ever asks to read the book, though, I’ll send her a copy immediately.

I think Eve is delighted and dismayed by the attention in equal measure. Her whole life she was ambivalent about fame. That she’s suddenly become this iconic figure, this canonical figure is weird for her, jarring. One of the few things she’s said to me on the subject is, “You know, publicity is great, but not when you’re in your '70s.”

What are some other books you would recommend for book clubs who enjoyed reading Hollywood's Eve?

I really believe that Eve and Joan Didion should be read together. One is the yin to the other’s yang. They wrote about the same time and place, and, in some instances, the same people. I mean, Didion dedicated The White Album to Eve’s bête noire/raison d'être, Earl McGrath! The ending for Play It as It Lays derives from a story Michelle Phillips told at a party at Eve’s place that Didion happened to overhear! Eve and Didion had an almost identical view of L.A. and yet their visions of L.A. are antithetical. So to get the full picture of L.A. we need both accounts. Which is why I would recommend Play It as It Lays and The White Album. I’d also recommend Janet Malcolm’s book on Sylvia Plath, The Silent Woman.

What are some of the ideas you hope book clubs explore in their discussions of Hollywood Eve's and the work and legacy of Eve Babitz?

How about I pose a few questions:

Hollywood's Eve is available now. Follow along with the book club on Bustle and join the conversation on Goodreads.

More like this
Candice Brathwaite Is Over Using Her Own Life For Material
By Shahed Ezaydi
10 Must-Read New Books Out This Week
By K.W. Colyard
The Most Anticipated Books Of August 2022
By K.W. Colyard
We’ve All Had Bad Sex. Nona Willis Aronowitz Is Talking About It.
By Sophia Benoit
Get Even More From Bustle — Sign Up For The Newsletter